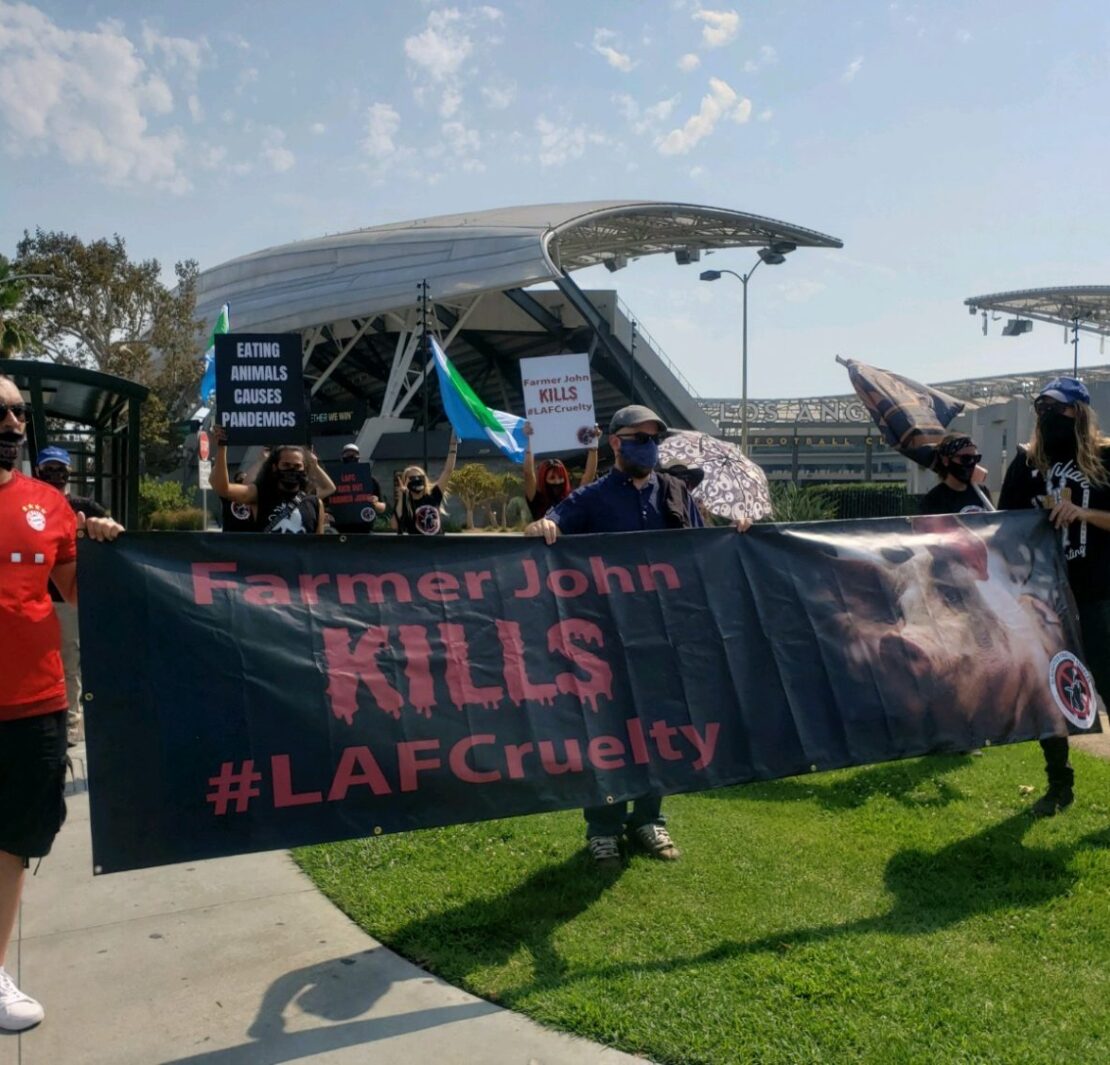 Why would a football club continue to partner with a company where lots of local workers have gotten COVID hotspot to celebrate the local community? That’s what protesters are demanding to know. Activists representing Slaughter Free Los Angeles took to the streets to denounce a major sports franchise’s partnership with LA’s massive Farmer John pig slaughterhouse, a meat processing plant owned by Smithfield, which is in turn owned by a Chinese conglomerate, reportedly the largest Chinese acquisition of an American company to date. The Farmer John slaughterhouse has been widely reported to be a coronavirus hotspot with a contentious relationship with the mostly Latino workforce and its union. In April, the Los Angeles Football Club (LAFC) announced multi-year partnership with Farmer John to be their meat supplier for their games starting with the 2020 season.

“We are so excited to welcome Farmer John to the Black & Gold family,” said LAFC President and Co-Owner Tom Penn in a statement on their website adding, “Through its partnership with LAFC, Farmer John is excited to shine a spotlight on those in our community who are serving theirs with this year’s launch of ‘L.A. Familia,’ a community-focused campaign that celebrates the diverse individuals and organizations within the broader LAFC family who use their love of the game to support and improve their local neighborhoods.”

But, protesters point out that Farmer John has a huge Latino workforce and many workers have gotten COVID-19. Still other workers are fearful of getting it.  Farmer John is well known to be a major hotbed of COVID-19 in the Los Angeles area. The LAist, Los Angeles Times, and several other mainstream media news organizations, have reported extensively on this outbreak and the disputes between labor and management over it.

Labor disputes as the pandemic hit!

In an article dated May 25th, 2020, the Los Angeles Times reported, “The union that represents workers at a Vernon meatpacking plant where at least 153 have come down with COVID-19 called Monday for the immediate closure of the facility, saying there was no evidence measures taken to control the coronavirus were working. The outbreak at the Farmer John plant, a division of Smithfield Foods that produces Dodger Dogs and other pork products, is by far the largest in Los Angeles County to occur outside of a nursing home, prison or other residential setting, according to data from the county’s Public Health Department.” The union representing most of the plant’s almost 2,000 workers charged the company delayed “protective measures until workers were sick and has not been transparent about what it knows about how and to whom the virus is spreading within the facility.”

Smithfield disputed this, saying they were taking actions as quickly as they could and were implementing protective measures that followed or exceeded CDC and OSHA guidelines, including protective gear, Plexiglas barriers and temperature screenings.

One might say… it’s a life or death issue. So, protesters found the claim by the football club that they are celebrating “La Familia” and supporting the local neighborhoods with their partnership with this Chinese-owned meat company, bizarre and hypocritical. “Killing is no kindness,” said one protester referring to the thousands of animals who die at the slaughterhouse and the people who’ve fallen ill and risk death from COVID-19. Protesters are demanding the LA soccer franchise immediately end its partnership with Smithfield and vow to continue protesting. Representatives of the LA Football Club and Smithfield are invited on any time to respond.

Slaughter Free Los Angeles urges the LAFC to choose compassion over violence. Farmer John kills upwards of thousands of pigs per day at their facility near downtown LA. These pigs are babies, about 4-6 months of age, when they area slaughtered. In modern day animal agriculture, baby piglets may have their teeth cut, their tails chopped, and males may have their testicles removed, often without anesthesia. Pregnant and nursing pigs may also live in crates so small that they can’t turn around even to look at their piglets. Pigs are innocent, smart, sentient beings who greet humans with curiosity and affection. As soon as they grow large enough they are transported to slaughter on trucks where they go without food and water. Some are badly injured during transport to the slaughterhouse. Then, they all die.

Given that we are now in a global health and economic crisis due to COVID-19, a zoonotic disease that jumped from animals to humans, the world is waking up to the dangers posed by human abuse of animals, both in the wild and in factory farms.  As the pandemic worsens in California, activist groups urge corporate America to choose partnerships that protect the public, animals, and the environment.

Activists say, if the LAFC wants to be “a force for good,” as stated in their mission statement, they should end their partnership with a company that produces carcinogens as classified by the World Health Organization. This includes processed meat products like hotdogs, bacon, sausage, and other pork products. According to the WHO, processed meat is cancer causing.

The members of the LAFC team are primarily people of color. So are the workers inside Farmer John. Many slaughterhouse workers take jobs in these killing factories out of desperation to feed their families because they have difficulty finding other work. Slaughterhouse workers often experience physical injury and permanent psychological trauma.

Protesters urge the public to urge the LAFC to reconsider their partnership with Farmer John, to ask the sports league to live up to its mission statement of “promoting health and well-being” by choosing a plant-based meat supplier for their games instead.

We invite any corporations mentioned to appear and respond at any time.