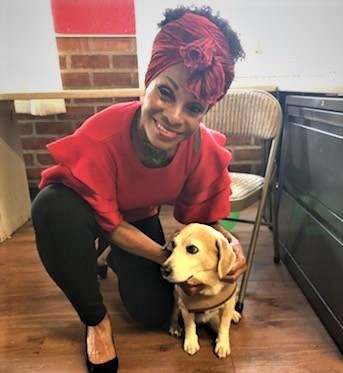 #JaneUnChained #LIVE at #VeganToastmasters in Los Angeles as vegan advocate extraordinaire Chef Babette of Stuff I Eat Restaurant in Inglewood rocks it! Chef Babette shares her story. Tune in and check it out!
Chef Babette’s had a difficult childhood with her caretakers. Her mother had three jobs so she was left with other adults to care for her. She suffered abuse from her godmother and her stepfather sexually abused her. She had a rough childhood to say the least. She had trouble with breathing and sleeping due to the trauma. She was also raised eating unhealthy animal products like sweets and dairy products. She was addicted to sugar and dairy, and she became addicted to drugs in her adult life. Chef Babette said she was a literal “crackhead.”  She had trouble with intimacy in romantic relationships and dating. She says she has figured it out now that she is on her fourth husband of 30 years, who also taught her how to eat well. She read the books he gave her,”Fit for Life,” by Harvey and Marilyn Diamond, and “Mucusless Diet Healing System,” by Arnold Ehret. She felt better when she changed her diet and she transitioned to veganism at the age of 40!
Chef Babette explains that she did not go vegan for the animals. She could have cared less about animals at that time. That was until she realized that it is our species’ responsibility to share this planet and protect other animals. She says that we undertook that responsibility to other animals as soon as we learned to walk upright. She realized that she could not separate herself from the whole picture. Chef Babette is calling for the evolution of mankind. We need to stop being selfish and extend compassion to all living beings. We lost all of those animals in after Hurricane Florence in North Carolina because of our selfishness. She says, “We have to do better than this.” We could not agree more.
Chef Babette found out she had a knack for cooking, so she cooked and let the public try her cooking. People loved it! She and her husband went into Stuff I Eat Restaurant and talked to the owner and the rest of the story is history. She emphasizes that she didn’t have any money, but she still made her dreams happen. She says when they opened they didn’t even have chairs and tables. But they stuck with their mission and they worked very hard. Now the restaurant has been open for 10 years in an area where vegan food was unheard of! Chef Babette says that most of her customers are not vegan. Her husband says that food is about taste and texture. Past that, people don’t care if there are animal products on the plate.
Amazingly, Chef Babette is 68 years old! She is super fit! She eats well and she keeps moving. This woman can do a four-minute plank, and Jane is her witness! She says you have to take care of yourself.  Keep your core tight. It’s not too late to make changes that will improve the quality of your life. We are going to take any advice she will give us, because well… Look at her as she radiates life! Chef Babette is incredibly inspirational and we appreciate how articulately she shared her story and her life’s passion for compassion and nutrition with us today!
See Also
Feminism