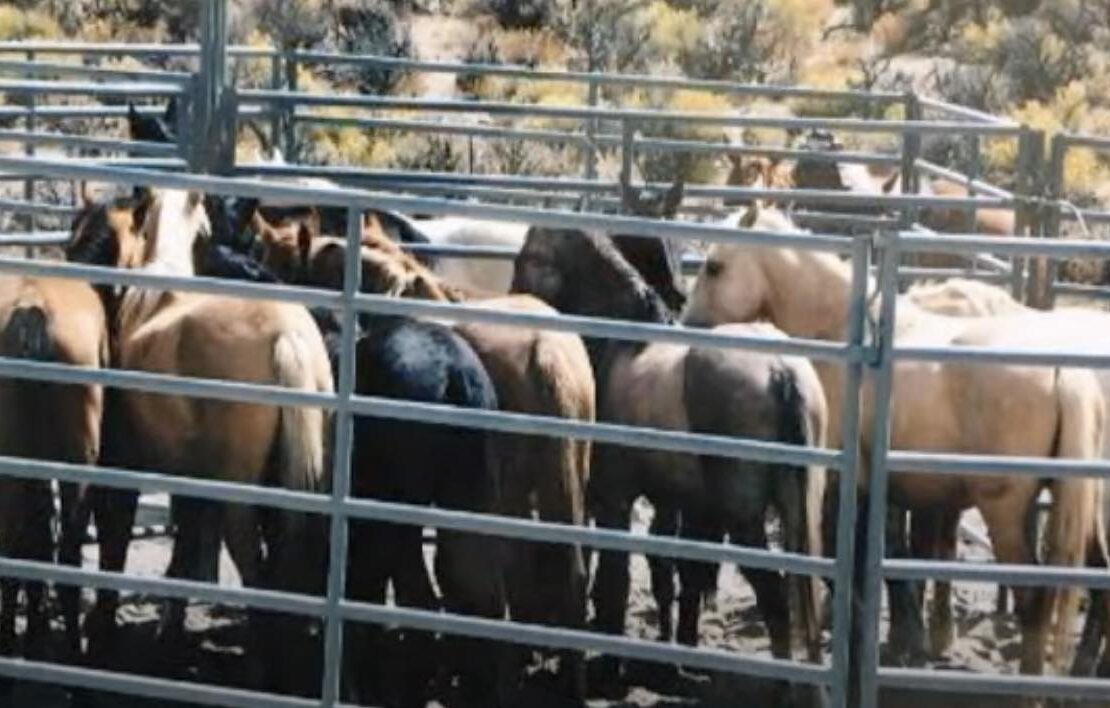 By Craig C Downer, wildlife ecologist and wild horse and burro advocate
America’s wild horses have been betrayed by our own government, which is working for the cattle industry and ignoring the will of the people, who overwhelmingly love wild horses.  The Wild Free-Roaming Horses and Burros Act of 1971 (WFHBA) is supposed to protect America’s wild horses.  Instead, the Bureau of Land Management, a branch of the US Department of Interior, has betrayed the wild horses and is sabotaging their legal habitats. And the same goes for the US Forest Service, the other agency charged with upholding this Act’s very noble and ecologically restorative provisions, and which is a branch of the USDA. The situation is dire for our wild horses! They need YOUR help NOW!

US Agencies Favor Animal Agriculture/Ranching Industry, which Wants the Land!

These cruel horse roundups are based on the rancher attitude toward these highly evolved and beneficent animals and do not reflect the naturalist approach to life that is at the heart of the Wild Free-Roaming Horses and Burros Act! The roundups harm the horses and burros both physically and psychologically and the scars of the unnecessary trauma they cause remain with the “gathered” horses and burros for the rest of their lives, frequently as an equine form of PTSD.

The so-called “Path Forward” plan presently adopted by the infamous Bureau of Land Management and USFS is, in my professional opinion as a wild-horse ecologist, a “wipeout” plan, in that it “wipes out” generations of natural adaptation to the particular ecosystems from which these equines came. Basically “natural selection” is being replaced by human’s “artificial selection” of who remains and who doesn’t, of who reproduces and who doesn’t, which is entirely contrary to the true intent of the Wild Free-Roaming Horses and Burros Act!

The Wild Free-Roaming Horses and Burros Act gives a clear mandate that we humans should let the horses be themselves on the public lands and give principal resources to them in their legal areas, which originally were about 12% of BLM and USFS lands, but have been reduced by many millions of acres since the passage of the Act fifty years ago. The BLM and USFS have adopted a 10-year plan to reduce the wild horses to about 20,000 and the wild burros to about 6,000 throughout all of the 12 Western states where they should have legal rights to be the principal resource recipients. This amounts to at least 54 million acres, though the original legal area would have been much bigger.

Wild Horses Squeezed Out of Land for Cattle Industry!

Now, government policy is to only allow wild equines on 26,600 acres of BLM lands and a paltry and severely reduced several thousand on US Forest Service lands. Upon these greatly reduced Herd Management Areas (BLM) and Territories (USFS), our government officials are allocating almost all of the forage and other survival resources to livestock, principally cattle and sheep, as well as to mining and energy companies, etc. Click here for a revealing article.

When the wild horse and wild burro herds are broken up, the family units suffer terribly and many go into a depression and die. Also depriving those traumatized horses and burros that remain on the public lands in grossly reduced numbers of the wisdom and guidance of older mares and stallions reduces their ability to survive. Also, the genetic viability is terribly undermined putting them at serious risk and compromising their adaptability to ongoing changes in the climate, ecosystem, etc. This is the very opposite of what the Wild Free-Roaming Horses and Burros Act mandates! In fact the horses and burros in their natural state greatly help combat Global Warming by reducing flammable tinder, building soils, seeding plants and sequestering Carbon. See Craig’s recent science-based article.

The large-scale and excessive removal of America’s last remaining, underpopulated wild horses and burros is actually having a detrimental effect upon the life-supporting ecosystem, often referred to as “the environment.” These equids restore balance and help heal overgrazed, eroded, and species-poor life communities by enriching soils, seeding a great variety of plants and contributing their mortal remains to the food web, including predators such as wolves, mountain lions and bears, as well as scavengers such as foxes, coyotes, and vultures.

Because of their larger and more powerful bodies and their extensive and frequent movements, wild horses also open up thickets so that other animals, such as deer, benefit, break ice and frozen crusts on frozen water and forage, again to the benefit of many smaller, weaker animals. Their broad home ranges result in greater dispersal of many diverse plant species that find a fertile germination bed in equid feces. Also, equid feces increase the water-retaining abilities of soils because they increase their humus content; this has the much-appreciated effect of dampening out incipient wildfires, such as are caused by lightning strikes, campfire cinders, etc. For more in-depth information on this very important aspect of wild horses and burros, see Chapter II of my book, The Wild Horse Conspiracy.  Please visit thewildhorseconspiracy.org to get involved. Also check out my scientific, peer-reviewed article on this issue.

DONATE HERE TO SUPPORT THE GENTLE ALTERNATIVE AND END HELICOPTER ROUNDUPS.
It is imperative that the Public rise up to protest the grossly unjust, illegal, and cruel policies toward our nation’s national heritage species, the wild horses and burros. People must contact the BLM and USFS officials, their Senators and Representatives, both national and state, their local, county and city governments, their state Governors, the media, including newspaper, radio and TV as well as spread the alarm among the social media. Bills must be introduced to reform the agencies charged with protecting and conserving the wild horses and burros by getting people who really appreciate and care about them and their place in the natural world into positions of authority. Support should be given to the author’s Reserve Design proposal, which will implement the true and core intent of the Wild Free-Roaming Horses and Burros Act, contrary to other proposals that only subvert this noble law’s true and core intent.
CLICK HERE to help the gentle alternative Reserve Design project, which has been ongoing for several years!

Here are some contact links: https://www.usa.gov/elected-officials
US Congress Switchboard for both Senators and Representatives: (202) 224-3121.
US House Appropriations Committee: (202) 225-2771.
Bureau of Land Management, National Acting Director (303) 674-7254.
Secretary of Interior (over BLM) Debbie Haaland, 1849 C St., NW, Washington, DC 20240. Tel. (202) 208-3100 ext. 3. Email: feedback@ios.doi.gov.
Secretary of Agriculture and the head of the US Forest Service. See https://www.fs.usda.gov.
Finally, I urge you to take actions to protect, preserve and restore America’s precious wild, naturally living horses and burros together with their complete and viable natural homes. Become an active defender of one or more wild horse/burro herds and their HMAs by going to www.blm.gov and familiarizing yourself with this agency’s wild horse and burro program and do likewise for the US Forest Service at www.fs.usda.gov. Here’s the full interview by #JaneUnChained host Lindsey Baker with Craig Downer.
Craig C. Downer is a wildlife ecologist who has specialized in the Mammalian Order Perissodactyla. This Order includes the Horse Family, Equidae, as well as the Families Tapiridae and Rhinocerontidae. While earning his M.S. at the University of Nevada-Reno, he did a field study and paper on the Pine Nut Mountain wild horses. And later in his career he did a professional herd and habitat analysis of these unique wild horses that have a strong Spanish Colonial component. Craig worked with Wild Horse Annie (Velma Bronn Johnston) in the 1970s when the Wild Free-roaming Horses and Burros Act (WFHBA) was first being implemented. He has done pioneering work on the endangered Andean, or Mountain, Tapir, and written an IUCN SSC action plan/species description and several scientific papers on this wonderful herbivore in the same order as the horse. His webpages are thewildhorseconspiracy.org and andeantapirfund.com. He has been a plaintiff in several major cases defending the wild horses and burros in the wild, including successful rulings. He is familiar with wild horse and burro herds in all of the Western States and has taken many beautiful photos. Check out a praised film he guided that reveals major points and shows the wild horses. It’s entitled The Mustang Man.
To get involved, please contact:
Craig C Downer
Andean Tapir Fund / Wild Horse and Burro Fund, P.O. Box 456, Minden, NV 89423.
ccdowner@aol.com. (775) 901-2094 cell.

A Love Affair With Vegan Pudding

Activists March in a Memorial for Dead Horses in Santa Monica

You Can Save America’s Horses from Slaughter!