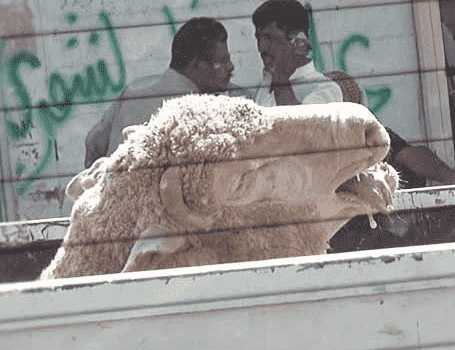 Australia & China Inching Closer to Horrific Live Export Deal… IT MUST BE STOPPED!

Send a message to the Australian embassy in your country.
Please visit Ban Live Export for more information about Australia’s grisly live export trade and to find other ways you can help. Spread this link to your animal loving friends. Organize protests outside Australian government offices. Boycott Australian tourism!
For the past several years, Australia and China have been working on an agreement which, when signed, could lead to Australia shipping up to one million live cattle to China each year. The deal is being finalized at a time when local and international opposition to live exports has reached a fever pitch due to the extreme animal abuse exposed in undercover investigations.

[wpvideo XB4i5wo5]
Tanya Hardy, a veteran activist in Australia, talks about the deal with China and the cruelty of live exports.
According to Animals Australia, “Most animals who are exported live for slaughter have their throats cut while fully conscious. Millions have died at sea. Some 30 investigations have revealed that in destination countries, many animals endure routine abuse and brutal slaughter in places where laws do not protect them from cruelty.” Following is one of many examples of extreme suffering experienced by animals exported from Australia.
Australia’s live export controversy has not received much media attention in the U.S., but the impending $1 billion deal with China is so substantial that the New York Times wrote a story about it. At the end of the lengthy article, the Times mentions – and virtually dismisses – the humane issues, leading readers to believe that they have been adequately addressed:
“The leader of the exporters’ group, said that all animals exported from Australia were closely tracked and that there were strict regulations about their welfare before export, during shipping and even after they landed in a foreign country. The regulations were tightened after export bans were imposed after accusations of cruelty in some Indonesian slaughterhouses.”

ANIMAL RIGHTS NEWS IS SPREADING ITS WINGS AND TAKING OFF!