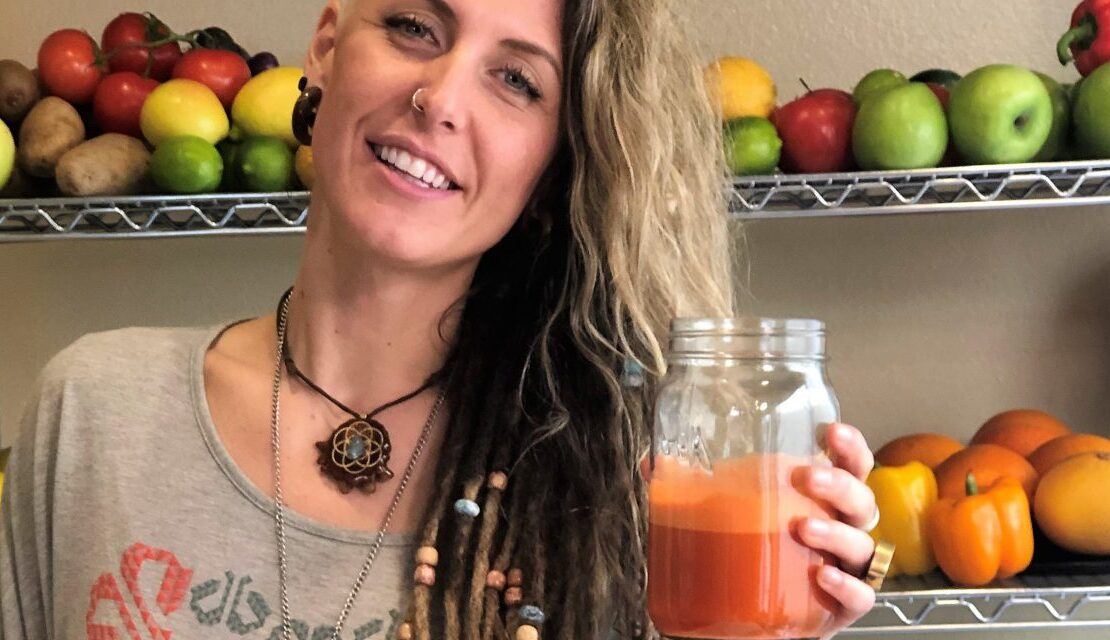 #LunchbreakLIVE with Amy Millar, health coach, trainer, certified in the jungles of Costa Rica and booked solid yoga instructor is on a mission to heal all sentient beings through energy, and it’s working! When she’s not on The Playa at Burning Man healing the lovely human souls she’s advocating for the voiceless. Amy Leanne maintains optimum health by juicing her Green Rocket and Orange Blast juice daily while she meditates and prepares for her yoga practice. Then she’s off to save the world by 6 a.m. “Amy hopes to reach as many people as possible through multiple platforms, in an effort to improve the overall wellbeing of Humans, Animals and the Planet on a physical and energetic level.  It is Her intention to consistently elevate our collective consciousness while raising the planetary vibration.”

It’s all about the orange color today as Amy grabs some carrots and oranges to make her “orange rocket juice.” She says that she hopes everyone will be inspired to get on the “juicing train,” because it has helped her so much health-wise.  Amy says that she can’t even put into words the difference you feel when you start juicing. Her skin’s complexion, gut health, and has improved leaps and bounds since she started juicing. She says juicing is her life force! Amy explains that the peel of the orange actually has more nutrients than the flesh inside the orange, but most people find it too bitter to consume. She recommends her Rebel brand juicer for beginners because it is easy to use and clean up afterwards. Patrizia says the juice is “nice and smooth” and tastes so good. Try making your own juices at home with Amy’s special juice recipes below!

A Woman’s Vegan Journey Started With A Heart Attack At 32!