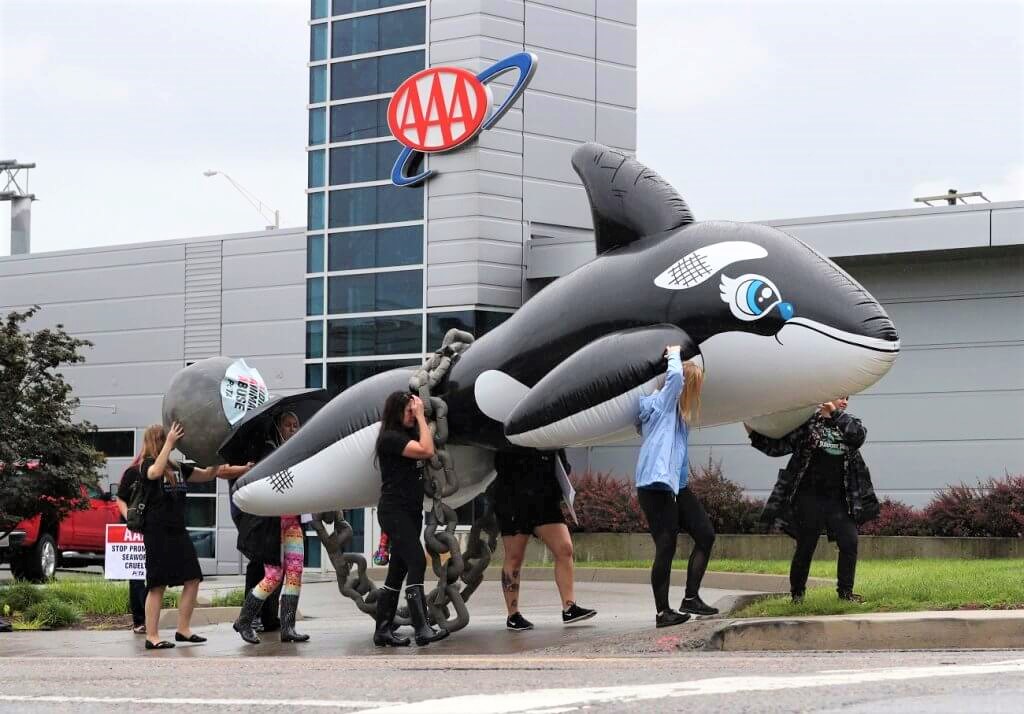 JaneUnChained LIVE in Los Angeles where local animal rights activists are gathering at AAA – Automobile Club of Southern California to urge SeaWorldAAA to end its affiliation with SeaWorld. Activists feel AAA encourages members to visit SeaWorld by offering deep discounts to the amusement park! Several dozen major companies have already ended their partnerships with SeaWorld, and the activists want AAA to do the same.

Brittany Drake, the organizer of DXE Los Angeles, explains that the AAA Headquarters in Southern California is the perfect place to hold this protest because California is the largest consumer of SeaWorld tickets. Lead organizer and Outreach Coordinator for PETA, Matthew Braun, explains that people were outraged when the documentary “Blackfish” was released, detailing the life of a captive orca, Tilikum, and the “cruel treatment” of the species in captivity. One orca, Corky, is 54 years old and has been living at SeaWorld San Diego for 50 years. Matt also cites a case where a wild-caught orca named, Hugo, died in 1980 of a brain aneurism after regularly ramming his head into the side of the tank he was held in at Miami Seaquarium. Orcas swim up to 100 miles per day and these tanks are nowhere near the amount of space they would swim in their natural habitat, the ocean. Whales in captivity often have collapsed dorsal fins, said to be a sign of the reduction of swimming activity due to the confined space.
Many companies have cut their affiliations with SeaWorld because of the reported mistreatment of animals that has been exposed in their facilities. Activists are here to ask AAA in every state to do the same, starting right here in California. Please help save these unfortunate sea creatures and get involved with the information below.
Automobile Club (AAA), SeaWorld, and Miami Seaquarium representatives are invited on to respond at any time.
Text AAA to 73822 for the link to let the CEO of AAA of SoCal, John Boyle, to stop supporting SeaWorld!
Call your government representatives in support SB313 to ban the use of animals in circuses in California!
Follow Peta LA on Facebook!
Follow DXE Los Angeles on Instagram and Facebook!
Attend the next protest in Huntington Beach!
Email Matthew Braun at matthewb@peta.org for more information.