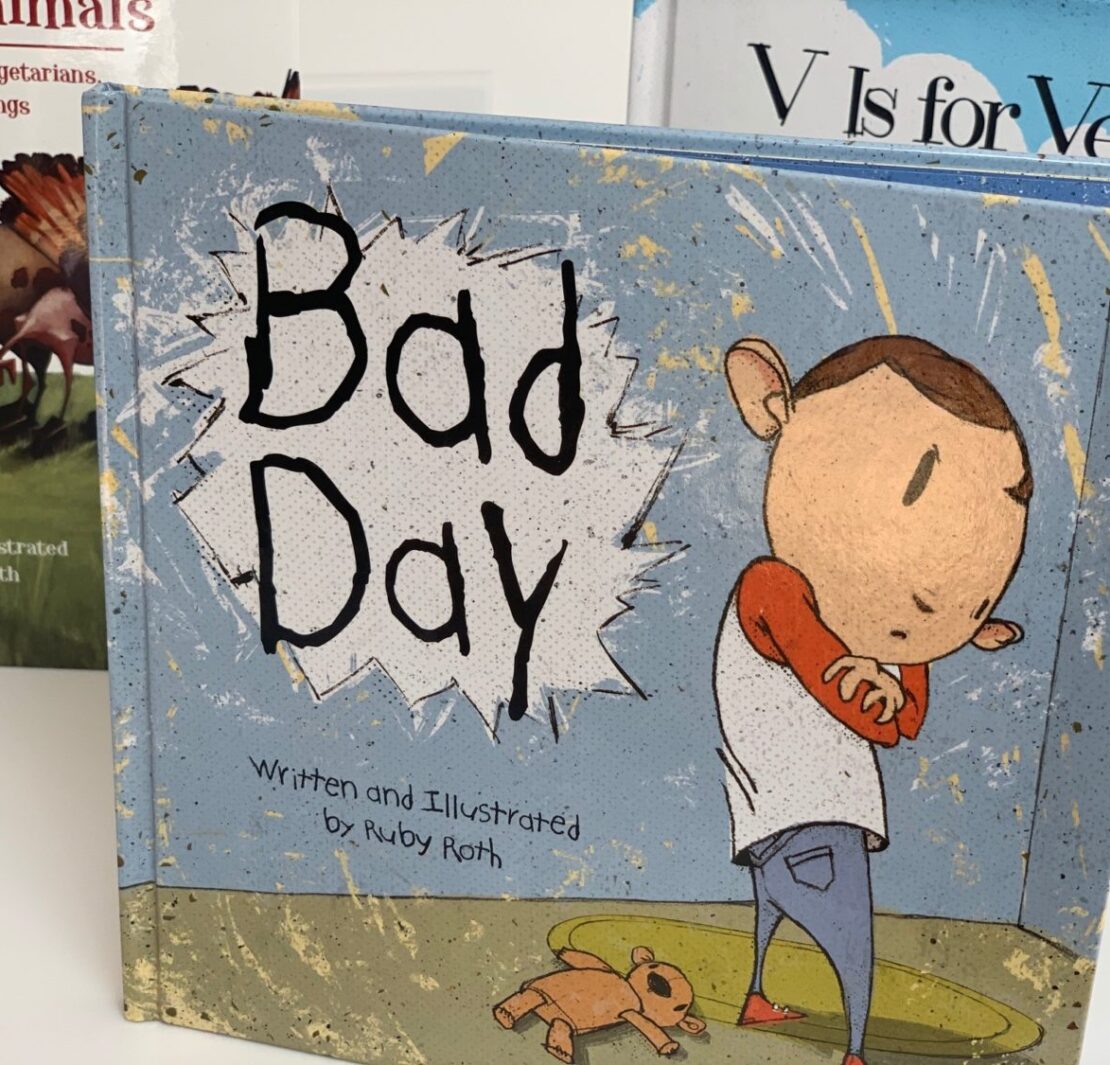 LunchBreakLIVE with the acclaimed author/artist Ruby Roth making fast and furious tomato soup! The recipe is from one of Ruby’s many children’s books, the Help Yourself Cookbook for kids! The soup’s called “Tomato Tornado!” Ruby has done numerous books, both writing and illustrating! These were the first books of their kind (vegan, non-fiction) in children’s literature! Check out this amazing woman’s journey!
Ruby has been vegan for about 17 years! She was an activist for social injustice when her friends called her out on her eating habits, saying they did not align with her ethics. Then she watched the eye-opening documentary Earthlings and realized they were right. She also realized that she could have the most impact as a vegan activist. Now, Ruby expresses her activism as the incredibly talented writer and illustrator of extremely popular vegan books for kids! A couple of the titles you may recognize are Vegan Is Love and V is for Vegan: The ABC’s of Being Kind, and That’s Why We Don’t Eat Animals. Today is the release of her newest book Bad Day! This book focuses on the emotional wellness of kids, especially vegan kids who may be frustrated with the world around them.
Her inspiration for becoming a children’s books author came from her work teaching kids at an after-school art class. She tried to find a suitable vegan book for kids and came up empty. So, she decided to create her own books to address the devastating injustice animals experience every day. But, Ruby was determined to do this with a gentle, educational approach. Check out Ruby’s newest book and her other amazing books via the links below. You can even get an autographed copy! Jane says, “Every child should read these books!”
Today, Ruby is making us a “Tomato Tornado!” Ruby says she has a cooking style of “throw a little of this and a little of that” into the mix. She heats up some onions and huge heirloom tomatoes, chopped in large chunks, to start. Then, she sprinkles in a variety of spices, including sea salt, oregano, and fresh basil. Once the ingredients are softened, Ruby tosses them all into the blender with a little water. After a quick “blender dance,” the soup is ready to be put in a bowl! To top it off, Ruby adds fresh basil, nutritional yeast, and a bit of Miyokos vegan cheese. Jane tastes the soup and is amazed by how savory it is! This recipe is also great to make with kids as sous chefs! Just make sure they stay away from the stove and chopping areas! Try making your own “Tomato Tornado” it at home with or without kids with Ruby’s recipe below!

Jane Velez-Mitchell reporting for JaneUnChained News Network.
Photos courtesy of Jane Velez-Mitchell
TOMATO TORNADO
RECIPE: FROM RUBY’S HELP YOURSELF COOKBOOK FOR KIDS
Makes about 4 cups
4 to 6 giant tomatoes
1 onion, chopped big
2 Rapunzel Vegetable Bouillon Cubes with Herbs or Sea Salt
2 cups of water
Spices to taste (ex: Sea salt, Oregano, Basil)
Vegan Cheese (optional)
Put all ingredients in a big pot. Adult Alert! Bring to a boil (big fast bubbles), then stir really well to mix everything up. Turn heat to low and simmer (small, slower bubbles) for 10 to 15 minutes with the pot’s lid tilted. Turn off the heat and let cool. Once the soup is cool, scoop it into a blender. Blend until smooth, adding al little water if it’s too thick. Reheat in the big pot. Top it off with a little extra fresh basil, nutritional yeast, and vegan cheese to make the flavor pop!

March of Silence for Animals Begins in LA!