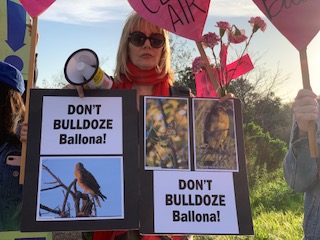 #JaneUnChained #LIVE with a report on the uproar over a plan to bulldoze Ballona Wetlands and call it “restoration.” This is the last real sliver of  wetlands left in Los Angeles county!

200+ species of birds and small mammals live here and would be chased off! As we head toward mass extinction, critics call this plan “wildly irresponsible!” Protesters say this is a scheme to redo gas pipes under the wetlands and disguise it as a restoration! The above video shows, live and unedited, the furious opposition to this plan expressed at a recent Neighborhood Council of Westchester/Playa hearing, which tabled the matter after more than 40 opponents showed up, many with protest signs! First up, Marcia Hanscom of  the Ballona Institute, speaks in detail about why this plan would be an environmental disaster. The plan would allow for about 10 miles of bike paths and hiking trails in the 600 acre reserve, which is supposed to provide a haven for threatened species and which already has hiking paths. A massive parking garage would also be erected nearby, which critics say is primarily sought in order to collect fees. Here are more disturbing details courtesy of the LA Times. Many spoke of witnessing and photographing the many animals thriving in the wetlands now who would be killed if this plan were allowed to go forward!  Protesters also recently held a march and demonstration outside Playa Vista, at the entrance to the Ballona Wetlands Reserve!

Let Governor Newsome and LA Mayor know you are opposed!

Please, also let the Neighborhood Council of Westchester/Playa & Fish and Wildlife know that you don’t want to pave paradise and put up a parking lot! Here is the link to their comment sections. This is extremely important, as the animals cannot speak for themselves! Below that is a sample letter that outlines some of the complaints expressed by opponents during the hearing.

(Use part or all of this letter, but PLEASE add at least one sentence or two of YOUR OWN THOUGHTS TOO! – very important!!!)

Thank you for being concerned about the Ballona Wetlands Ecological Reserve and the plans for this very fragile and important landscape that is relied on my many species of plants, birds and other animals that are part of the Los Angeles coast ecosystems.

From what I’ve read and learned, this state ecological reserve is threatened with massive bulldozing, excavation and construction of an industrial alteration project that would move around more than 2 million cubic yards of life-filled soils.   The disruption of habitat during this 9-year construction project – disruption to the dozens of rare and imperiled species that rely on Ballona for food and shelter – is unacceptable.

This land was saved so the wildlife could be preserved, and so that sensitive public access trails could be opened.   Instead, the plan is for an amusement-type park that would eliminate habitat for many of the rare species that rely on Ballona today.  Wild animals would be killed outright, chased away or caged.

This is not a good use of public money that was meant for protection of wetlands, grasslands and other fragile habitats.

Additionally, releasing carbon that is currently stored in the grasslands, wetlands and willow woodlands at this ecological reserve is the opposite of what is needed as we become more concerned about climate impacts.

We need your leadership, and we ask that you vote to oppose this project and to inform our local, state and federal elected officials of this opposition.

What this land at Ballona needs is maintenance, full-time ranger presence and management.  We don’t need to destroy the Ballona Wetlands to save them.

My family and I want Nature PROTECTED on the Los Angeles coast, not an ill-advised, ecologically-illiterate project that would destroy hundreds of acres of habitat and add to the climate change impacts that are already harming our precious Earth.