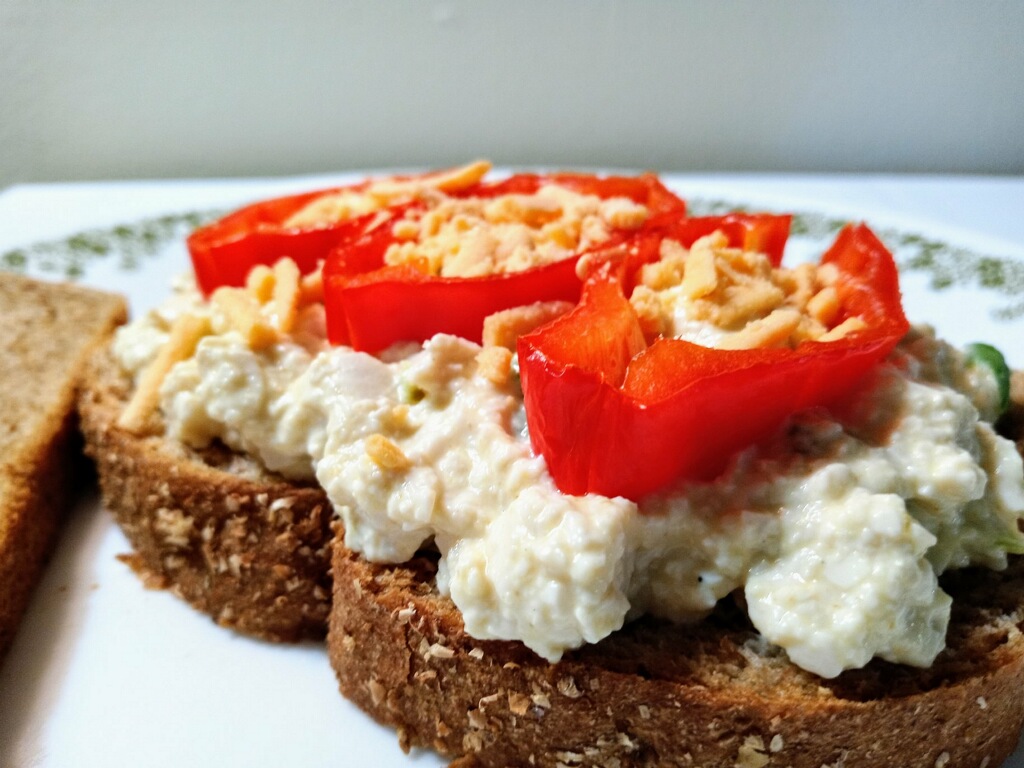 This Easy Vegan Recipe Can Be Made In 5 Minutes!

Learn how to make a delicious eggless “egg” salad sandwich in only 5 minutes! This is an easy vegan recipe you will make over and over again!  It’s a family favorite, veganized!  The tofu and the secret ingredients combine to make a plant-based version of a guilty pleasure. And you can transform this popular sandwich into a vegan superfood delight. We have some superstar vegan guests here to show us how it is done! Leilani Münter famed former racecar driver and actress Stephanie Gerard! Laura Cascada, of DefaultVeg, is doing the cooking. Let’s get started…

Actress, singer, and comedienne Stephanie Gerard was born in Mexico City. Her mother is from Monterrey, Mexico, and her father, from Cannes, France. Stephanie’s parents moved to the small town of Kamloops, British Columbia, Canada when Stephanie was 6 months old. At age 5 Stephanie started singing, playing the piano and the guitar. She lived in Canada for 7 years before returning to Mexico where she lived for six additional years before moving several times. Later on, her parents enrolled her in regular school where she took acting, ballet, and hip hop classes. Stephanie speaks five languages: Spanish, English, French, German, and Italian and has lived in France, Germany, Switzerland, and currently in Los Angeles, California.

Stephanie’s love for music developed as a baby listening to The Beatles. As a child, she sang in the church choir. Singing and performing on big stages became her main focus. Stephanie pursued her musical training in every country she lived in by attending music schools and receiving private lessons. Her training in song includes teachers such as Enrique Del Olmo, Alfredo Algarín, Erick Guecha, and the amazing vocal coach Roger Love in Los Angeles. For piano, guitar, and upright bass training, she attended the Fermatta School in Mexico City and trained with Jorge Guerra, Sadoc García, and Gary Nestruk. Professional training in theater includes working with Virginia Fabregas as well as a year in France at Cours Florent as well as 3 years of Dramatic Arts at the Educational Center of Arts (CEA-Televisa) in Mexico City. She is also trained to do trapeze, aerial silks, and contortion.

While living in Mexico she reached a limit to where her abilities could take her in that country. By that time she had already toured all over Mexico and Latin America, recorded 9 albums including a Beatles tribute where she received congratulations from Sir Paul McCartney.

Television credits include La Madrastra, Derbez en Cuando opposite to Eugenio Derbez. Film credits include Sinverguenzas, Pecado Mortal directed by Alvaro Curiel (Mujeres Asesinas) where she played the lead with singer Julio Reyes, Assassin X (Sony Pictures), In Da Cut (NBC UNIVERSAL), and latest the movie Plan V, (Videocine/No Dancing Today) released in over 1200 theaters in Mexico in August 17th, 2018. She also acted in theater for a season from August 24th till October 14th, 2018 in a play called “Desafecto”, a Nirvana Theater production for Hollywood in Spanish.

Leilani Münter is an environmental activist, documentary filmmaker, biology graduate, and a retired race car driver. Discovery’s Planet Green named her the #1 eco athlete in the world, ELLE Magazine awarded her their Genius Award, and Sports Illustrated named her one of the top ten female race car drivers in the world. In 2007, Leilani began adopting endangered rainforest to offset the carbon footprint of her race car and she protected over 1500 acres of rainforest during her racing career. Leilani is on the board of the Oceanic Preservation Society, the Academy Award-winning filmmakers behind The Cove. She was featured in their Emmy-nominated film Racing Extinction.  Leilani is on the board of the solar non-profit Empowered by Light, a patron of Population Matters and an ambassador for Ric O’Barry’s Dolphin Project. Leilani has been vegan since 2011. She lives in a solar-powered home and her personal car is electric. Leilani’s motto is: never underestimate a vegan hippie chick with a race car.

Laura Lee Cascada has been campaigning for a more just and sustainable planet for over a decade at organizations like Animal Outlook and the Sierra Club. During her career, she has achieved victories like Nestle ditching its cruel dairy ice cream and launching vegan Nesquik, protecting Virginia’s decades-old ban on uranium mining, and stopping more than a dozen “ag-gag” bills that would have criminalized crucial undercover investigations. She’s now the Campaigns Director at the Better Food Foundation, where she leads an innovative food strategy called DefaultVeg–the simple idea of reshaping what we think of as normal to delicious plant-based foods. She has a master’s degree in environmental policy from Johns Hopkins University and published her debut novel, Dellie’s Run, in 2019. In her free time, she also leads a campaign for wild hermit crab freedom called Plight of the Hermies.

This easy vegan recipe is definitely comfort food you will want to whip up over and over again.  It is so easy to make, with only a few ingredients.  It’s the perfect vegan egg salad sandwich that will bring back all your childhood memories.  Egg salad sandwiches were a staple lunch for many growing up, myself included, and now we can have a far healthier and tastier vegan version.  The secret ingredient, black salt, makes it taste just like eggs.  Let’s take a look. 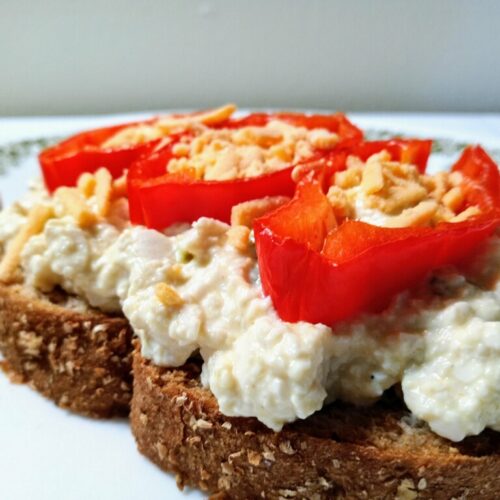 Thank You For Joining Us For This Easy Vegan Recipe!

This was such a fun episode with three amazing young women doing so much to promote veganism and a more compassionate world.  I hope you enjoyed learning how to make this incredibly easy vegan recipe which took only a few minutes to put together.  Egg Salad is a great go-to lunch, and now you can have it vegan.  You will never know the difference because the tofu gives you the egg texture and the black salt gives you the egg-ey flavor.  So give it a try and let us know how you liked it!  And for more delicious vegan recipes, stop by the #LunchBreakLIVE page.  We have so many to choose from.  Until next time…keep cookin’!