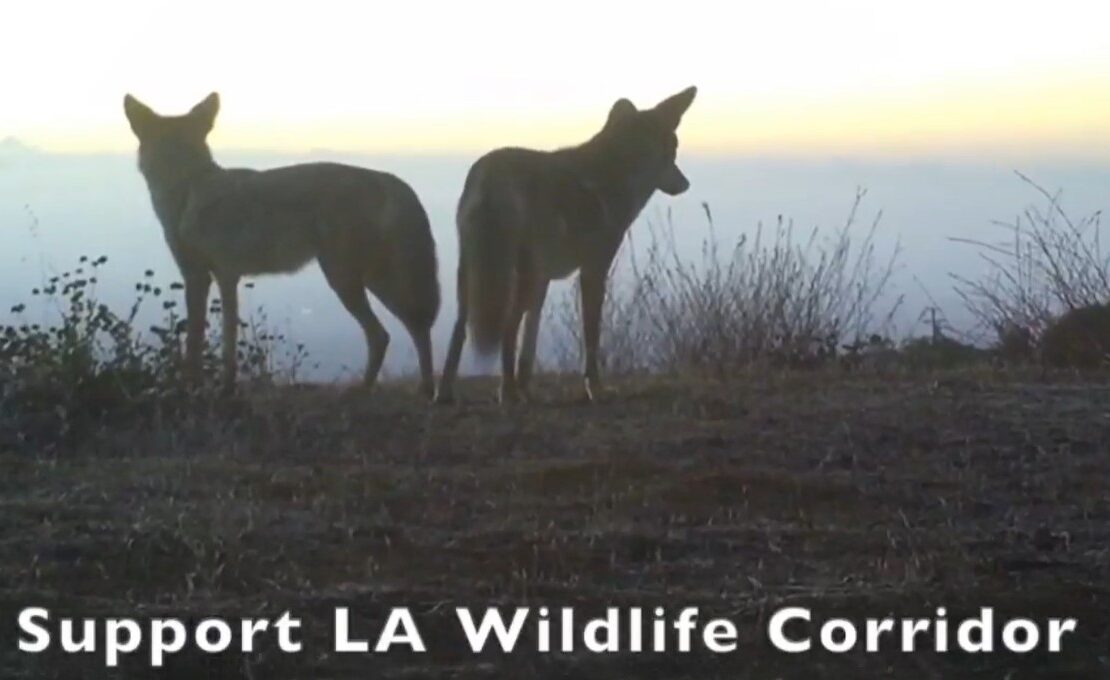 Think about all the wild animals grappling with extreme heat, drought, wildfires…and the destruction of their land for cattle ranching, factory farms or infrastructure. There is a way to help them. Across the United States, politicians are debating wildlife corridors to help wild animals naturally move from one area to another. They need them to avoid starvation, over-predation, natural disasters (such as fires and floods) and even local extinction.

Legislative proposals to create these corridors have been circulating, with different degrees of success, in the House of Representatives, in the US Senate, and in cities like Los Angeles, California.

Wildlife corridors are an essential tool to correct the harm we are doing to planet Earth. We must phase out animal agriculture and transition to regenerative veganic farming. We also need to rewild a lot of the land we took from nature. As we foster animal habitats, thick with greenery, those trees absorb carbon, which ideally would help reduce the earth’s temperature. Wildlife Corridors are a crucial part of this rewilding strategy. This is what we must do to help struggling wild animals survive, stem habitat loss and stop the looming climate catastrophe.

What Are Wildlife Corridors?

JaneUnChained.com‘s Jane Velez-Mitchell had a conversation with Kate Wall, Senior Legislative Manager at IFAW (International Fund for Animal Welfare). They have been championing the idea of entrenching wildlife corridors in federal legislation. She explains what they are:

“These are ways for wild animals to get from one place to another. It’s not enough to have just protected areas. Because, like us, we may be protected in our homes. But if we can’t get from our homes to the grocery store, to water, or to other people, we’re not going to survive past one generation. The same with animals.”

“If you don’t have corridors to connect animal species you essentially only have little islands of protected areas all over the place.”

“There has to be a way for animals to move and find genetically diverse mates or the species themselves are just going to go extinct in these small island populations.”

IFAW is behind the Wildlife Corridors Conservation Act, aimed at funding all types of wildlife corridors in the United States. The U.S. House of Representatives approved it in July 2021, but the U.S. Senate did not, when they had their chance. Kate explains:

“One of the beauties of the Wildlife Corridors Conservation Act, the piece of legislation that was folded into the house infrastructure bill, the INVEST Act, is that it sets up a framework to incorporate different types of land by providing resources to municipalities, states, and volunteer individuals for corridors to cross their land.”

“It’s a system where people can work together to create a patchwork of wildlife corridors, which run over all types of land. It’s a brilliant way to include all of us.”– Kate Wall, Senior Legislative Manager, at IFAW

Recently, U.S. Senators had the opportunity to incorporate this new bill into the new Infrastructure Investment and Jobs Act. Unfortunately, on August 11th, 2021, they passed it without doing so. Instead, it only added wildlife crossings. Kate explains the difference:

“Corridors themselves are the whole route an animal would take from one protected area to another. When I say protected area, I don’t necessarily mean a national park. But really from one area where there is enough habitat to survive to another. So, corridors are like the streets, the bridges, the underpasses, the overpasses and habitats. If you are thinking of pollinators, these are the areas where there are enough plants for them to stop on their trips.”

“Crossings are some of the structures that go into that. Crossings are these wildlife overpasses that we see all over the world. We see some in Utah, in Alaska, in California, or Wyoming. They can be overpasses over highways, or underpasses under roads. They can have water incorporated into them.”

Why is it that the senators voted only for crossings? It’s all about the money. Apparently, the senators were mostly focused on preventing expensive car accidents as opposed to preventing species extinction.

“It cost the United States $8 billion every year to deal with wildlife-vehicle collisions.  And that 8 billion number has caught the eye of a lot of people on both sides of the aisle in Congress. So, we have seen a real recognition of the need for wildlife crossings. Now we kind of need to expand that out. And some people on both sides of the aisle do recognize that corridors are also important. We need that understanding to be accepted as well.”

In July the State of California also secured funding of $61 million to build wildlife crossings.

The Los Angeles City Council Has a Wildlife Corridors Project

One of the politicians who certainly understands the need for wildlife corridors is the popular L.A. City Councilmember Paul Koretz. He has a brilliant plan to create corridors around the city so animals can move around and do not end up fenced in. Click here to watch the YouTube video on the issue. This ordinance will help ensure the survival of amazing wildlife, animals that CLAW (Citizens for Los Angeles Wildlife) often record with strategically located static cameras.

Jane Velez-Mitchell had a conversation with Councilmember Koretz, who said:

“Most people think that L.A. is a concrete city of freeways, but they don’t know that we have a majestic mountain range through the backbone of our city, from Griffith Park to the ocean. We have deer, hogs, bobcats, foxes, rabbits, coyotes, and even mountain lions.”

“We believe that we have an enormous responsibility to protect them. And we realize that with all the buildings in the hillsides we started to cut off their roots to connect with each other — which are wildlife corridors. And without that ability they begin to inbreed — they are already inbred — and eventually, they will become extinct. We are working to maintain the wildlife corridors that remain. So they can continue to connect in the Santa Monica mountains.”

“There is great urgency. We needed to do this five or six years ago when we began the effort. But still is not too late. We absolutely can save our wildlife if we put these corridors in now.” –Paul Koretz, LA City Councilmember.

It’s a Win-win for Everyone

Creating wildlife corridors helps animals, ecosystems and biodiversity.  Councilmember Koretz explains why creating them is not that difficult, and everyone wins with them:

“This will not stop all development. It just guarantees that, when you look at building a home, you can’t take the whole property. You’ve got to take a section and make sure that there is a place for wildlife to traverse that area. So, you can’t fence it off entirely. You can’t develop it entirely. You’ve got to have a section where they can travel. That’s not got much of a sacrifice. It’s not that hard to plan a single-family home in the hillside allowing some space for that.”

The project still needs funding and the full commitment of L.A. Mayor Eric Garcetti. Councilmember Koretz is asking for support:

“L.A. Citizens can call the City Council and encourage them to fully fund the wildlife corridors project. There is a lot more to do.” –Paul Koretz, LA City Councilmember.

Supporters urge citizens to demand that Mayor Garcetti accelerate the process and provide the funding to make these corridors a reality. Reach out at:

Email OurLA2040@LACity.org to get involved.