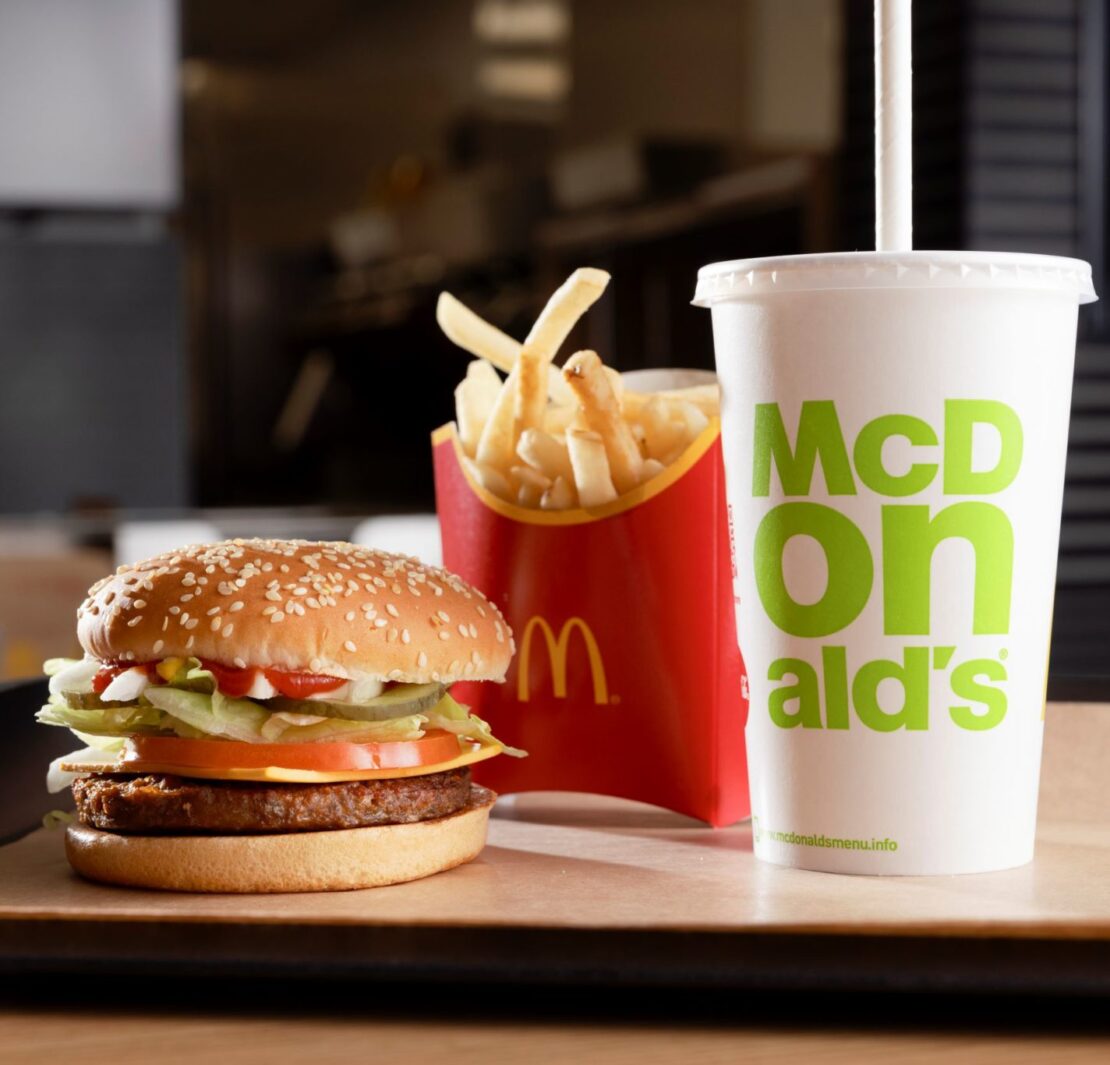 The fast-food company has announced the launch of its McPlant burger…. in the United Kingdom.

McDonald’s says it had to get all the components just right to create its first vegan burger. The company test-marketed the McPlant in Denmark and Sweden and the story of its development has more plot twists than Hamlet.  And, to quote Hamlet, it all boiled down to executives at the meat/dairy-laden giant asking themselves of the vegan alternative: To Be or Not to Be?

But, all’s well that ends well… and this drama’s final act is the birth of a truly happy meal because it’s meatless, dairy-free, and 100% vegan!  Finally!

The firm says it experimented with hundreds of vegan cheese brands from across the world.  But, it just wasn’t satisfied with any of them. Therefore, the company created its own vegan cheese.

McDonald’s got together with Irish food company Kerry. The resulting vegan cheese is made with pea protein. This is said to have the same flavor and texture as dairy cheese. We shall see when we get the chance to taste test it!  The burger will become available in over 250 UK McDonald’s restaurants starting in October.  The McPlant will cost £3.49 or about $4.80 U.S.

Kerry is also the company behind the brand Richmond. They are known for their fantastic vegan sausages and alt-meat brand Taste & Glory.

The McPlant also uses a Beyond Meat® patty. That’s something that will delight many vegans. Beyond Meat® is seen as one of the best meat substitutes available.  This makes the arrival of the McPlant burger even more amazing.

“We’re so pleased to be finally launching McPlant in the UK and Ireland. We take our time to ensure it meets the highest standards.

“We are always looking for different ways to innovate and meet our customers’ needs. And, with McPlant, we have a delicious plant-based burger that will appeal to everyone. Whether you’re vegan or just fancy a plant-based patty, we’re confident you will enjoy the McPlant.”

Vegan Chef On A Vegan Burger

Welsh celebrity Matthew Pritchard is the face of the UK advertising campaign. He is the star of Dirty Sanchez, a professional skateboarder, and a celebrity vegan chef with his own hit show on the BBC called… Dirty Vegan.  And he described the vegan cheese as “absolutely delicious.”

And, vegan activists, before you work yourself up into a plant-based frappé, please know that McDonald’s says it will cook the McPlant separately from non-vegan items on the menu. Workers will also use dedicated utensils. The McPlant contains 429 calories.

What About The USA?

The fast-food giant’s UK branch has said it plans to roll out its vegan burger across England in 2022. But when will it come to the US? Even McDonald’s fries are yet to become vegan Stateside!

New York Times bestselling author Kathy Freston has been demanding a McDonald’s vegan burger in America for years. When it happens, the author of 72 Reasons to Be Vegan will have 73 reasons.  Freston has a Change.Org petition begging McDonald’s to just do it. It’s got a quarter of a million signatures and you can sign here. Come on already McD! Pretty please!

Bottom line. McDonald’s has made a quantum leap with the McPlant. We applaud the iconic fast-food brand for this breakthrough product.

In the meantime, there’s also the option to make your own vegan burger. You could try one of the delicious recipes featured on JaneUnchained.