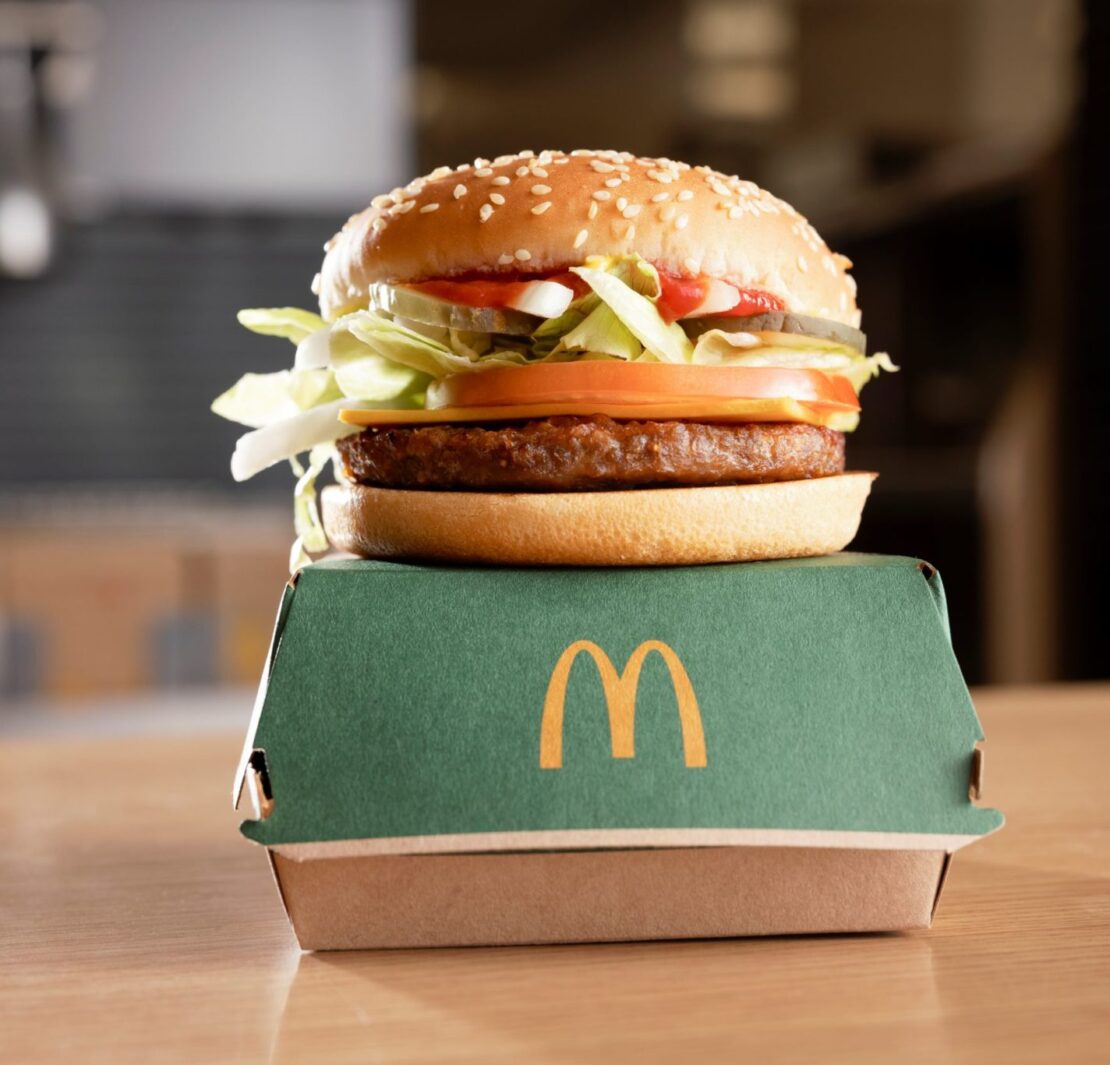 Vegans and pre-vegans alike have been Mcloving the McPlant burger in the United Kingdom. Well, now, it’s IN America. FINALLY! The vegan patty is only available in 8 locations so far. But, if we all go out and get it at those 8 locations, and make it a successful test, that increases the likelihood that it will go nationwide!!! So, get out there and buy it!

WE WENT AND ATE THE McPLANT IN EL SEGUNDO!

UnChained’s intrepid team of taste testers went to the McDonald’s in El Segundo, near LAX, to taste it for ourselves! And, of course, went LIVE! Check it out. Jane Velez-Mitchell and Kim Delgado storm the McD’s!

Warning: Vegans Will Have to Say, “hold the cheese and mayo.”

Those accoutrements are not vegan at this point. And, it’s cooked on a shared grill where meat is also cooked. And, again, it’s just being tested in only EIGHT American McDonald’s. However, it’s still huge news. It opens the door to the world’s most iconic fast-food brand selling a meatless product across the world’s most voracious fast-food nation.

Where You Should Go to Order the McPlant!

The McPlant burger will initially be tested in McDonald’s in:

We urge everyone who loves animals to buy this product. Just say “hold the mayo, hold the cheese.” If the shared grill bothers you, give the burger away to someone who is hungry. Obviously, if it is successful, that increases the chances that it will be expanded to a permanent menu item across the US soon! If that happens, it could save billions of cows and help our movement hit the vegan tipping point.

To put it in context, it was way back in the summer of 2019 that rival Burger King launched its vegan patty, the Impossible Whopper, in the United States. McDonald’s has been much more cautious and seems almost obsessed with testing and retesting the vegan patty option. In late 2019/early 2020, McDonald’s tested what was then being dubbed the P.L.T. in some McDonald’s in Canada.

Then, in early October of 2021,  the McPlant launched in the UK.  Social media lit up with positive reviews of the long-awaited plant-based burger. UK-based Joanna Hughes commented: “The patty was… amazing. I forgot how much I love pickles in a burger. I can’t wait until it’s rolled out nationwide… absolutely delicious.” The Independent news site also welcomed the UK rollout.

It doesn’t seem like five minutes since JaneUnchained ran my article on the UK McPlant launch. We called for a US launch in that very article.  Now, the wait is over.  American mainstream news media outlets gave the announcement the kind of coverage every vegan activist dreams about. Bloomberg, the New York Post and even CNN couldn’t wait to break the news.

Not Aimed At Vegans But at Mainstream Consumers

When the McPlant burger hits US shores on November 3rd, 2021, it will be released in a limited number of US McDonald’s branches. Clearly, the target consumer does not seem to be vegans, but rather people who may be interested in scaling back their meat consumption, so-called flexitarians as well as vegetarians. Why do we conclude that?

Veg News reports: “The McPlant burger features a plant-based patty made from peas, potatoes, and rice that comes topped with tomato, lettuce, pickles, onions, mayonnaise, ketchup, mustard, and a slice of American cheese. Both the mayonnaise and cheese are not vegan and the burger’s patty is cooked on a shared surface with animal products.”

A partnership between McDonald’s and Irish food group Kerry has reportedly resulted in the perfect vegan cheese slice. So, why isn’t the American McPlant burger made with a vegan cheese topping? We don’t know. We welcome McDonald’s to come on any time to discuss.

But, it’s still a huge step forward. Clearly, this is a process, not a singular event. Whatever moves the needle toward reducing animal suffering, improving human health, and reducing climate change is progress. That being said, more progress can be encouraged.

Plant Based News asked the question on all vegans’ lips: Why isn’t it 100% vegan?  To be clear, the patty is 100% vegan and it’s easy to say “hold the mayo and hold the cheese please.” The shared grill issue is trickier. Some vegans will be bothered.  Some may not. We hope these glitches will be ironed out soon.

The very fact that the McPlant burger has come to America is a step in the right direction. Each small step helps to reduce meat consumption and climate change. The arrival of the McPlant in the US is reason enough to rejoice.

That’s a huge number. I’m sure that number has grown too. So, it would make sense for McDonald’s to tap into that market. The money of almost 10 million vegan Americans is there for the taking. A few easy tweaks and the McPlant could be 100% plant-based in every respect.

Bottom line. Vegans have a victory to celebrate. We hope more vegan items will be added to the menu soon. In the meantime, we hope that everyone supports this product. Go out and get it, even if you give it away.