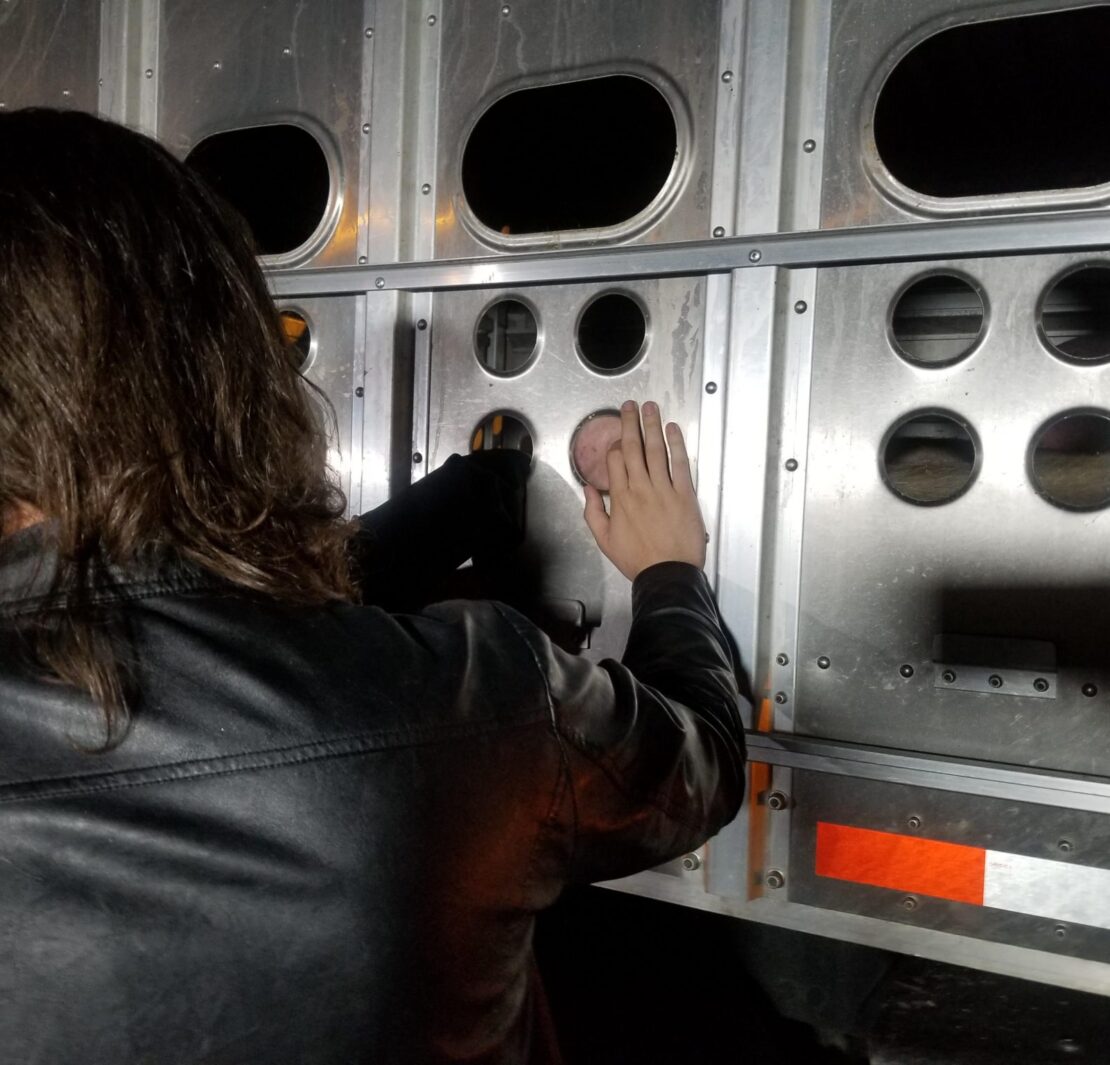 Don’t look away… The Save Movement’s co-founder Anita Kranjc, is making a documentary tentatively named “Bear Witness” that is about activism at the places where animals are hurt and killed. You may wonder what it means to bear witness. And Amy Jean Davis, the organizer for the Los Angeles Animal Save group, says it best… Bearing witness means “when you see something unjust and horrible happening to a fellow being, you don’t look away, you come closer, as close as you can and you try to comfort them.” You share their story and what is happening to them with everyone you can. The Save Movement popularized this form of activism where activists visit slaughterhouses or places associated with animal cruelty and they look, document, and get as close as they can to possibly provide comfort for the creatures effected.

The Save Movement started in 2010 when Anita co-founded Toronto Pig Save. In 2015 she was arrested and charged with criminal mischief for giving water to pigs outside of a slaughterhouse in Burlington. She was arrested and faced years of imprisonment for this act of kindness toward animals that could never thank or repay her mercy and would soon meet their fate inside of that slaughterhouse. Through systematic pig vigils, which are events that allow activists to see the pigs as they enter the slaughterhouse, they were able to disrupt business (raise awareness) and that slaughterhouse eventually shut down. In 2017, her case was dismissed and she was acquitted of all charges associated with her arrest. Anita will be the first to say that she was not the first person to do vigils or give pigs water but her case paved the way for a movement against animal cruelty worldwide: The Save Movement.

The Save Movement is also unique in that it is love-based. Activists show drivers peace signs and try to make progress through peaceful means. There is no cursing or aggression involved just quiet, peaceful, loving energy is brought by the activists outside of these sad places. The concept is to be there for the victims and invite others to see with their own eyes, in person, the conditions these animals endure in order to become a product on the store shelf.

Anita spent several days in Los Angeles filming at the Animal Rights National Conference held by F.A.R.M., and attended several vigils and activist events. She attended five pig vigils organized by LA Animal Save and Animal Alliance Network and filmed the conditions the pigs arrived in. She inspired activists to do more, and increase their efforts in the area in hopes that one day soon the slaughter will end. She also captured the raw emotion, thoughts, and hope of the activists as they experienced the vigils. Jane Velez-Mitchell was right by her side for most of the filming and added her experience, helping direct and produce the documentary. We encourage everyone who can to watch this film, tentatively scheduled for release in 2019, to please watch it and share it with everyone you can. These animals deserve to be remembered and people need to see what they experience and know that they will make the ultimate sacrifice, unwillingly, to end up on someone’s plate. So watch it and don’t look away… Come closer and get involved if you can!

“When the suffering of another creature causes you to feel pain, do not submit to the initial desire to flee from the suffering one, but on the contrary, come closer, as close as you can to him who suffers, and try to help him.” – Leo Tolstoy

Please help by getting involved with your nearest Save Movement group, fund efforts to increase awareness, as well as get more information by visiting The Save Movement website here.

Written by Ellen Dent, co-organizer of The Animal Alliance Network

Plant Based Drippin Raps For A Vegan World!