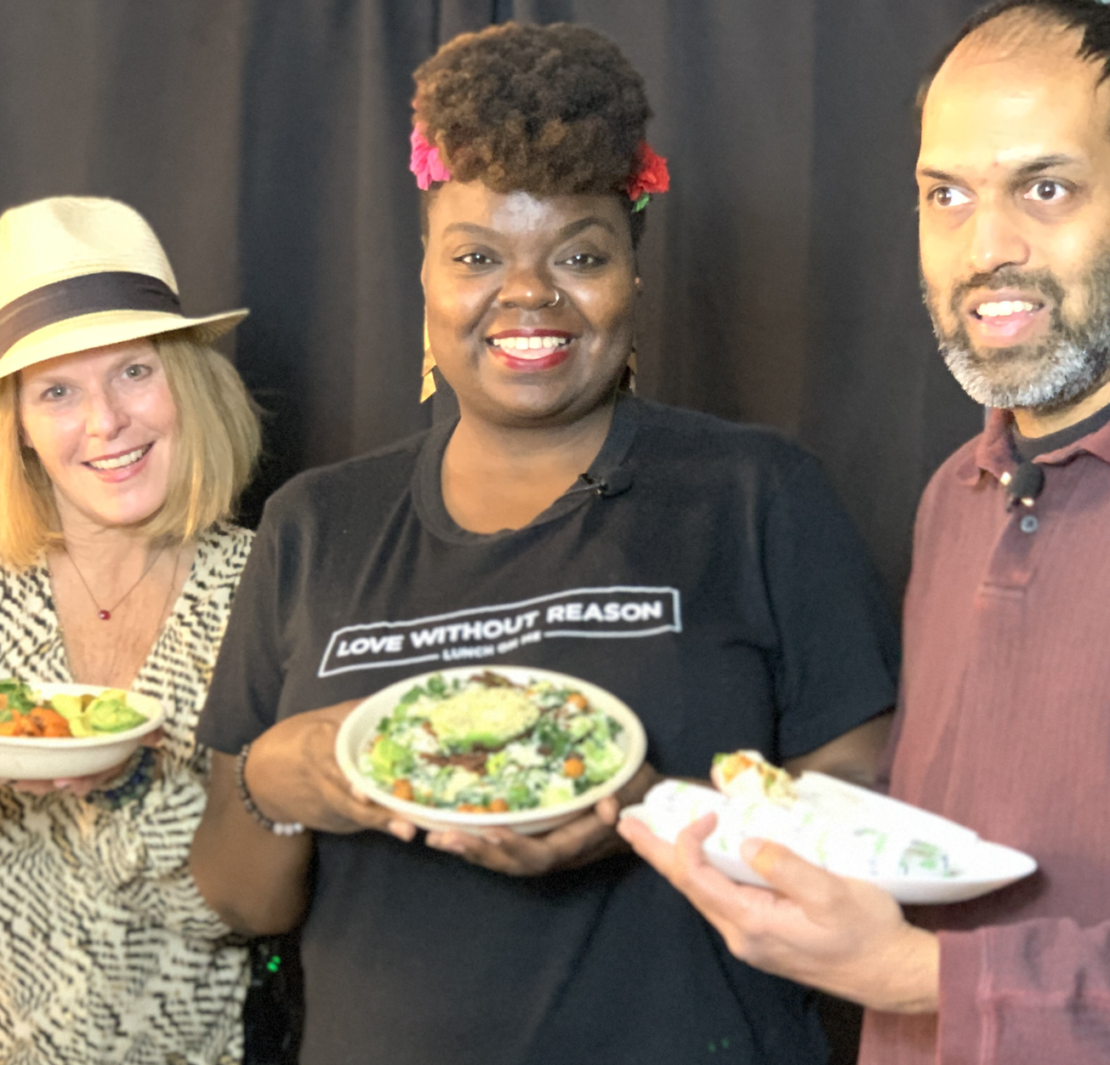 #LunchBreakLIVE gets super high tech with its first-ever 3 camera LIVE show at Real Change Events studio in beautiful, downtown Burbank, CA.  The team grubs on lunch from Veggie Grill, who is one of the sponsors of the Real Change Events space.  Real Change highlights celebrities, social media stars, entrepreneurs and heads of nonprofits through interviews, panels, and in-depth conversations, discussing the causes they are passionate about. A special shout out to our media consultant, Dave Coennen for setting up this special #LunchBreakLIVE.

We had the pleasure of having lunch with our dear friend and producer Prabhat Gautam on this episode of #LunchBreakLIVE.

Prabhat Gautam is the founder of Real Change Events.  His strong desire to be involved in issues such as world hunger, homelessness, finding cures for diseases, promoting organ, tissue, and bone marrow donation, and building orphanages and hospitals in under-developed countries, has propelled him to produce hundreds of events over the past 20 years. In his college days, he spent much of his time volunteering with a local community television station and produced and hosted programs that worked to raise awareness about issues that matter to young adults.

Prabhat has since continued his commitment to social justice with his work with the Center for the Advancement of Nonviolence, Doctors Without Borders, Muscular Dystrophy Association, American Heart Association, Elizabeth Glaser Pediatric AIDS Foundation, Entertainment Industry Foundation, Liberty Hill Foundation, Giving Back Fund, Salvation Army, Project Angel Food, ACLU, Amnesty International, Human Rights Watch, AmeriCorps, Dream Center, PETA, Humane Society of the United States, Make-A-Wish Foundation, and Children’s Wish Foundation. When asked about his volunteerism, he says, “Each experience has been rewarding, but I know I need to do so much more.” His mission in life is to create projects that will highlight the good that is going on in the world, with the hope that more people will get involved in making even greater good happen.

He has believed in volunteering his time and working to promote charities since he was a young kid in Oklahoma. In 1993, his father died of a heart attack at the age of 49. He was only 16 years old and this loss took him on a journey, figuring out ways to eliminate preventable death.  In 2001, Prabhat was given the honor of donating bone marrow to a 16-year-old girl named Anka, who had acute Myelogenous Leukemia.  Sadly, she would die one year later.  Her life and death would become the focus of Prabhat’s life’s work.  Two months after the loss of Anka, he experienced another loss with the death of Rachel, an 18-year-old girl, whose “wish” he worked diligently on as a Make-A-Wish Foundation volunteer.  These two major losses still motivate him to work towards finding a cure for cancer and all other causes of premature death.

We also had the company of Gwenna Hunter, founder of Vegans Of LA, and fellow animal advocate. In 2016, Gwenna went from vegetarian to vegan after watching the YouTube video “Dairy is Scary.”  She enjoys bringing people together for social functions designed to create networking, mingling, dating and a safe, fun space for non-vegans to experience new and delicious foods, while learning that it’s unnecessary to eat animals. Vegans Of LA celebrates Urban Vegan Pop Culture, showing those who are vegan-curious how fun and easy veganism is, while also demonstrating that animals are conscious sentient beings. Veganism isn’t just a diet. It’s a lifestyle. Take this journey with Vegans Of LA as they explore veganism throughout the beautiful city of Los Angeles and the rest of the world.  If you want to get more involved, check out Vegans Of LA.

In addition, Paige Parsons Roache joins on this episode. Celebrating being vegan for 4.5 years now, Paige is committed to bringing ECO-VEGANISM to the forefront of every interaction: Environmentally conscious vegan living. After watching the documentary COWSPIRACY, she went vegan on the spot. Her daughter Katelyn, 13 at the time of choosing veganism for the animals, brought Paige to this new level of awareness. After being shocked by the amount of water it takes to put a hamburger on a plate and the fact that animal agriculture is the leading cause of deforestation and climate change, Paige chose to go vegan “for the environment.” Soon after, she attended her first pig vigil with LA Animal Save. Once she looked at those baby pigs in the eyes, she knew why her daughter had gone vegan.  In 2017, cooking as a guest chef on #LunchBreakLIVE after meeting Jane Velez-Mitchell at VegFestLA, and inspired by Jane’s bold courage, Paige became a Contributor for JaneUnchained News. Reporting on all the latest animal rights’ aspects, including The Save Movement’s pig/chicken/cow vigils, various PETA protests, VegFests, book launches, Anonymous for the Voiceless’ Cube of Truths and vegan conferences, Paige is the main Booker for #LunchBreakLIVE, the daily plant-based cooking show and speaks globally on behalf of JaneUnChained News Network.

Skip The Restaurant and Make Vegan Gyros at Home!