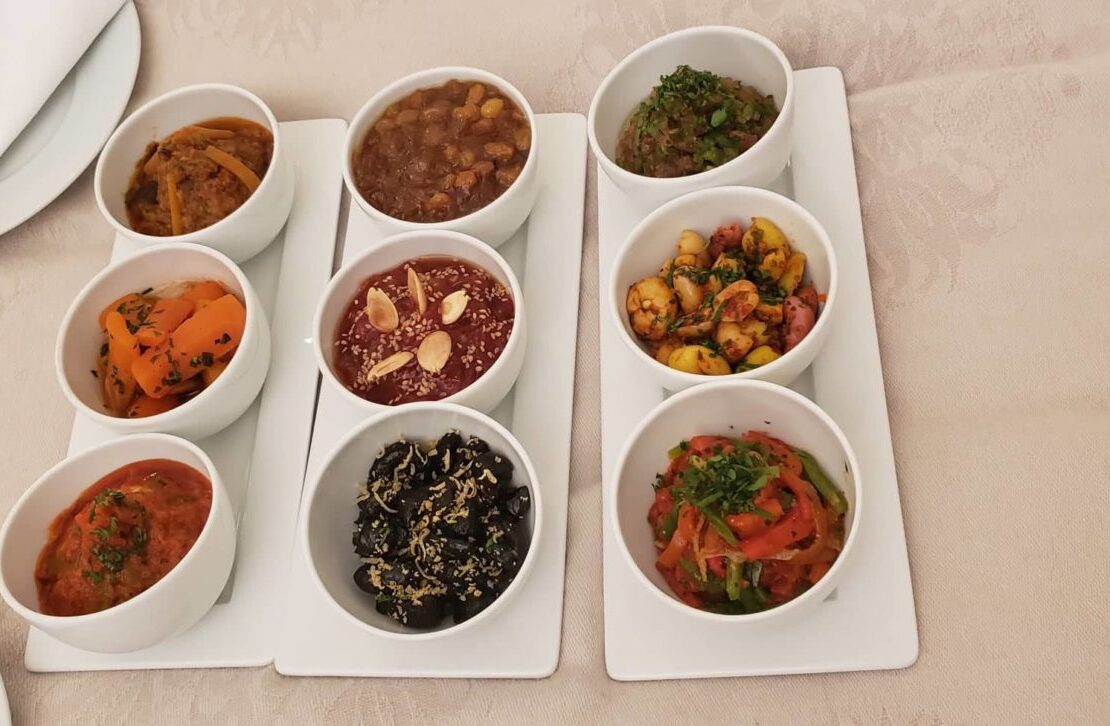 A Vegan Tour In Marrakech

On the site of the set for The Man Who Knew Too Much, we’re at the La Mamounia Hotel in Marrakech, in the Kingdom of Morocco! Join host Vanessa Marsot, founder of Ellora Wellness Global on this episode of #LunchBreakLIVE for a sampling of vegan dishes from the gorgeous balcony of her hotel. This was Winston Churchill’s favorite hotel built in the 1920s, which regularly welcomes the Clintons and other celebrities, but who knew it made such amazing vegan dishes? Moroccan cuisine naturally has many vegan dishes, from all its vegetable tagines and couscous to salads, hummus, and falafels. This restaurant is no exception.

La Mamounia goes a step further and has a garden full of produce it grows for its kitchen. It has a medley of vegetables and herbs that it grows to use in its world-class cuisine.

Who Is This Traveling Vegan Who Landed In Marrakech?

Vanessa Marsot is living her dream, filming the #VeganWorldTour, starting in Marrakech, Morocco, to show what’s going on in terms of veganism and animal issues throughout the world and spreading the news as a #vegangelist of the #Vegonomy. She’s also working on the Vegan Pole Dance Cookbook, soon to be published. As a Yale graduate, actress, model, writer, poet, yoga and pole dance instructor, personal trainer, and licensed psychotherapist, her mission is to stop animal suffering. Vanessa founded Ellora Wellness, a global vegan organic wellness center and one-stop-shop for creative, cruelty-free living.  Ellora offers vegan, organic, ecological, non-toxic, and sustainable foods, products, and services. Ellora has dance, yoga, and fitness classes, healing arts, Sunday brunches, a boutique of clothes, jewelry, and decorative arts, and a grocery store of no plastic, zero-waste bulk products. These are the 4 pillars of health as she sees them—what you put in and on your body, the need for movement and creative expression, and the need for healing assistance every now and then. She is also currently working on a book form of Ellora, how to lead an eco vegan life. She welcomes everyone into Ellora as family members in a community.

The Vegan Food From Marrakech

Vanessa and her new friend she met in Marrakech, Philippe, started with a mixture of Moroccan sides and salads. There was a Tfaya, a caramelized onion dish with chickpeas and cinnamon mixed in, sweet carrots in a cumin sauce, grilled leeks in a dill vinaigrette, pureed aubergine with a tomato paste sauce, grilled peppers with parsley, olives (which Vanessa refused to sample, as she is an avowed olive avoider), and chakchouka, a mixture of tomatoes, peppers, onions, and spices. A veritable feast with no cruelty! And this was all prepared by master chef Yoann, who made a reputation for haute cuisine in France. It just proves once again how easy it is to eat vegan wherever you are, and that the top levels of cuisine already have many vegan options available.

Thanks for joining in on this episode of #LunchBreakLIVE with Vanessa’s vegan world tour stop in Marrakech.  It was so fun and insightful to see the beautiful vegan food served to her and Philippe on the other side of the world.  It is such a joy to travel around the world, finding all the magical vegan spots available, serving up delicious cruelty-free plant-based meals.  Check out more recipes from around the world on the #LunchBreakLIVE page.  Until next time…keep cookin’!