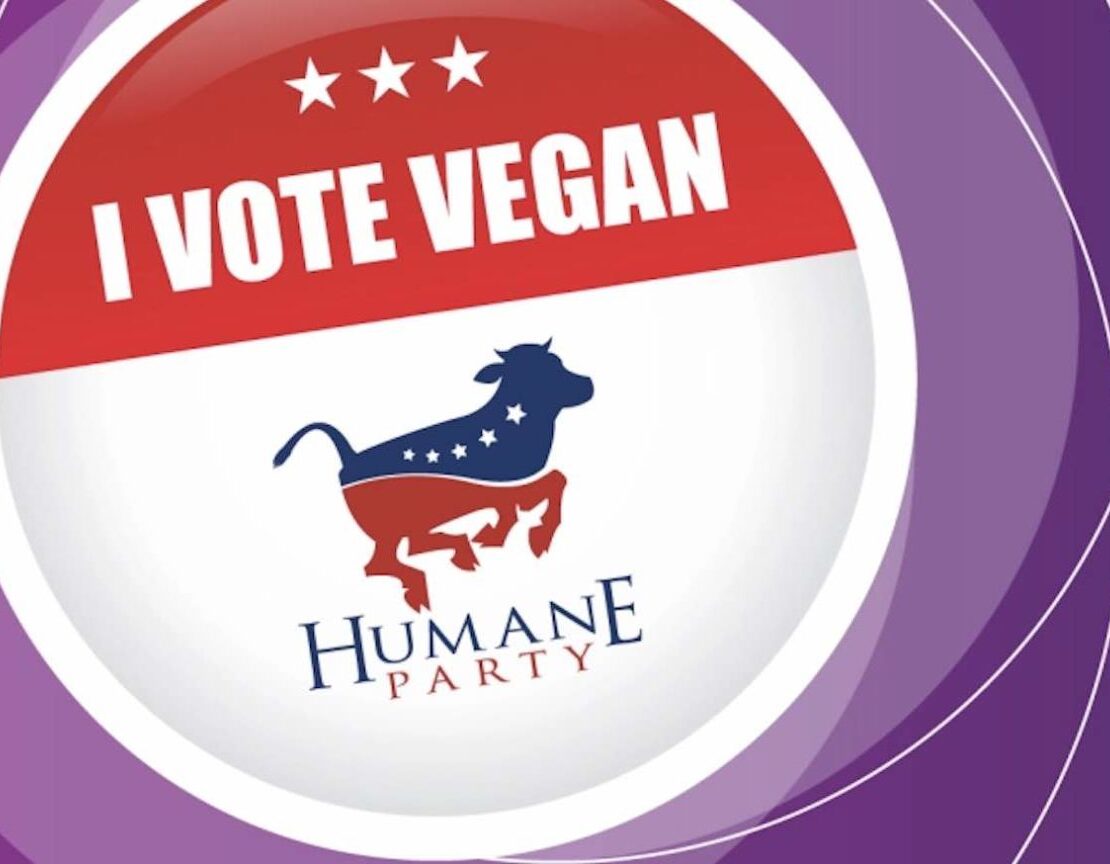 The Humane Party: The U.S. Political Party with a Vegan Agenda

Political parties rise up when enough people have a common interest they feel is being ignored by the mainstream political machine. This happened in 1892, when America’s disgruntled farmers created the People’s or Populist Party, wrote a platform, and nominated candidates for national political office. Traditionally, third parties have not met with a lot of success in the United States… to put it mildly.  But, they still have a purpose: raising the profile of important issues being ignored by the powers that be.

In 2009, the Humane Party first appeared in Los Angeles, rising from the ashes of the Liberty Party (1840-48). It made its first public appearance in 2011 during the huge LA vegan festival called WorldFest, now known as VegFestLA.  The Humane Party also participated in the Animal Rights National Conference held in L.A. Andrew Kirschner was its first candidate for the U.S. House of Representatives for Florida.  In 2016, the Humane Party ran its first candidate and ticket for U.S. President/Vice President. The candidates were Clifton Roberts for President and Amie Breeze Harper for Vice President. Click here to watch JaneUnChained’s Jane Velez-Mitchell interview Roberts at a campaign kick-off event in 2015.

“I am a voice of the Humane Party, a party that offers you, me, our non-human animal friends, and citizens—that are naive or unaware of the issues it addresses and the solutions it offers—an inspired and refreshing platform … A platform to live by, and a platform that I would surely die for.” Clifton Roberts, 2016 Humane Party Presidential Candidate

The Vegan Humane Party Operates in a Difficult Political Environment

The Humane Party may have gotten some inspiration from what’s been happening in Europe, particularly the creation of the Danish Vegan Party (Veganerpartiet) in 2018. It is the first official vegan party that is considered to have a chance of actually winning some elections soon.

However, compared with Europe, and in particular Scandinavia, the U.S. political arena is particularly hostile to ultra-progressive minority parties. You can only imagine how the idea of a vegan political party would sound to morally bankrupt beltway hacks who pal around with Big Ag and Big Pharma lobbyists. Shel Harrison, one of the Humane Party’s volunteers since its creation, told me about the main challenge for this party:

“Here in the U.S., the Democrat-Republican bloc has enjoyed uninterrupted and basically unchallenged dominance for more than 150 years. This bloc has been in control of the White House, both houses of the U.S. Congress, and virtually all state legislatures for that entire time. You’d have to go all the way back to the days of Millard Fillmore, the last Whig President (1850-53), to find a significant alternative to Democrat-Republican hegemony. And many Americans today cannot even fathom the possibility of such an alternative.”

The Humane Party does not have any paid employees, only volunteers. Shel describes a typical member of the team:

“Not only had to take the step of rejecting animal exploitation but also that of dethroning the meat-and-dairy party bloc… It’s a rare and inspiring individual indeed who has that kind of courage, confidence, and conviction.”

Challenging The Hegemony of Carnism

Shel believes there is more going on in the US political landscape: “The Democratic-Republican bloc keeps the animal-killing ‘industries’—meat, dairy, eggs, leather, vivisection, and the rest—legal in all 50 states. And, indeed, props up these ‘industries’ with millions of dollars in taxpayer-funded subsidies every year. And with special legal protections that virtually no legitimate business enjoys, such as the Animal Enterprise Terrorism Act, which characterizes animal-killers as the victims and people who try to stop the killing as the terrorists.  Such bizarre, Orwellian legislation—and distortion of the language itself—is the inevitable result of the single-bloc rule.”

What Shel is describing is a manifestation of Carnism. The Psychologist Melanie Joy first coined this term in her 2009 book Why We Love Dogs, Eat Pigs, and Wear Cows. It gives a name to the prevailing ideology which conditions people to uncritically accept the consumption of certain animals. This flawed belief system is so widespread that most people consider its principles common sense. One of the manifestations of such ideology is its intrusion into the main political parties. These parties do not even think twice about developing policies to perpetuate animal agriculture in general and factory farming in particular, even though the negative repercussions in the form of habitat destruction, wildlife extinction and climate change now pose an existential threat to all of humanity.

President Biden put in Tom Vilsack, who was the CEO of the U.S. Dairy Export Council, to head the Department of Agriculture. Vilsack also served as USDA secretary under President Obama. Vilsack is known as a beef advocate who defended the controversial beef carcass trimming product known in the media as  “pink slime.” He has also publicly downplayed the impact of animal agriculture on the environment. With democrats vowing to seriously address climate change, how can they not see that they have essentially put the meat/dairy industry in charge of our agricultural policies? This is an example of carnism at work in politics.

As Melanie Joy states on her website, in essence, Carnism is the opposite of veganism. Therefore, a party that advocates for veganism is going to face a very uphill landscape with many deeply ingrained prejudices to overcome. And a political system that does not give many chances to new ideologies does not help. The current increase in the popularity of veganism amongst consumers may not be enough to get Humane Party candidates elected any time soon.

An Unusual Name for What Essentially Is a Vegan Party

For many ethical vegans like myself, the term humane has some questionable connotations. We hear it when carnists justify the killing of animals by saying they were humanely killed. Or when flexitarians claim they do not need to go vegan as they choose the most “humane” sources of animal products. We associate it with animal welfare organizations that do not advocate for veganism.

It seems that there was quite a debate at the party when they had to choose a name. Before launching on April 22, 2009, the party had three alternative names:  the Vegan Party, the Abolition Party, and the Humane Party.  They eventually chose the latter (creating their own definition of humane). However, they still consider the other two names of value. In the party’s publication The Humane Herald, they state:

“These names accurately highlight certain essential features of the Humane Party that may not be readily apparent to someone who does not know what the word ‘humane’ means.  For instance, the Humane Party Oath requires that all candidates, officers, and board members be vegan personally and abolitionist politically.  That’s why at least some Humane Party supporters have, to this day, continued to refer to it by one of these alternate names.”

A Unique Oath That Only the Vegan Humane Party Has

This publication, being part of a non-profit, does not endorse any political party or candidate. We are merely providing an overview of the issue, identifying unique features of interest. For instance, the Humane Party created the ambitious concept of Zoocracy:

“A representative form of government in which members of all sentient species—not just homo sapiens—hold permanent political power of equal dignity.”

Another unique feature is that this party requires all candidates, officers, and board members to sign an Oath.  Those who take it need to abstain from the use of animal products and services and have a political abolitionist approach. In this context, this term means “the abolition of animal exploitation and propertization”. It creates a public way for people to hold their representatives accountable on behalf of other animals.  Shel, who has taken the oath, explains more:

“The Humane Party serves a non-voting constituency—namely, our constituents of other species:  cows, pigs, whales, snakes, crabs, grasshoppers, etc.  The Humane Party treats these beings as literal constituents with political personhood and legal standing.  But since these other animals are not able to vote directly or otherwise hold their representatives accountable—nor donate, nor protest, nor strike, nor revolt—the Humane Party must make a special point of finding humans who will not waiver in their faithfulness to these non-voting constituents’ interests.  This situation is thus, in ways, analogous to professions in which there is no adequate after-the-fact remedy, such as the medical or legal professions, and which, accordingly, require an oath.”

Unique Proposals Within the Humane Party Statement of Principles

The party’s stated goals includes establishing a system of guardianship for the rights of non-human individual animals or groups. By talking about groups, it aims to avoid speciesism, advocating:

A Presidential Race with a Vegan Flavor

In a 2016 interview with Aph Ko for Black Vegans Rock, Clifton Roberts talks about why he run: “I run because every four years, we’ve been promised change. And every four years, those promises have been exchanged.  I run because most citizens are naive or unaware that our continued consumption of death and turmoil soils our souls and darkens our conscious; leeches on to our logic and compromises our compassion.”

The Future of Politics Is Vegan

The parties of future centuries would not abandon any victim of human irresponsibility, regardless of their species.   A political system based on doing no harm, and repairing the harm already done, is the only way forward. Vegan parties, like the Humane Party or the Danish Veganerpartiet, could lead the way. The Humane Party of the United States is definitely an idea whose time has come.