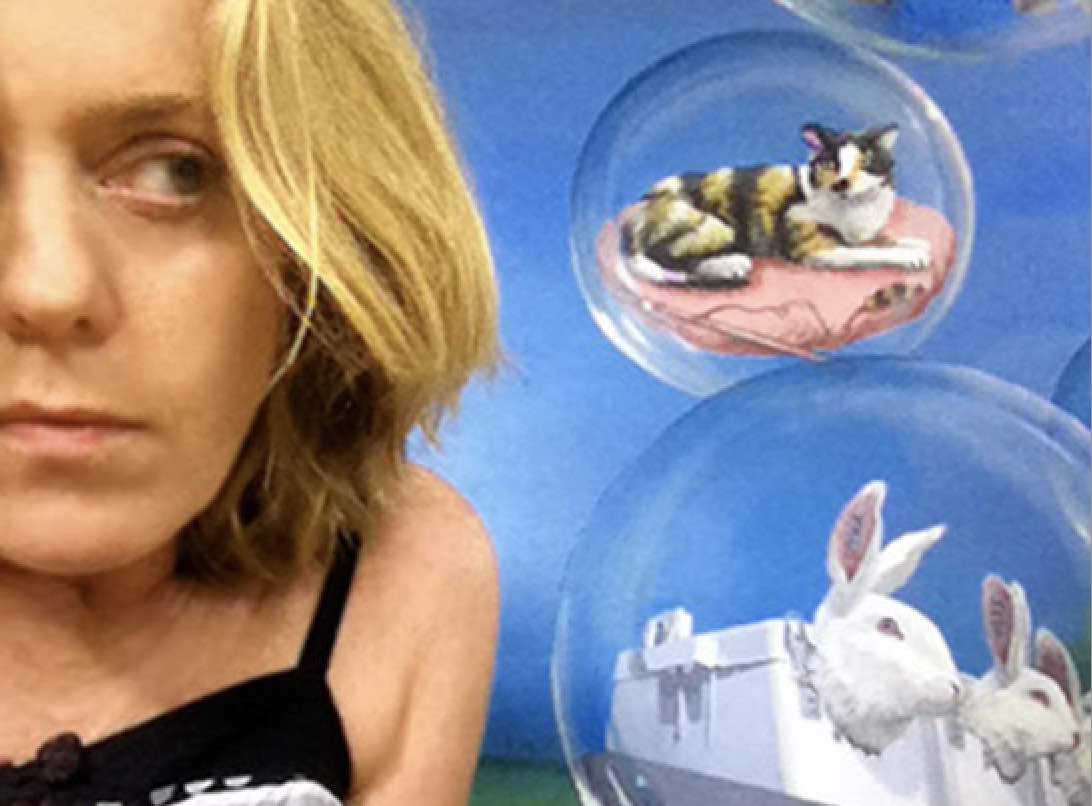 My new series is called State of the Union. I am painting all 50 states with the first goal of an exhibition at the New Bedford Art Museum in Massachusetts in June 2023. I do need all of that time to be ready as the paintings are each very labor-intensive and require much research.

The Truth Bubbles Up

Each painting has the kitschy postcard spelling of that state with the letters, and also the background of the painting, filled with the state animal, icons, symbols of the state, landscape and images to encompass what that state would like to share and promote for their image.  In bubbles I depict things that actually happen to animals in that state behind the scenes or maybe right in plain sight, things that cause enormous suffering for animals.

I have been painting animals for many years. I began by painting the animals I love and by celebrating their humor and beauty. But that was before I learned what horrors occurred behind the scenes… before I made the connection. I ate meat and dairy in ignorant bliss. But, somehow, the book Diet for a New America by John Robbins made it into my greasy paws, followed by an exhibition of Sue Coe’s artwork. The one-two punch opened my blind eyes.

Seeing The Truth with My Own Eyes, I Had to Show It in My Art

I was compelled to see if these crazy horrible things could REALLY be happening. They could. I could not believe the magnitude of the lie.  Talk about the Big Lie, the multifaceted cover-up to the degree of rewriting history with depictions of cows happily delivering their milk and babies in advertisements. It was downright evil.  My journey led me to become an ethical vegan and to start using my artwork as a way to communicate what I was learning, to speak out for those who couldn’t speak for themselves.

Here is California’s State of the Union

In bubbles, I depict the hidden animals.  In these bubbles, I show animal activists trying to save a downed calf and arrested for Grand Larceny, the captive Orcas of SeaWorld, the transport trucks packed with pigs headed to the fancifully painted slaughterhouse, the fires of CA, the deaths of infant monkeys used in animal experimentation at a prestigious California University, and the multiple deaths of racehorses at Santa Anita Raceway. These worlds float over the stylized images of California. Minnie Mouse holds the state flag with the bear as a symbol, waving over the bear, the state animal, near the Hollywood sign.

Editor’s note: Jane O’Hara is an extraordinarily accomplished artist. She has mounted solo exhibitions of her artwork at the William Scott Gallery in Provincetown, MA; the South Rotunda Gallery, Hynes Convention Center, Boston; and Gallery 55 in Natick, MA. Group exhibitions include Denise Bibro Fine Art, NYC; Flinn Gallery, Greenwich, CT; and William Scott Gallery. As both curator and artist, Jane is a Courage of Conscience Award honoree from the Peace Abbey which honors individuals and organizations that have distinguished themselves through humanitarian causes, peace, and social justice activism.