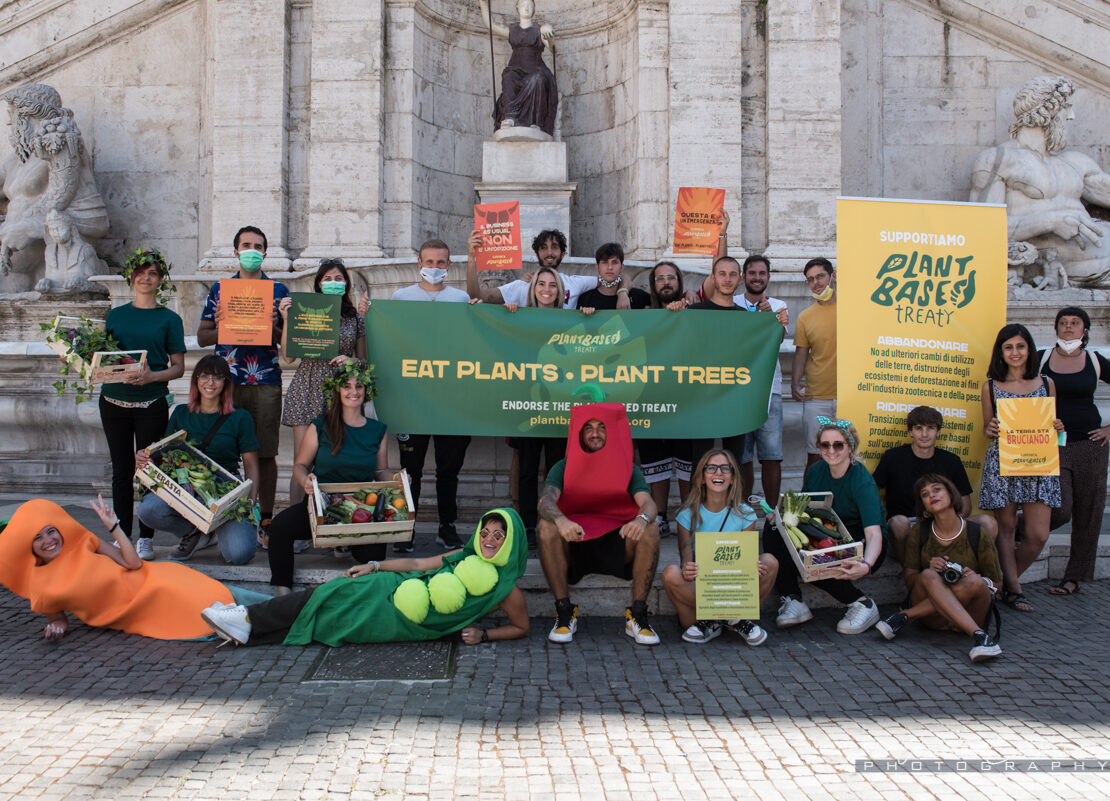 14 Members of Parliament Support the Plant Based Treaty

In her inimitable way, climate activist Greta Thunberg recently dismissed the world’s business-as-usual politicians with a perfectly delivered line. “Blah, blah, blah,” is how the acclaimed vegan teenager summarized the half-measures of Presidents and Prime Ministers, measures that are getting us nowhere but hotter, drier, and more desperate.

Now, come 14 British Members of Parliament who just might make Greta Thunberg proud. The 14 MPs have just publicly expressed support for the Plant Based Treaty, which seeks to move society away from environmentally disastrous meat and dairy-based policies to a sustainable plant-based economy. Now, all the MP’s should get on board!

Inspired by the Fossil Fuel Treaty!

Considering the severity of the climate emergency, all politicians should endorse the Plant Based Treaty…asap! Many have already heard about a similar treaty named the Fossil Fuel Non-Proliferation Treaty. This is a global initiative to phase out fossil fuels to tackle our global climate crisis. But, it only deals with part of the greenhouse gas problem. It overlooks dangerous greenhouse gases emitted by the animal agriculture industry, including the often-overlooked methane and nitrous oxide.

Whose Thumb Is On The Statistics Scale?

In 2006, the UN itself concluded that animal agriculture is responsible for at least 18% of greenhouse gas emissions. Then, the Worldwatch Institute, a Washington D.C. environmental think-tank, reported that livestock emissions account for 51% of greenhouse gases. One recent white paper argues animal agriculture could be responsible for as much as 87% of greenhouse gases. Other estimates downgrade it to 14.5% which critics say is due to the meat and dairy industry’s undue influence on the UN’s Food and Agriculture Organization. In 2013, the UN’s FAO publicly partnered with the International Meat Secretariat and the International Dairy Federation and then published downward revisions.

Bottom line. It’s a big issue that can be measured in many different ways. Whatever the actual figure, one thing nobody quibbles about is this: animal agriculture is devastating our planet. It’s accelerating climate change, habitat destruction, wildlife extinction, water pollution, drought, soil degradation, human world hunger, and preventable human diseases, like heart disease. Endorsing the Plant Based Treaty will address all of this. We need both treaties. Only one will fall short.

Anita Krajnc, Nicola Harris, and Genelle Butler are from the Canadian-based grassroots Animal Save Movement. On April 30, 2021, they met with Tzeporah Berman, the Chair of the Fossil Fuel Non-Proliferation Treaty Initiative. This inspired them to replicate this initiative for the remaining part of the problem: animal agriculture.

The Plant Based Treaty is a landmark international treaty. It is the first of its kind to put food systems at the heart of combating the climate crisis. The treaty aims to halt the widespread degradation of critical ecosystems caused by animal agriculture. It seeks a shift to plant-based diets that are healthier and which will collectively reverse the damage done to natural ecosystems and biodiversity.

Everyone Can Endorse the Plant Based Treaty

Anybody can endorse the treaty either as an individual, an organization, or a business. Cities, states, and provinces are also urged to sign. It’s easy, free and can be done in about a minute by visiting plantbasedtreaty.org. Nicola Harris, communications director for the Plant Based Treaty Initiative, tells us more:

“As a companion to the Paris Agreement, the Plant Based Treaty addresses the climate, oceans, biodiversity and animal crisis. It puts diet change at the forefront of climate solutions by bringing together individuals, groups, businesses and cities in a call to action for national governments to strike a global agreement about a shift to a plant-based food system.”

Despite only being launched on August 31st, 2021, it has already been endorsed by many people all over the world. Over 9,000 individuals, 20 celebrities, 175 businesses, and 350 organizations have endorsed with more coming in by the minute. More than 40 politicians have also endorsed it.

But, More Politicians Are Needed. How ’bout it MPs?

Politicians can endorse the Plant Based Treaty in a personal capacity, representing their parties, or even representing a geographical jurisdiction. The Argentinian city of Rosario, in Sante Fe, and the US city of Boynton Beach, in Florida, have already done so.

“We need to talk about animal agriculture. We are on track to reach 1.5C warming around 2030 and 2C by 2040 and we must focus on solutions, such as the Plant Based Treaty and Fossil Fuel Treaty, to meet our obligations under the Paris Agreement”– Nicola Harris, communications director for the Plant Based Treaty Initiative

We know that embracing the vegan philosophy will address the problem of animal agriculture. But, it will take too long for most of the earth’s population to become vegan. We need to address this urgently at the international level. The ideal venue to do this is the UN Climate Change Conference (known as COP26). It will be held in Glasgow, UK, from October 31st through November 12th, 2021.

Nicola has this to say about this important conference:

“All eyes are on Glasgow as we edge closer to COP26 and 1.5C warming. Now is the time to show climate action leadership and address the methane emergency. Rapid reductions in methane remain our biggest hope of limiting temperature rises over the next 25 years. And every one of us can make that happen by switching to a plant-based diet.”

Alex Bourke, a City Campaigner for the Plant Based Treaty Initiative who will attend COP26, told me:

“I joined the Plant Based Treaty UK team because this is the crucial missing part of the Paris agreement. When I’m 89 years old in 2050, I want to be able to look Greta’s generation in the eye and know that I did right, that humans had rolled back animal agriculture in the 2020s and reached net zero in that decade.  Over the next 20 years the restored forests (land freed from cattle grazing and growing commodity crops to feed farmed animals) will have been soaking up carbon and returned the world’s weather to normal.”

“The alternative? Net zero in 30 years, maybe, with two or even six degrees temperature rise, no trees left, mass extinctions, resource wars, and a billion climate refugees. That is not happening on my watch.” – Alex Bourke, City Campaigner, Plant Based Treaty Initiative

Bravo to the 14 MPs Supporting The Plant Based Treaty

There is now an early day motion (EDM) number 434 circulating in the UK Parliament. MPs can sign it, and so far, 14 have done so. It’s titled: Support for the Plant Based Treaty. This is the wording of the motion:

“That this House welcomes the Plant Based Treaty aiming to put food systems at the heart of combating the climate crisis by encouraging a shift to healthier and sustainable plant-based diets, while simultaneously working to reverse the damage to ecosystems and biodiversity; and calls on the Government to use COP26 in Glasgow as an opportunity to be a world leader in recognizing the negative impact of industrial animal agriculture on climate change and commit to developing a global strategy to transition towards more sustainable plant-based food systems.”

“I applaud the 14 UK MPs who have shown climate action leadership by calling on the Government to put animal agriculture on the agenda at COP26 and focus on a global transition to a plant-based food system.”– Nicola Harris, communications director for the Plant Based Treaty Initiative

An Easy Way for Politicians to Endorse the Plant Based Treaty

There is an easy way that any politician from any country can support the Plant Based Treaty and ask it to be considered during COP26. The campaign running this initiative has set up a webpage where politicians can sign a statement of support. It’s an open letter to the President of COP26, the Rt Hon Alok Sharma MP, titled: We Need to Talk About Animal Agriculture.

This is what one of the signatories of the letter, the Hon Emma Hurst MP, from the Animal Justice Party in Australia, has said:

“Right now millions of animals are facing the terror of the slaughterhouse and our climate crisis is edging closer to the point of becoming irreversible. But, it’s not too late for a solution. Now is the time to stand up and speak the truth and speak it loudly. Let’s be relentless, let’s demand change. Let’s rise fearlessly and speak out against injustice.”

“We all need to play our part. The hard reality is we cannot continue with a business-as-usual attitude. We can all make changes. One such change is moving away from a meat-based diet to a plant-based one.” -Andrew Varney, Deputy Mayor of Bristol City Council, UK