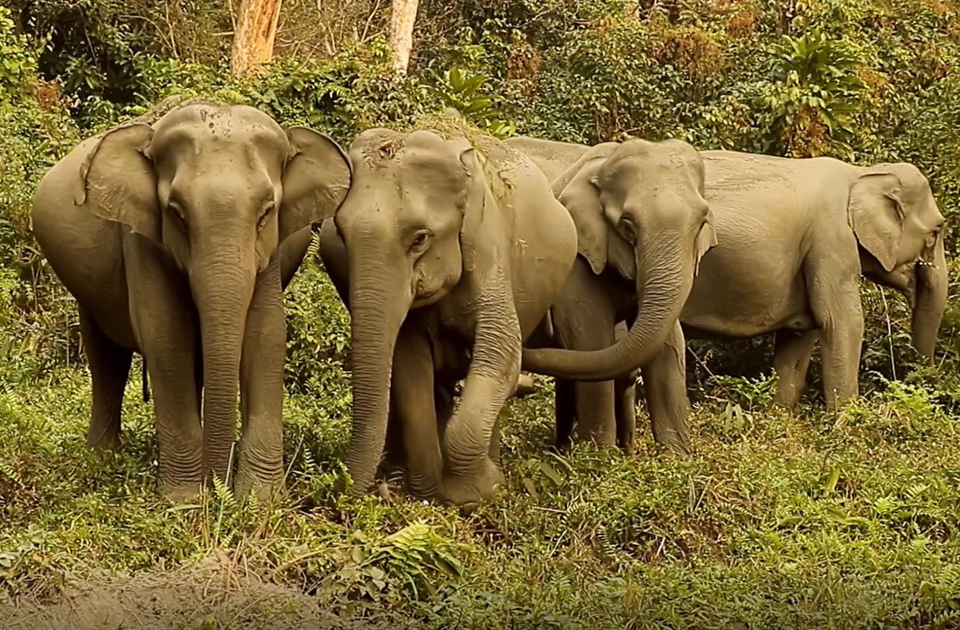 The new documentary series, Asian Elephants 101, is now streaming on UnchainedTV  to showcase the plight of India’s most iconic species.

Asian Elephants 101 is a powerful TV series produced by renowned wildlife filmmaker and author Sangita Iyer, and funded by the National Geographic Society. Visually stunning, including some never before seen imagery of elephants, the series lays out the plight of India’s most iconic species and how we can save them.  Two years in the making, the first nine episodes of the 26-part Asian Elephants 101 series are currently streaming on UnchainedTV with more on the way.

Network founder Jane Velez-Mitchell said: “UnchainedTV is delighted to announce the launch of the Asian Elephants 101 series. It’s a must watch if you care about animals. It is produced by one of the world’s top elephant experts. Sangita Iyer is also the author of Gods in Shackles, which is one of Amazon’s top animal rights books.  She is also the founder of  The Elephant Matrix. The films are currently streaming on UnchainedTV. Download our new, FREE, streaming network via your app store on your iPhone or Android phone. You can also download the APP on your TV by searching for UnchainedTV on your Amazon Fire Stick, Roku device, AppleTV device or via your LG or Samsung SmartTV. The films have their own UnchainedTV channel: The Elephant Matrix.” The first seven videos are already available on the channel.

Jane also had a conversation with Sangita Iyer, which you can watch in its entirety here:

Indian-Canadian, Sangita Iyer is a true Renaissance woman. Along with being a documentary filmmaker and author, she is also a biologist She is also the founder and president of the Voice for Asian Elephants Society, created in 2016 to protect the wild and captive elephants of India and other Asiatic countries. Iyer’s debut documentary film, Gods in Shackles, was based on the treatment of captive elephants in Kerala. It received 13 international film festival awards.

Iyer describes the Asian Elephants 101 series this way: “Our mission in producing the 26-part short film series, Asian Elephants 101, is to highlight the survival challenges faced by people and elephants, as two dominant species competing for space. The short films, each no more than seven minutes long, are grounded in principles that foster cooperation and coexistence. They focus on key aspects of elephant ecology, the plight of captive elephants, factors contributing human/elephant conflict, human encroachment into wildlife habitats, climate change, habitat fragmentation and deforestation, among other topics.”

Says Iyer, “Our ultimate goal is not only to foster empathy, awe, reverence and love for these magnificent animals, but also to influence decision-makers to legislate laws that would take into consideration elephants, wildlife and the rich biodiversity of India. We hope that the narratives and visuals will help people understand our intricate connections with and dependence on other species, inspiring behavioral shifts, motivating people to protect the endangered Asian elephants.

“The films will help people realize that the survival of elephants in the forests of India is crucial to mitigating climate change globally, demonstrating that what happens in one country reverberates across the planet.”– Sangita Iyer, The Elephant Matrix.”

To help educate people about elephants, Iyer also created The Elephant Matrix. According to its website, this is a safe ecosystem where humans convene to learn about the intrinsic nature of elephants. Its mission is to help people evolve by modeling the values that elephant societies embody.  The ultimate goal is to foster a harmonious coexistence between humans and all sentient beings.

“I’ve witnessed so many elephants suffering in captivity. Seeing these elephants in the wild, and then seeing them in captivity, it’s just absolutely devastating.” – Sangita Iyer, The Elephant Matrix

Asian Elephants Are Under Threat

Elephants are very important animals for natural ecosystems. When they walk through the forest they trample softwood trees, thus allowing rain and sunshine to penetrate the ground. This promotes hardwood trees that store more CO2. They also create pathways to waterholes and fodder for other animals, who would otherwise be unable to access these life-giving sources.

Asian elephants are on the endangered species’ list of The International Union for Conservation of Nature (IUCN). According to the IUCN, there are less than 40,000 Asian elephants left on the planet. They live in forested regions of India and throughout Southeast Asia, including Myanmar, Thailand, Cambodia, and Laos. But 55% (27,000) of them are in India, their last bastion. Asian Elephants 101 shows the problems they are facing there.

Human elephant conflict (HEC) is rampant, due to the unprecedented human population growth in India, driving competition for space. Reckless development and land use have decimated 80% of wildlife habitats. Starving elephants leave the forests and venture into croplands to quell their hunger, which triggers the farmers to retaliate by killing them. Another major issue facing elephants in India is their illegal capture. On the one hand, some people revere these iconic animals, but on the other hand, they torture and exploit them for profit behind the veil of culture and religion. The documentary shows how confinement and constant abuse traumatize these animals, leading to Post Traumatic Stress Disorder (PTSD).

Iyer said to The Hindu, “Male elephants are declining dramatically, as they are targeted by poachers for their tusks, and exploited in ‘cultural festivals’ of Kerala. Of the 27,000-odd wild elephants, just over 1,000 of them are bull elephants. This will inevitably cause inbreeding, leading to deformities and deadly diseases, threatening the long-term survival of the species.”

A Voice for the Elephants

The Voice of Asian Elephants Society aims to protect endangered Asian elephants and their habitats in India, while also ensuring that native people and those living near the forest fringes have their basic needs met so they can coexist peacefully with these magnificent animals. It actively helps elephants through six mandates.

“When you meet the elephants in person they are so gentle, reflective, and soft.” – Sangita Iyer, The Elephant Matrix

What Can We All Do to Help?

The first thing everyone can do is to boycott any organization that exploits these animals, in  particular, circuses with animals, zoos, and the tours that include elephant rides. Iyer explained more:

“If you have an elephant ride on your bucket list, cancel it! Why is it horrible to ride an elephant? First of all, Asian elephants have a protruding spine. They have to carry a massive chair weighing approximately 300 kilos. And, on top of that, many people are also heavy. So, they end up carrying 500 or 600 kilos of weight on their back. Many of them collapse from heat exhaustion. Do not ride an elephant, do not attend circuses because, by doing that, you are facilitating the abuse.

“These poor elephants standing beneath the scorching sun, deprived of food, water, and shelter. Nothing to protect them from the hot sun. People need to be aware. Just look down, look at their legs. Their chains cutting into the ankles, blood oozing out of their flesh, the tumors on their hips. It’s unbearable.”

You can also support projects to help elephants in India. One of them is to save elephants in West Bengal from deadly accidents in train tracts. It will install EleSensors that would alert the train drivers of their presence nearby, so they can slow down. There is a Globalgiving page set up to crowdfund for it.

“It’s just really heartbreaking to see how these elephants have been ripped apart from their families, subjugated, just so humans can be entertained in zoos, circuses, as well as these so-called cultural and religious festivals.” – Sangita Iyer, The Elephant Matrix