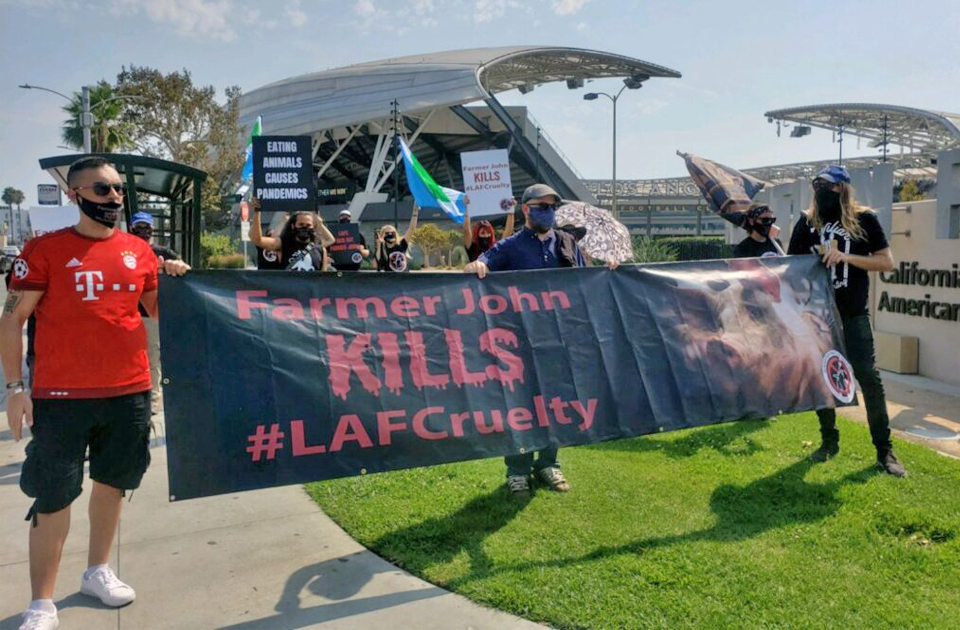 The Farmer John slaughterhouse, a 10-minute drive from downtown Los Angeles, is adorned with a long mural of happy pigs frolicking in the grass. It’s ironic because this massive facility is where pigs go to be die. Millions of pigs have been trucked in and slaughtered here. A famous landmark to some, an infamous death chamber to others, the facility – in its current incarnation – is about to be tossed into the dustbin of history. Farmer John, which turns pigs into hot dogs, is shutting down at the start of 2023.

Farmer John is owned by Smithfield Foods, which is – in turn – owned by a Chinese mega-corporation. While Farmer John is being shuttered, the mega-meat company carries on. So the question becomes…

What Does This Mean for Pigs?

The news brought a mixture of elation and concern to animal rights activists who have converged outside this facility for years to give water, kind words and a loving touch to the animals. These pigs are still babies, usually just about six months of age, when they arrive in crowded trucks after a distant journey, appearing confused, thirsty and often terrified.

These slaughterhouse events, originated by the Animal Save Movement, are known as “vigils.” Activists wait for the pig-bearing trucks to stop outside the killing facility’s gate and take that moment to say goodbye and to “bear witness” to the pigs’ sad demise. These poignant events often attract hundreds of people seeking an end to the meat industry, including vegan celebrities like Joaquin Phoenix and Moby. However, with the closure of Farmer John, the current Los Angeles stage for those emotionally potent events will be gone.

The instinct of any animal rights activist, hearing the news of a “closure” of an animal facility, is to celebrate. But if the facility that closes is the slaughterhouse that kills the animals, rather than the farms where they are born, they know that such closure will likely not prevent their deaths. Therefore, for animal rights activists in L.A., this news has generated mixed feelings. They are glad to see one battalion of the animal agriculture industry on the retreat, perhaps indicating that their vigils and protests are having an effect. But, many suspect that Smithfield Foods will still kill just as many pigs… just somewhere else.

“It’s kind of like a double-sided sword. I am happy to see it shut down, but the bottom line is we don’t want any of these being dying.”- Cesar Asebedo, animal rights activist

UnchainedTV’s Jane Velez-Mitchell reported live on UnchainedTV Facebook on this breaking news, and she interviewed Amy Jean Davis of LA Animal Save, Ellen Dent and Cesar Asebedo of Animal Alliance Network and Joe Enriquez Henry of Forward Latino to get their reaction to the news. You can watch the whole interview here:

Why Is This Pig Slaughterhouse Closing Down?

According to a Smithfield Foods, Inc. statement, the decision was made due to the “escalating cost of doing business in California.” The company also said it will decrease its sow herd in Utah and is looking to exit its farms in Arizona and California.

Ellen Andrea Dent, from Animal Alliance Network, one of the grassroots groups that have staged vigils outside Farmer John, said she had a call with a representative from Smithfield Foods just before UnchainedTV interviewed her. This is what she says she took away from that call:

“I did just get off the phone with a representative from Smithfield and they said that this is definitely happening within the next six months and that they’re going to be closing down and shifting their operations towards the Midwest.”

Dent said the Smithfield representative expressed a willingness to have a dialogue with the animal activists..

“They’re willing to have more conversations with us about our perspective on bringing more plant-based meat into the marketplace.”

Dent said she also asked them about the possibility of rescuing any of the pigs, but says the suggestion was dismissed.

“He basically told me that I was probably being ridiculous. He said that the farmers raised those pigs to be food and that it diminishes the work that they’re doing to ask to take them to a sanctuary.”

How Do Local Activists Feel About the Closure of the Pig Slaughterhouse?

Amy Jean Davis organizes vigils outside the pig slaughterhouse for the grassroots group Los Angeles Animal Save. She had mixed feelings about the news:

Cesar Asebedo, of Animal Alliance Network, said the following: “My emotional reaction was just shock, pure shock. I would love to rescue as many beings as we can. That’s why we’re out there weekly, for all these amazing beings. I would love to see it turn into a mushroom farm or something. That would be amazing.”

According to media reports, between 1,800 and 2,500 employees could be laid off. Joe Enriquez Henry, of the pro-union organization Forward Latino, said, “The challenge to achieve these super profits that these corporations are trying to do, clearly they can’t do it in California, where there are strong laws and good worker rights laws. So, they want to move to areas such as the Midwest, where they can make a huge profits based on exploiting workers and on the killing of animals.”

“I just don’t know exactly what this is going to mean in the big picture. I’m not quite ready to celebrate.”– Amy Jean Davis, animal rights activist

Even though this closure does not necessarily mean that fewer animals will die, in the long term one can interpret this news positively or negatively.

On one hand, Smithfield Foods is moving operations from vegan-rich California and possibly heading to more remote mid-western locations. That could diminish publicity for the animal rights movement and rob activists of accessibility to the core operations of animal agriculture.

On the other hand, this may be a sign that the entire animal agriculture industry is on the run. And, perhaps in the future, California will implement laws that could prevent Smithfield’s products from being sold there. Among those activists interviewed, there seems agreement. The improvements of animal and human rights legislation in California is – to a great extent – what has driven Smithfield Foods into “retreat.”

Davis said, “the worst-case scenario is that there’s going to be no slaughterhouse in Los Angeles, which is a prime location due to it being a huge city and having tons of activists in the area. Best-case scenario is this is a sign of the meat industry beginning to shut down. In a way, they’re having major expenses with having to move operations to somewhere other than California, not just the slaughterhouse but the farms as well.”

“When the pig slaughterhouse closes, it should turn into an animal rights museum.”- Aylam Orian, head of National Animal Rights Day

UNCHAINEDTV invites Smithfield Foods Inc. and Farmer John to comment on this story.