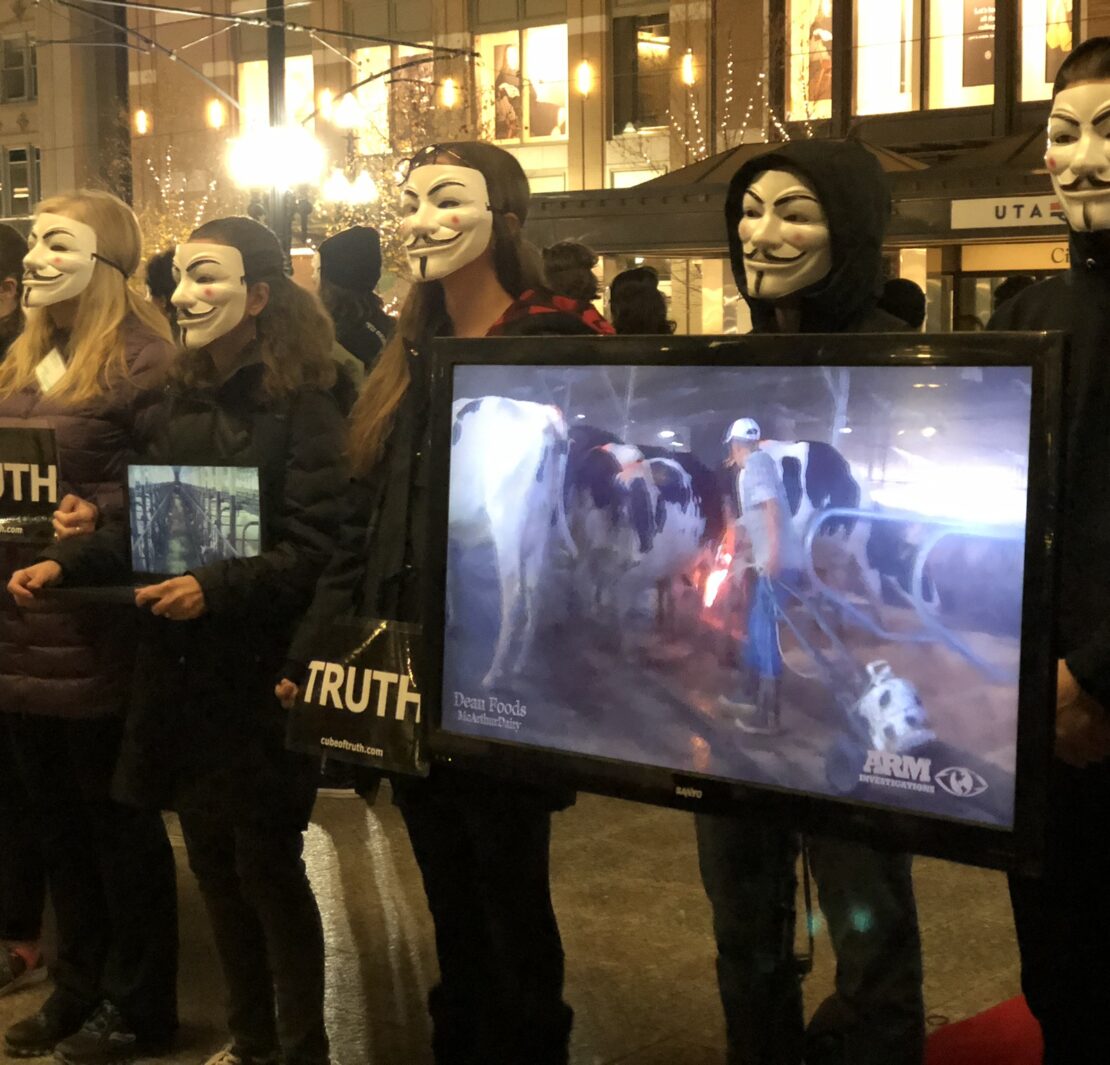 #JaneUnChained #LIVE at the largest Cube of Truth ever in Utah! Direct Action Everywhere – DxE leads the Animal Liberation Western Convergence here, mobilizing hundreds of activists from across the world to spread the word about compassion in this state where there is a tremendous amount of animal agriculture! According to the Utah Department of Agriculture and Food, “Animal agriculture in Utah represents the single largest sector of farm income in Utah. At a value of more than $1 billion, and with 25 of the state’s 29 counties reporting livestock as the dominant agriculture sector.” With statistics like these, there could not be a more ideal place to hold this Cube of Truth or this convergence.

A Cube of Truth is a static art demonstration where activists with the group Anonymous for the Voiceless, hold screens with images from the animal agriculture industry and animal testing. “This is not a movie” on the screens you see. This is the reality that these animals face. Unbelievable acts of cruelty towards animals occurs every second of every day around the world. These activists are here this day to show the truth in hopes to open peoples’ minds and hearts to change.
This form of activism has proven to be incredibly effective and popular. According to the Anonymous for the Voiceless website they have had, “over 8,493 demonstrations in 806 cities worldwide, we’ve convinced at least 308,771 bystanders to take veganism seriously.” Activists wear Guy Fox masks in a cube while they hold the screens silently and passerbys often stop and watch the footage. It is incredibly impactful to see the footage and then have another person come and talk to that person viewing the footage. They explain to them what they are seeing and they take it step further and ask that person to think about what they are seeing.
Then, they ask them to relate their lifestyle choices to what they are seeing on the screens. Knowing is half the battle and this demonstration accomplishes this task. Asking people to realize their responsibility for the vey real terror they see on these screens. Then it is their choice to decide for themselves and these animals if they will change to put an end to their suffering. The Cube of Truth you see here in Utah is part of a worldwide movement for change and we could not be prouder to be a part of it!

Any animal agriculture/meat company representatives are invited on any time to respond!

Visit the Anonymous for the Voiceless website and get involved!