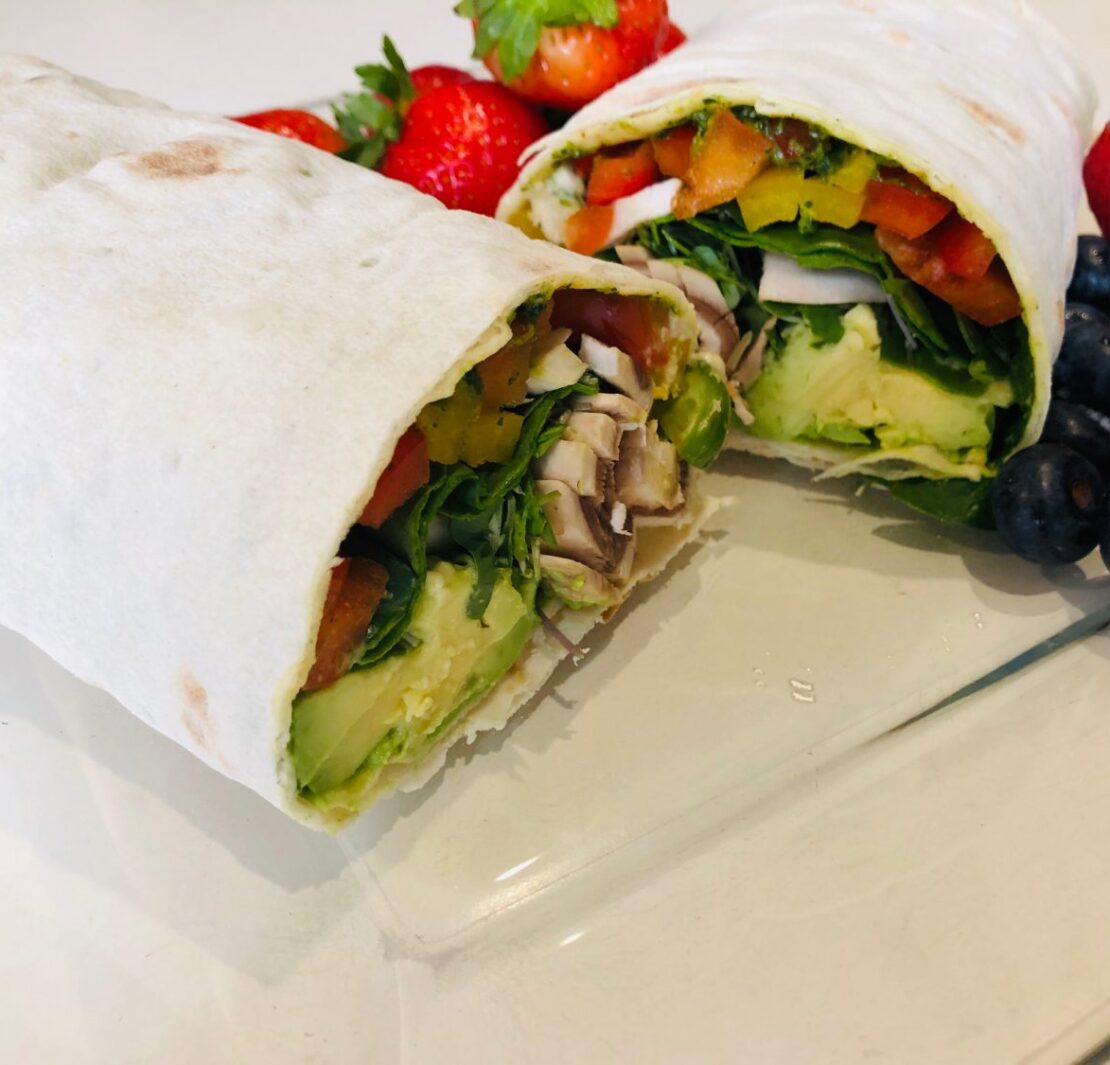 #LunchBreakLIVE with VeganFlagship creator and founder, Patrizia Mari Barretto! Join us as she makes her quick and easy veggie wraps as she discusses the future of the Vegan Flagship and her collaboration with Sailesh Rao the founder of Prevent Year ZERO – Vegan World 2026!, VeganNation and Gad V Hakimi the designer and founder of the Vegan Flag.
Patrizia is flying solo today, so she is holding the camera with one hand and making the wrap with the other.  The key is to chop the vegetables beforehand and prep before you start filming. Patrizia is ready to go with all these amazing healthy ingredients. She uses peppers, mushrooms, avocados, zucchini, and even blueberries in her wrap! She also uses kale pesto spread from Trader Joes and hummus. Patrizia eats mostly raw vegan at home because she doesn’t have an oven to cook in. She also eats almost everything she buys at their peak of freshness within 24 hours because she doesn’t have a refrigerator either. It is back to basics over here, and we have no doubt that this way of living has endless benefits. Patrizia skillfully finishes wrapping the wrap with one hand and cutting it. This wrap is super fresh, delicious, and nutritious! This is definitely a healthy meal that you could eat even in a rush everyday!
Recently, Patrizia met with Dr. Salesh Rao of Climate Healers, the group trying to prevent year zero as part of Vegan World 2026. Patrizia asked him to incorporate the vegan flag in his organization’s movement, and they agreed. The Vegan Flag will now proudly wave alongside this amazing work to heal the planet. But it doesn’t end there. Patrizia has been helping spread the vegan flag to the world. She has recruited activists and vegans in Germany, Taiwan, Uruguay, Africa, Jamaica, The United Kingdom, and every country in Central South America. They are trying to show the world they can spread the word about veganism without having to have a huge company or organization. This Vegan Flag movement is grass roots. Patrizia and her team members are promoting the Vegan Flag from home. Their hope is a better future for future generations. By spreading the message of conscientious living, people give the planet a chance to survive. Support the Vegan Flag and it’s message however you can and help Patrizia and her cohorts save the world!

Recipe For Bruschetta , Tailored For The Fall