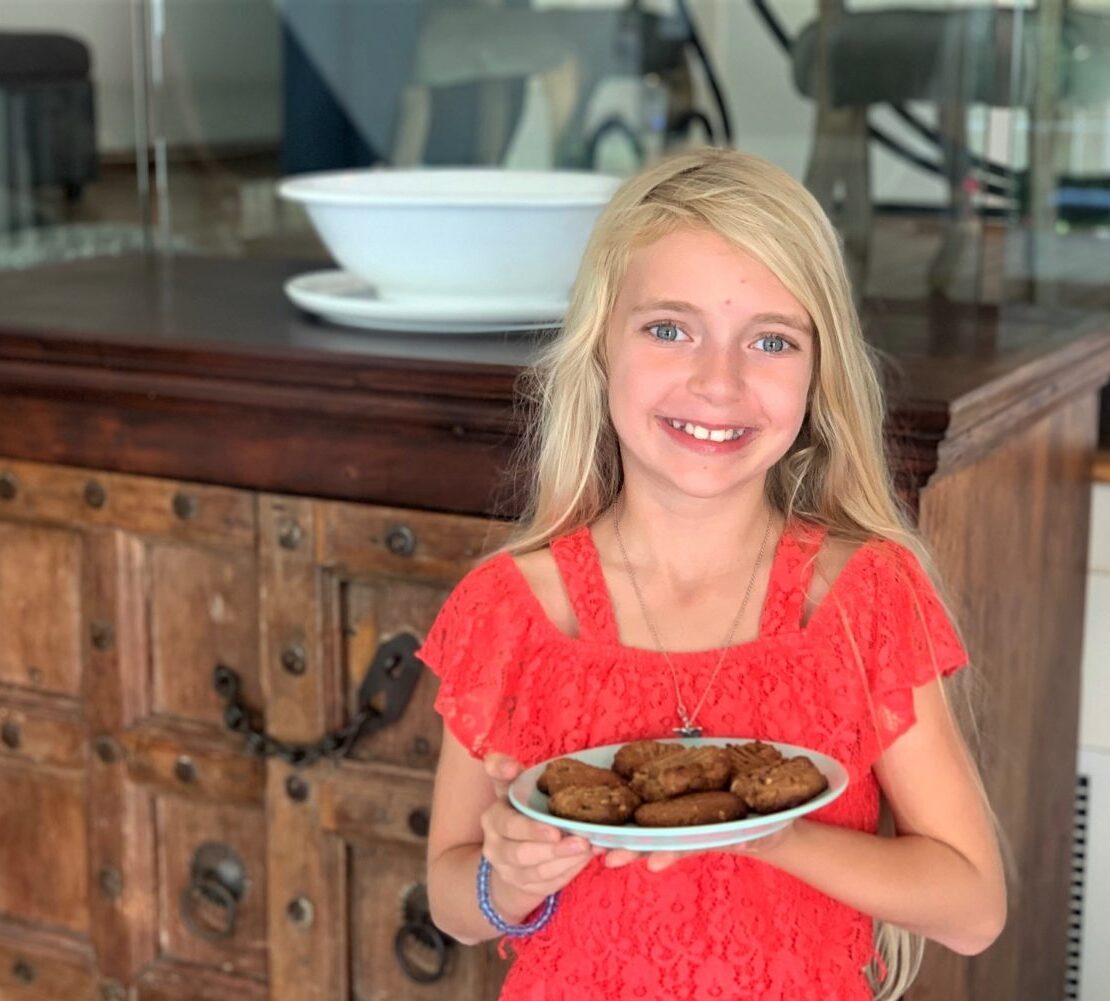 LunchBreakLIVE with vegan actor, producer, director Brett Lark I’d Await Fame, with his adorable 9-year-old daughter Tehya Mae! Today they’re making marvelous, magical vegan hot chocolate and peanut butter cookies! Brett tells his extraordinary personal story of overcoming cancer after he switched to a plant-based diet!
Brett was 6 yrs old when he was diagnosed with skin cancer. Every year he had to get the cancer cut off surgically when it came back. When he was 21 years old he was diagnosed with stage 4 lymphoma that was spreading to his brain! He had a giant tumor on his neck. He didn’t know what to do but he felt that he needed to fight his cancer with natural methods. He did his research and decided to try a plant-based diet. On a plant-based diet, his cancerous tumor shrank and eventually disappeared. Now, he has been vegan and cancer-free for 12 years! He says he’s never felt better. He has so much energy he doesn’t even need an alarm clock to get him out of bed anymore!
Brett is also an accomplished performer! He has been acting since he was only 3 years old! When he was 10 years old, he sang on his paper route and people loved it so much they would give him extra tips! In his teens, his family moved with him to LA and they ended up moving back to Colorado after his manager abused him. Brett gave up on his dreams until Tehya Mae encouraged him to start producing plays and acting again. They started a nonprofit called Secret Identity Pictures and had wildly successful plays all over  Colorado. Brett and Tehya knew they had to come back to Los Angeles to pursue both of their dreams. Tehya Mae is also an actress. She has booked 5 out of 8 auditions in LA already! Brett recently starred in the award-winning film Await. These two are such an amazing father-daughter team and we can’t wait to see what they do next!
Brett and Tehya Mae came prepared today and already have the cookies ready for the oven. While they wait for the heat to rise to 350 degrees, they whip up some delicious vegan hot chocolate! Brett points out that the recipe from today’s goodies is from an awesome vegan cookbook named, The Complete Guide to Vegan Food Substitutions.  Tehya Mae explains these cookies and hot chocolate make a perfect sweet snack even at midnight! She is too cute for words and she’s quick-witted beyond her years! Jane jumps in for the taste test and starts singing with Brett the cookies and hot chocolate are so good! Trying making yours at home with the recipes below and don’t forget to bring the drama like Brett and Tehya Mae do!
Check out Brett’s IMDB Profile!
Follow Teyha Mae on YouTube!
Jane Velez-Mitchell reporting for JaneUnChained News Network.
Photos courtesy of Jane Velez-Mitchell.
See Also
Food Recipes

Out, Loud, And Proud For The Animals!