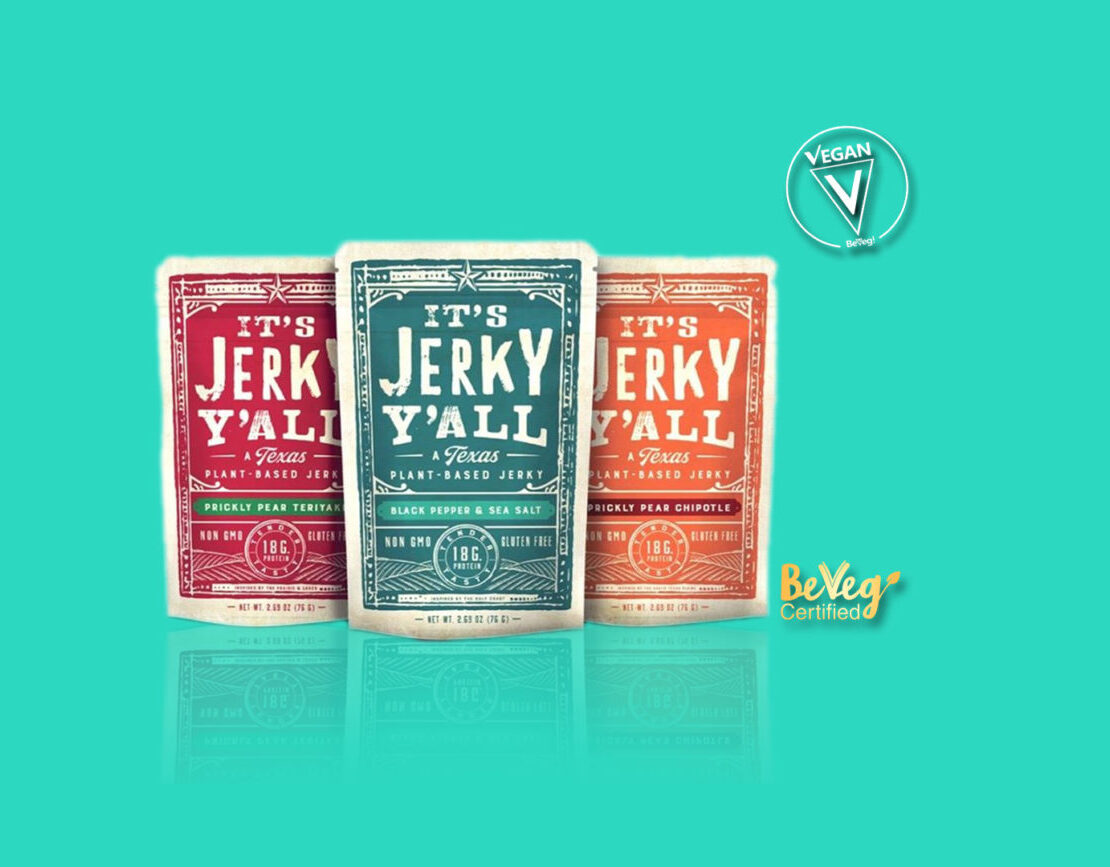 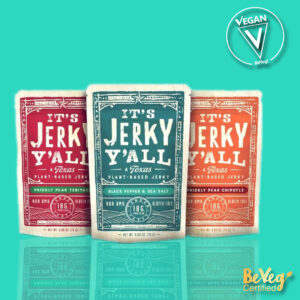 All Y’alls Foods Globally Certifies Vegan with BeVeg. The Texas company announces its vegan certification as it rolls out in big-name stores across the country.

WEST PALM BEACH, FL, UNITED STATES, May 23, 2020,/EINPresswire.com/ — Texas-All Y’alls Foods, the maker of “It’s Jerky Y’all” officially announces its BeVeg vegan product certification for all of their current & forthcoming snacks. This comes on the heels of its debut in 85 H-E-B stores.

We want our customers to be confident that all we offer is 100% vegan. With BeVeg’s stringent requirements and vegan focused mission we are excited to have their official vegan certification trademark on our packaging as we enter the major grocery chains. A trusted vegan claim is important to our brand audience,” says All Y’alls Foods CEO Brett Christoffel.

After an extensive review of All Y’alls Foods production practices, trade secrets, and ingredients, their tasty vegan snacks passed the detailed BeVeg vegan certification process. These meat alternative protein snacks use whole non-GMO soybeans, and also contain antioxidants and phytonutrients that are linked to various health benefits. These snacks do not use any preservatives or toxic chemicals, and they are cholesterol free.

Vegan labeling law, or lack thereof, is a serious matter, as vegan claims without certification often lack merit. Current laws do not require all ingredient, supplier, and process disclosures in order to claim “vegan” on packaging. In fact, existing laws do not hold vegan claims accountable at all since the word vegan is not even a recognized or defined term within the law. BeVeg law firm has set out a vegan standard. Products and businesses that believe in consumer transparency understand the importance of certifying vegan. BeVeg is on a mission to define and carve out a legally defined and globally recognized vegan standard. BeVeg demands honest information and only licenses use of its vegan logo to conscious companies in alignment with the lawyer set out vegan standards, as outlined at www.beveg.com. When you see the BeVeg vegan certified logo you know that that product proved its vegan claim to protect the vegan interest, which the law does not currently protect.

All Y’alls Foods was chosen as one of H-E-Bs 2019 twenty Primo Picks out of 846 entrants, which has given them the privilege of being on H-E-B shelves. However, while these little vegan snacks are now a big deal (as one would expect coming out of Texas where everything is bigger) these BeVeg vegan certified snacks are also at all y’alls fingertips with just a click. In a time with imposed social distancing guidelines, these vegan jerky snacks can be delivered to your door in three delicious flavors, including Black Pepper & Sea Salt; Prickly Pear Teriyaki; and Prickly Pear Chipotle.

Not only have these vegan jerky snacks won food awards for their good taste, but purchasing these snacks also makes you feel good. In addition to saving cows by making a delicious plant-based alternative, All Y’alls Foods also supports Rowdy Girl Sanctuary, a 501c3 non-profit in Waelder, Texas by donating a portion of their proceeds to the sanctuary. Notably, Rowdy Girl Sanctuary has the largest herd of rescued cows in Texas. In addition to caring for well over 100 animals they have a Ranchers Advocacy Program, which empowers ranchers and others in animal agriculture to shift to veganic farming and to keep operating their business, just in a new way. The BeVeg vegan certification fee went 100% to Jane Unchained News Network, a 501c3 non-profit media outlet for the animals.

Information contained on this page is provided by an independent third-party content provider. Frankly and this Site make no warranties or representations in connection therewith. If you are affiliated with this page and would like it removed please contact pressreleases@franklymedia.com

BeVeg is the only law-firm-issued vegan symbol with global trademark protection. Represented in all continents except Antarctica. Are you ready to be “officially vegan“? 100% of your certification fee will go to Jane Unchained News Network, a 501c3 non-profit for animals and the vegan lifestyle. Get vegan certified here.