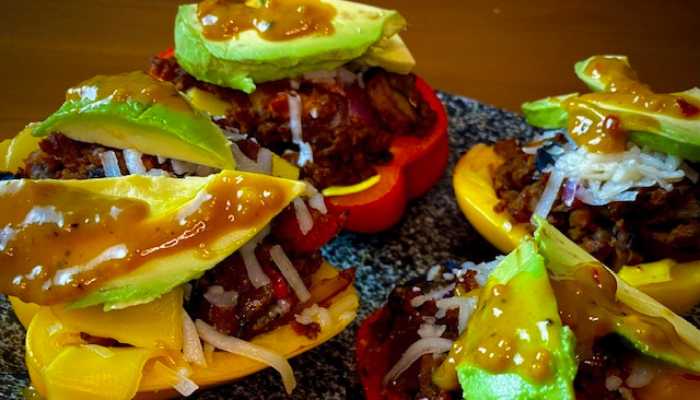 These Vegan Stuffed Peppers Are So Easy + Tasty!

Passionate, creative, energetic, focused, and magnetic Courtney Grant, Chef Host of “Vegan Cooking With Courtney” joins us for #LunchBreakLIVE!  He will be making beautiful and colorful vegan stuffed peppers with Umami, Basil, Beefless Beef, and more.  These stuffed peppers are so simple to make and so totally delicious you will definitely be coming back for seconds!  Let’s see how he does it…

Courtney Grant has been vegan for 2 years, dealing with health issues he made the switch to a plant-based lifestyle, and never looked back! Feeling as great as he did and seeing that so many people didn’t see the fullness of food and flavors that being vegan can bring, he wanted to start a vegan channel to uplift the community and bring awareness not only to vegans but to non-vegans as well! Cooking comfort food for him has been such a joy as he grew up in Jamaica and Florida with his family eating comfort food around the dinner table. Eating healthy is something he always strives for but every now and then a cheat meal or two won’t hurt. Now in California dishing out some amazing meals on his channel Vegan Cooking with Courtney, trying to reach as many people as possible. His journey started out with health and taking care of himself and has led him to now want to spread awareness not only to take care of yourself but the environment that surrounds us and the animals that can’t defend themselves. So go and watch some amazing cooking with Courtney.

Vegan Stuffed Peppers Stuffed With Plant-Based beef and So Much More!

I love Trader Joes Beefless beef.  That is my go-to vegan beef for sure.  I use it often for tacos!  It absorbs flavor beautifully and cooks so easily.  It is perfect for stuffed peppers.  But you can use any brand of vegan beef crumbles you prefer for this recipe.  As long as you keep the animal products out, you’re good to go. The same goes for your cheese choice.  You can use whatever vegan cheese brand you prefer in this recipe.  I think I would probably use Daiya for this.  It melts so nicely.  Courtney used Follow Your Heart vegan Provolone cheese and Trader Joes Mozzarella Style Shreds. Also delicious choices.

Wow-what a delicious episode of #LunchBreakLIVE.  There are so many delicious ways to cook up incredible vegan meals and Courtney is a Pro at it!  Below is Courtney’s recipe for these tasty vegan stuffed peppers, so I hope you will try to make them at home.  If you are looking for more awesome plant-based recipes, we have a ton to choose from so be sure to check those out.  Until next time…keep cookin’! 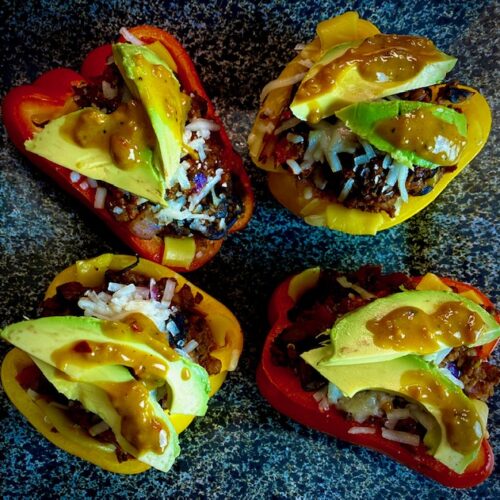 Vegan Shepherd’s Pie. A Favorite For All!