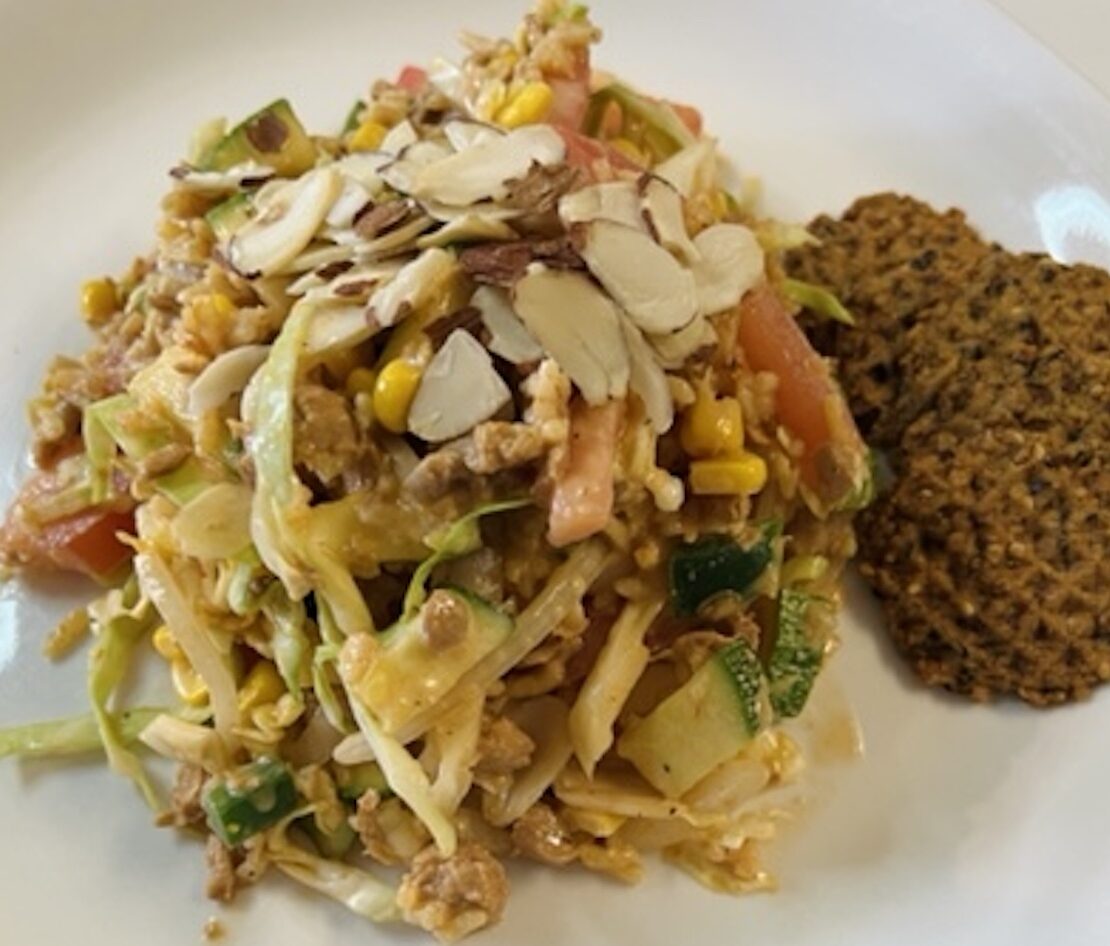 This Is One Amazing Vegan Tuna Salad Recipe

The best vegan tuna salad recipe revealed in this episode of #LunchBreakLIVE! A very special guest joins us today.  Stéphanie Gérard is an actress, singer, TV host, and comedienne.  Her recipe features Follow Your Heart Vegenaise, Bragg Live Food Products, and Loma Linda Tuno!  Let’s take a look at how she throws together her tuna salad specialty.

Vegan actress, singer, TV host, and comedienne Stephanie Gerard was born in Mexico City. Her mother is from Monterrey, Mexico, and her father, from Cannes, France. Stephanie’s parents moved to the small town of Kamloops, British Columbia, Canada when Stephanie was 6 months old. At age 5 Stephanie started singing, playing the piano and the guitar.

She lived in Canada for 7 years before returning to Mexico where she lived for six additional years before moving several more times. Later on, her parents enrolled her in a regular school where she took acting, ballet, and hip hop classes. Stephanie speaks five languages: Spanish, English, French, German, and Italian, and has lived in France, Germany, Switzerland, and since 2012 in Los Angeles, California.

Stephanie’s love for music developed as a baby listening to The Beatles. As a child, she sang in the church choir. Singing and performing on big stages became her main focus. Stephanie pursued her musical training in every country she lived in by attending music schools and receiving private lessons. Her training in song includes teachers such as Enrique Del Olmo, Alfredo Algarín, Erick Guecha, and the amazing vocal coach Roger Love in Los Angeles.

For piano, guitar, and upright bass training, she attended the Fermatta School in Mexico City and trained with Jorge Guerra, Sadoc García, and Gary Nestruk.

Professional training in theater includes working with Virginia Fabregas as well as a year in France at Cours Florent as well as 3 years of Dramatic Arts at the Educational Center of Arts (CEA-Televisa) in Mexico City. She is also trained to do trapeze, aerial silks, and contortion as well as yoga. While living in Mexico she reached a limit to where her abilities could take her in that country. By that time she had already toured all over Mexico and Latin America, recorded 9 albums including a Beatles tribute where she received congratulations from Sir Paul McCartney. She released a couple of songs on Spotify that she co-wrote with the award-winning songwriter Luciano Luna with Mariachi.

Television credits include La Madrastra, Derbez en Cuando opposite Eugenio Derbez. Film credits include Sinverguenzas, Pecado Mortal directed by Alvaro Curiel (Mujeres Asesinas) where she played the lead with singer Julio Reyes, Assassin X (Sony Pictures), In Da Cut (NBC Universal), and the movie Plan V, (Videocine/No Dancing Today) released in over 1200 theaters in Mexico on August 17th, 2018. She also acted in theater for a season from August 24th till October 14th, 2018 in a play called “Desafecto”, a Nirvana Theater production for Hollywood in Spanish. She has hosted multiple Tv Shows including “Tengo Talento Mucho Talento”, “El Mameluco”, “Buenos Dias Familia” in Estrella Media for National Tv, and the Entertainment Morning TV Show “En Vivo” from Monday through Friday live at 7 am.

Wow, what an amazing and talented young woman.  We are thrilled she took the time to share with us one of her go-to vegan recipes.  So let’s see how easy it is to make this vegan tuna salad.

Vegan Tuna Salad Made In Minutes

This vegan tuna salad is literally the easiest to throw together.  You basically just add all the ingredients to a bowl and mix it up.  Stéphanie uses rice in her recipe, which is a unique ingredient for this dish, but it adds great texture.  Use crackers to scoop and eat your salad, or just eat it by the spoonful.  I can also imagine tossing it into a pita or between a couple of slices of bread to make a tasty sandwich.  However you choose to eat this tuna salad, it will be delicious. 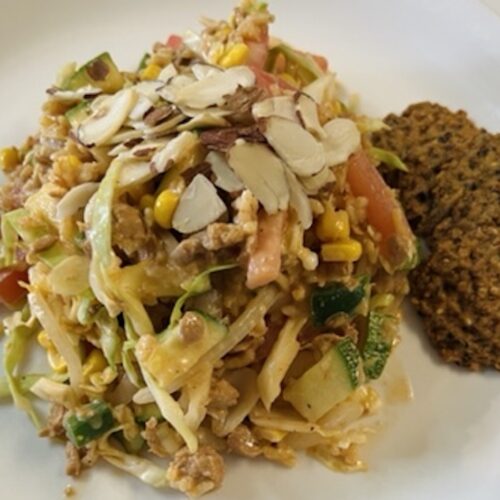 An easy meal to throw together in minutes. Eat it plain or between two slices of bread.
Print Recipe Pin Recipe
Course Lunch
Cuisine American

Get Your Vegan Tuna Salad On!

What a fun episode of #LunchBreakLIVE where we learned how to make a simple yet flavorful lunch!  Vegan tuna salad is a great option when you don’t have a lot of time to cook an extensive recipe.  Give it a try and let us know how you liked it.  Take a photo of your finished dish and tag @UnChained_TV on Instagram.  Looking for other simple plant-based recipes to cook up?  Stop by the #LunchBreakLIVE page, where we have a ton to choose from.  Until next time…keep cookin’!