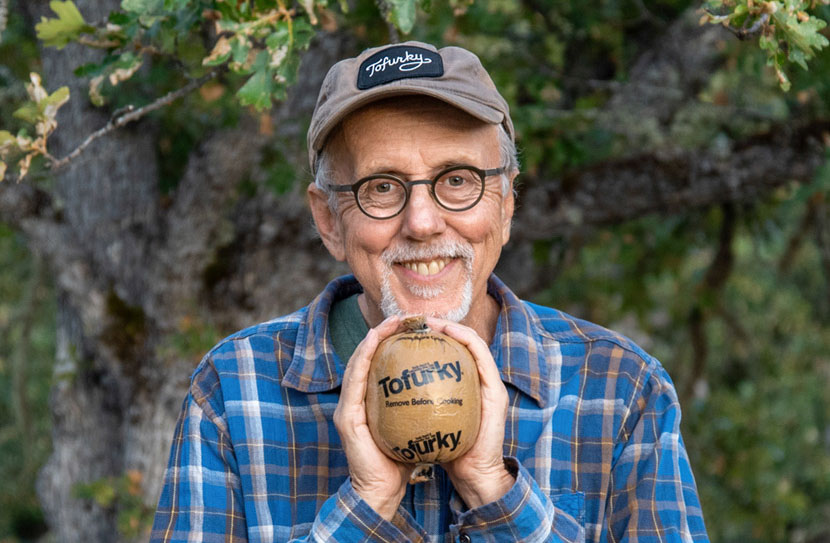 In Search of the Wild Tofurky!

Have you ever wondered how a business misfit could pioneer plant-based foods before they were cool? Now, you can find out from Tofurky’s Founder Seth Tibbott. No, I am not being rude in describing him as a misfit. I am using his own words from the subtitle of his fascinating new autobiography In Search of the Wild Tofurky!

There are many plant-based meat substitutes, and then there is… Tofurky. This vegan alternative to turkey has become a symbol of the plant-based lifestyle. It’s the vegan option that dared to stand its ground in the most traditional American  ritual — Thanksgiving— and win on many tables as an affordable, delicious, climate-friendly, cholesterol-free, cruelty-free alternative.

But how did Seth Tibbott do it?  In Search of the Wild Tofurky offers up a wild tale of business triumph: how a tree-living hippie with no business training grew a $2,500 startup into a global brand that’s made history. Order his book and read this inspiring, page-turning epic.  UnchainedTV’s Jane Velez-Mitchell recently interviewed Seth about his memoir. Click below to watch the interview.

Seth’s journey started a long time ago, in Oregon:

“It really started in 1972 when I read the amazing book by Frances Moore Lappé called ‘Diet for a Small Planet.’ It pointed out the inefficiency of sending grains through animals that you could feed directly to people… and get a 16 to one efficiency when you did that. So, I became a vegetarian.”

“I started reading the books coming out of a place called ‘The Farm’ in Tennessee. It was doing groundbreaking work with soy products. They had 1,200 hippies living on 1,600 acres of land, and I went there. One of the foods I discovered there was tempeh, which is this amazing Indonesian fermented soy product. I just fell in love with it.”

“Nobody was making really good tempeh in the Portland area. So, I started making tempeh in this little food Co-op that I loved. I would go in there at 4:00 o’clock and I brought my pots and pans. I invested 2,500 bucks and I could make 100 pounds of tempeh in a night. It was an 8-hour shift. I would get in my little car the next day and drive it all around to the natural food stores in Portland — which today, of course, is a vegan Mecca. But, back then, nobody knew what tempeh was, so I had a long-haul while losing money with tempeh.”

Seth explains how Tofurky came around:

“The whole concept came out of a lot of failed Thanksgiving personal experiences. We had a gluten roast you couldn’t cut with a chainsaw. We had a stuffed pumpkin that collapsed in the oven. And then, in 1994, I met with my friend Hans Wrobel who was making these stuffed tofu roasts. They were just mashing up tofu and putting it in a colander that was lined with a cheesecloth… and you would just baste it and bake it in the oven… I said: we’re going to market this under the name Tofurky.”

Seth then founded Turtle Island Foods (now trading at least $50 million). From day one Tofurky captured the imagination of vegans and non-vegans alike.

“The day Tofurky started selling, the New Yorker had a full-page cartoon about ‘the rock hard Thanksgiving tofu turkey dinner.’  And it was all a joke. But it wasn’t a joke. People were buying it.”

Today, the possibility of millions of turkeys no longer being born to a life of misery is in reach:

“I just read a recent 2019 study where they called up 1050 Americans and they asked: ‘would you consider spending Thanksgiving where you do not eat a turkey?’ And 30% of Americans in that poll said ‘yes’…  If we could just convince those 30% of Americans to follow through in that pledge, that would save 20 million turkeys.”

There are now sanctuaries that hold ceremonies to feed rescued turkeys cranberries and pumpkin pies.

Seth’s business is more of a mission.  Here are a few of his observations.

“The portal to the human heart is the taste of food. People want to enjoy their food.”

“Thanksgiving is a very special time because it’s a food holiday. We all sit down together and talk about what everybody is eating. Tofurky has been a vehicle to spark that conversation and get people thinking about what — or who — they are eating.”

“Tofurky, in 1995, went into the American culture deeper than any meat alternative had gone before. It was largely an effect of media. They just went crazy for this.”

There are many ways you can cook Tofurky for Thanksgiving. They are all there on the tofurky.com website for people to see. Seth explains one of the easiest.

“The basic thing you have to remember about Tofurky is that it is already pre-cooked. Just try to heat it up. Just putting a little bit of oil and some herbs on there. I like to put it in a casserole dish with potatoes and carrots and whatever other veggies you have on hand. And then cover it with a lid end just stick it in the oven at 350 for about an hour and 20 minutes. Then, you take it out and, voila! You’re done. Very simple.”

“We are 41 years into this business. As a family-run independent business. That’s been our business model, and this is how we have grown. Without any equity sold outside the family.” -Seth Tibbott, Tofurky’s Founder

What Else Is There Under the Sleeve of Tofurky’s Founder

The future looks great for the Tofurky family.

“Our mission is to expand and keep the brand growing throughout the world. It’s amazing to see what’s going on. This isn’t just a US phenomenon. The world is going vegan crazy right now.”

“We started a new brand which is called moocho.com and moochofoods.com, and this is a (vegan) cheese brand. So, we had been developing cheese for five or six years. Looking for a better melting and shredding cheese. They are made with fava beans”.

And, of course, the final goal is a vegan world.

“Our vision is the vegan world. Right now, even with all this incredible growth, there is still a vast discrepancy between the amount of protein that people are getting from these plant-based meats versus animal-based meats. The average American is still consuming 200 pounds of meat a year from animals.”

But, says Seth, things are changing.

“One tipping point would be when we hit 51% market share of the protein market. I think that, within the next 40 years, that tipping point will come.

“We all need to look for the loving place in our hearts and connect with people. And, not be shaming people, but finding ways, through love and positivity — and beautiful, tasty vegan food — to change their hearts and to change the world.” -Seth Tibbott, Tofurky’s Founder

Seth’s autobiography is on sale now.