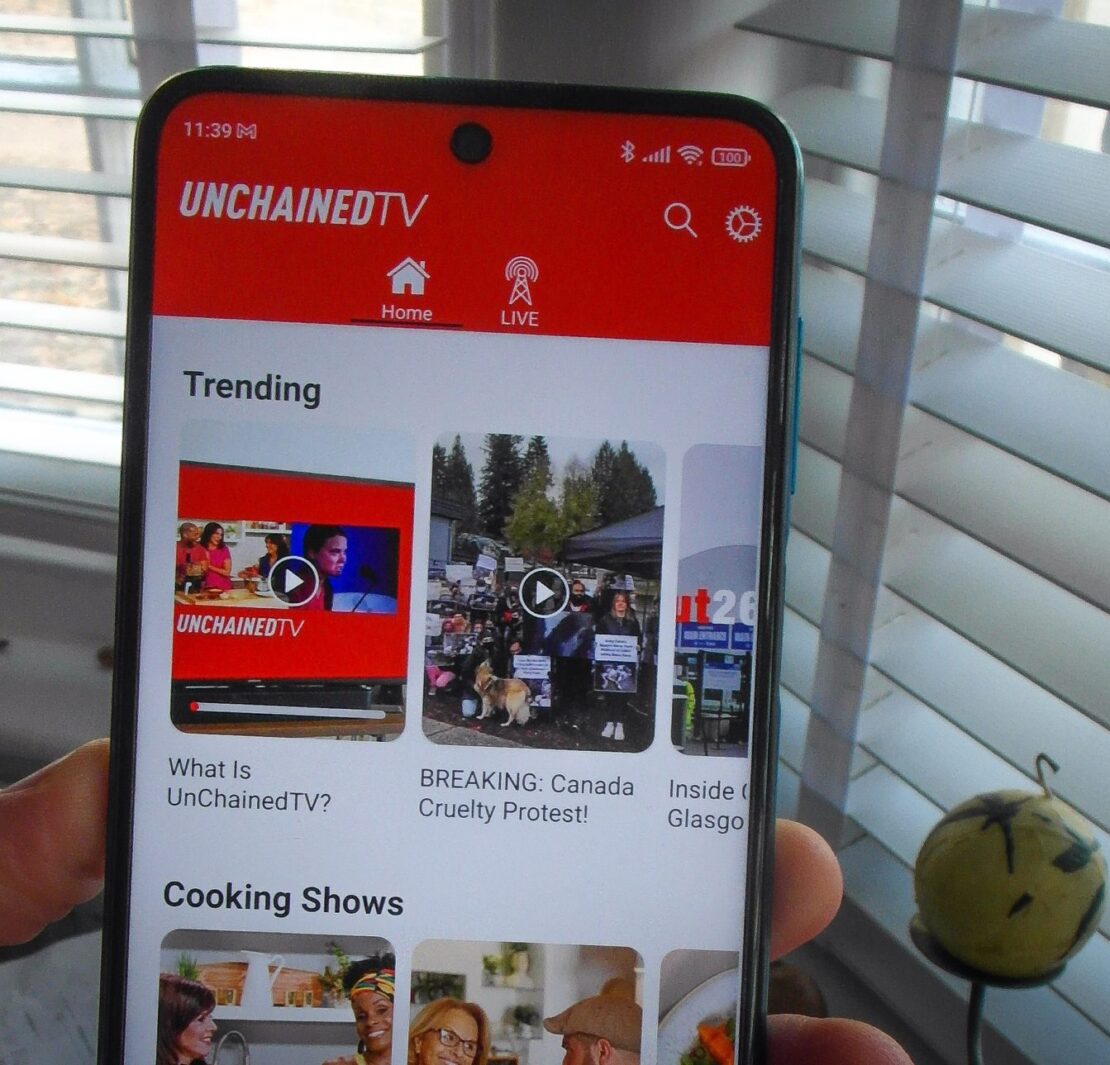 Our New Vegan Network is Totally Free to Watch!

Welcome to UnchainedTV. This website is the hub for our brand new television network that offers hundreds of documentaries, cooking shows, talks shows, music videos and more! It’s 100% plant-based, climate-friendly and cruelty-free!  You can watch it right now from your laptop! Just click here!

Mainstream media is dropping the ball, virtually ignoring the biggest crisis the human race has ever faced: climate apocalypse. We are breaking irreversible boundaries and racing towards a point of no return.  Yet, crucial issues regarding this unfolding catastrophe are ignored because advertiser-based media is controlled by its advertisers, the very entities creating the problem.

We are not beholden to advertisers. We are a non-profit news network on a mission to tell the truth and get people around the world the information they need to change their lifestyles. We can no longer wait for governments, which are also controlled by those very same industries, to act. We have been told individuals are relatively powerless to fix this. That is a lie. Together, we can pull ourselves back from the brink of climate devastation. So… let’s do this! Be a part of it! Watch our content! Share it out! Click the social media links on this story to share it out!

WATCH UNCHAINEDTV ON YOUR PHONE!

UnchainedTV comes in the form of an APP. You can go to your iPhone or Android phone’s APP store, type in UnchainedTV and download it right now. It’s free and you don’t even have to sign up or sign in. Just hit download!

WATCH UNCHAINEDTV ON YOUR TV!

You can also watch UnchainedTV on your television! If you have a Roku device, just click on Streaming Channels, then – in the search bar- type in UnchainedTV. It should come up after the first 4 or 5 letters.

It’s also easy to download on an Apple TV device, an Amazon Fire Stick or a new LG or Samsung Smart TV. Click here for instructions on how to download this free streaming network from whatever device you have!

TOGETHER, WE CAN GET THIS INFORMATION OUT!

UnChainedTV is the longtime dream of award-winning journalist and New York Times bestselling author Jane Velez-Mitchell, who is the founder of this website’s non-profit.  For six years, Jane hosted her own show on CNN Headline News, aka HLN. Previously, she worked in syndicated television and, prior to that, anchored in local television news at KCAL-TV in Los Angeles and WCBS-TV in New York. All that to say… she’s watched the best in the business run the largest news networks in the world. And, UnchainedTV is blessed to have an amazing team of bookers, content creators, hosts, social media influencers, volunteers and producers.

UnchainedTV is powered by dozens of volunteer journalists and content creators around the world. Click here if you would like to join the team. We are also currently accepting submissions from those who have created documentaries, scripted series, cooking shows, travel shows, talk shows, music videos or other video content with a climate-friendly, plant-based theme, including subjects such as conservation, food justice, animal rights, health and the intersectionality of these issues with other social justice movements. Email Jane@unchainedtv.com for details on how to submit your work for streaming on our network.

What’s The Most Searched Word on Roku?

FREE. Yes, that’s what the cord-cutters and cord-nevers are looking for: FREE CONTENT TO WATCH! UnChainedTV is Free to watch all around the world. Created in conjunction with Emmy award-winning producer Eamonn McCrystal of Inspired., the network has plans for live coverage of exciting events like VegFests and vegan fashion shows. There’s even the possibility of an original scripted series down the road.  Have you downloaded the Unchained TV app yet?

When Jane told me about the launch, I immediately downloaded the free app on my phone. I was very impressed. Because I am a writer for her non-profit’s website, I already knew that the organization reports on a wide range of topics, from the climate crisis to the health crisis to delicious vegan recipes. This APP also has a wide range of content: vegan and animal rights breaking news, documentaries, vegan cooking shows, music videos, plant-based business profiles, fitness, and talk shows.

But, I did not expect the app to be so comprehensive and easy to use. You have two options. The home section offers all the videos from which to choose at your leisure.   The live option offers content constantly streamed “as live.”  All the videos are ready to watch at the tap of your finger, organized into useful topics: Trending, Cooking Shows, News, Documentaries, Mini Docs, Getting Fit, Talk Shows, Plant-Based Business Hour, Events, and Music.

You can Watch Many Documentaries with the UnchainedTV App

As a freelance writer on vegan and animal issues, I try to keep up to date on our movement’s films. And, yet, I found so many documentaries in the UnchainedTV APP that I had not seen.

For instance, the first in the list of documentaries I saw was Give Me Shelter, Katie Cleary’s movie just published on the channel. Featuring many beautifully shot interviews with experts, the movie exposes the underground black market trade of wild and exotic animals and features Hollywood icon Tippi Hedren, an animal activist who is also famous for starring in The Birds, among many classic films.

Also, it was great to watch the young vegan activist Genesis Butler getting inspired by the life of the late American labor leader and civil rights activist Cesar Chavez. It turns out that they are related. You can watch this short documentary titled Cesar Chavez: Respect for All.

Using the UnChainedTV APP, you can now also watch the multi-awarded documentary Countdown to Year Zero. Jane Velez-Mitchell produced and directed this film, shot and edited by Jeff Adams of VeganLinked.  It’s a wake-up call about how the global economy has less than a decade to transition to a plant-based system.

And I found classics too. Vegucated, the 2011 guerrilla-style documentary that follows three meat and cheese-loving New Yorkers who agree to adopt a vegan diet for six weeks. And, of course, the legendary Earthlings (10th Anniversary edition). The poignant documentary, narrated by Oscar-winning actor Joaquin Phoenix, is credited for being the trigger that turned many people vegan. I remember how there was a time where animal rights activists commonly greeted each other with “have you watched Earthlings yet?” Well, now with UnchainedTV, everyone can watch it for free.

News and Events Can Also be Watched in the UnchainedTV App

Animal rights protests are hardly ever reported on by mainstream media.  Now, UnChainedTV brings you the breaking news from the streets, from anti-fur protests to vigils, from VegFests to new vegan restaurant openings.

It’s all there, in chronological order, for you to get up to date. For instance, I watched a dramatic Cube of Truth style demo at the Virginia Beach oceanfront, followed by an animal rights protest in Canada and a series of protests and speeches in Glasgow during the COP26 climate summit.  There was also an interview with Eric Adams, the new vegan mayor of New York City, plus an anti-vivisection march.

For a movement so reliant on grassroots activism, this is an informative tool to find out what is going on out there. But, it’s also a nice way to remotely participate in small events all over the world. By watching the videos, and listening to the inspiring speeches, you are supporting courageous animal activists. Sometimes, only a handful of onlookers see these protests in real life. But, thanks to the UnchainedTV app, many average Americans will now be exposed to this information.

Interested in learning new plant-based recipes? Looking for music created by vegan artists? Want to fill the time listening to interesting debates and interviews on vegan topics?  UnchainedTV features a great deal of light content of this kind too.

You can watch the latest Plant-Based Business Hour interview. Elizabeth Alfano interviews the world’s top vegan entrepreneurs. Discover the latest in vegtech. I have written accompanying articles about many of these informative interviews. They are always very illuminating and make me feel that we are getting closer to a more compassionate world and hitting the vegan tipping point.

UnChainedTV is really simple to download. Just go to the APP store on your iPhone and type it in, or go to Google Play for Android phones. You don’t have to give your email. And, it’s totally free. On ROKU, type in UnChainedTV in the Channel Store. On Amazon Fire Stick, go to the APP search box and type it in. It is also available on LG Smart TVs with webOS.

The app is free and all the content is free. So, get it now!

Over The Top Loaded Baked Potato