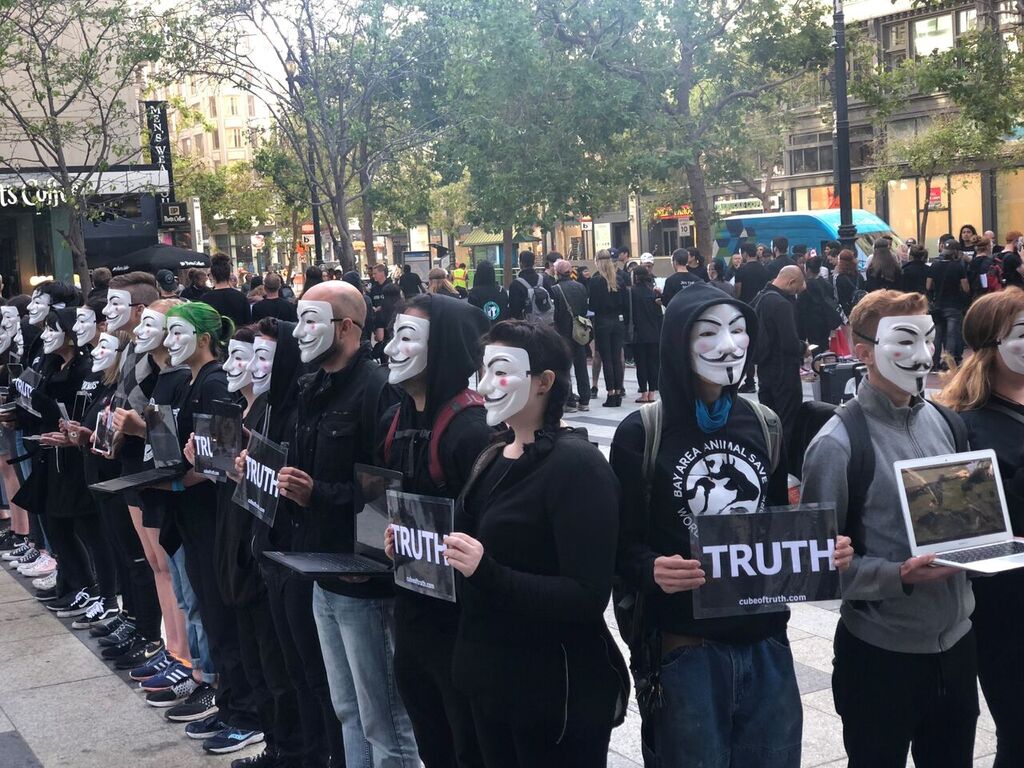 #JaneUnChained was LIVE in San Francisco, California  2 months ago, at the largest Cube of Truth event ever, organized by Anonymous for the Voiceless (AV). It peacefully confronts the public with the horror that is animal agriculture! Paul Bashir, the co-founder and director, kicks off the wild day! Wait for it! Dramatic finale! #ALC2018 JaneUnChained.com.
About 53 different animal rights groups got together to do the largest Cube of Truth in history with approximately 1000 activists in attendance! Thirteen cubes in total organized into one giant cube and 12 smaller cubes. Activists even hung a banner that said “End Speciesism” over the balcony right below the Macy’s department store sign, which challenges the department store to stop selling fur and animal skins. The AV organizers did such an amazing job of organizing all these activists for this huge event! It’s truly amazing what can be accomplished when the animal rights community comes together to make history!
Anastasia, the organizer of AV in Berkeley, explains that the Cube of Truth is a “static art performance.” Activists use the screens with videos of animal cruelty in order to draw in passerbys so they can initiate a conversation about animal rights by educational means. The activists holding the screens wear masks in order to draw attention and at the same time the mask makes it less intimidating for someone who stops to watch the videos, versus making eye contact with them while they watch.  It is a performance with a plea for change for the animals who are the victims of the worldwide agricultural industry. Events like these shed the light on the atrocities of the animal agriculture industry, and they invite people to be enlightened so they can make the connection. After connecting they will undoubtedly think of changing their ways. The more people who change, the more hope that practices like factory farming will end sooner so the animals involved stop suffering.
Anonymous for the Voiceless was established in April of 2016, and they are an animal rights organization who’s specialty is street activism. They have had over 3,996 demonstrations in 650 cities around the world and they have convinced at least 214,493 people to take veganism seriously. Paul Bashir, co-founder of Anonymous for the Voiceless is heavily involved in the activist community and he even attended two pig vigils held in Los Angeles recently, organized by the Los Angeles Animal Save and the Animal Alliance Network groups. Please support real animal rights warriors like the 1000 activists we saw here that day, and join Anonymous for the Voiceless today!!!
Earthling Ed said it perfectly, “You can stand on the right side of history or the wrong side of history, but you have to decide today which side of history you are going to stand on.”
Please visit the AV website and Facebook page for more details of how to get involved and to possibly organize a Cube of Truth in your area!
http://anonymousforthevoiceless.org/

Summit to Switch from Animal to Veganic Farming