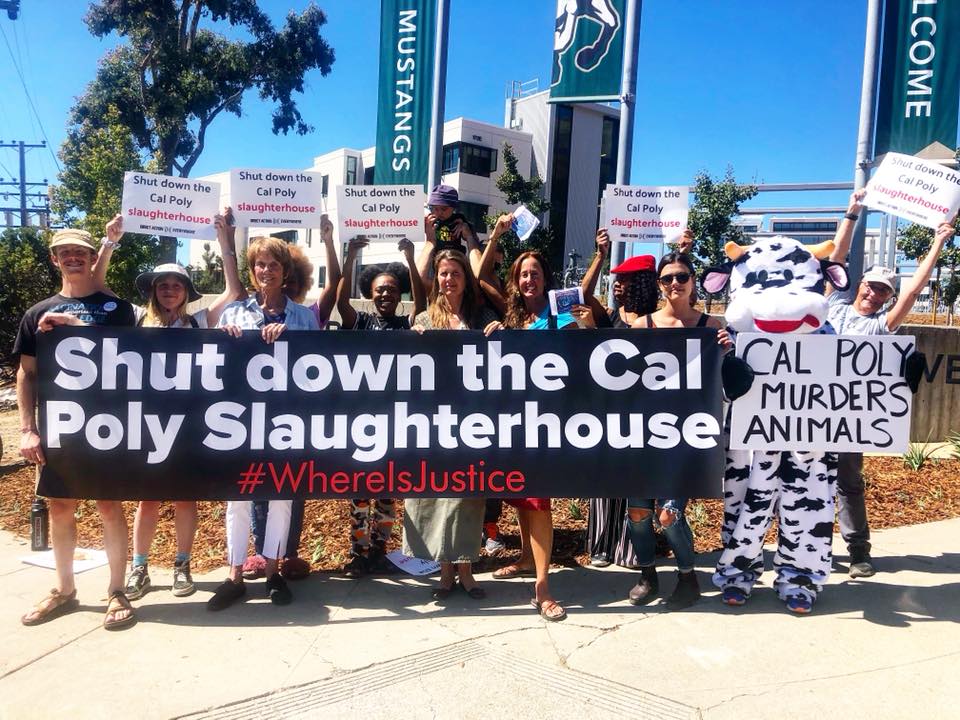 #JaneUnChained is LIVE at California Polytechnic State University (Cal Poly), San Luis Obispo, California, as animal activists and Cal Poly students demand the campus slaughterhouse be shut down, arguing teaching students how to kill is teaching and encouraging violence. University officials are invited on any time to respond!
Young activists raise their voices this day for the animals in hope Cal Poly will shutdown their campus slaughterhouse. They explain that killing animals is not acceptable and curriculum teaching students how to kill animals has not place in education. We live in a society that values one species lives over another. We also live in a society of normalized violence. These students are asking for change. They do not want this slaughterhouse on their campus or anywhere. Parents and students should decide whether it is acceptable to teach students to kill creatures as sentient as we are as part of a curriculum. It’s time to demand more of our universities.  Universities are responsible for education and that should include teaching their students responsibly. Meat is unsustainable for the environment, unhealthy, and cruel.
They are asking Cal Poly to put a stop to the slaughter, ending the advertisement and sales of “fresh” meat on their campus. Zoe Rosenberg the Direct Action Everywhere (DXE) activist was arrested in April for trying to stop the slaughter of a cow they named “Justice.” She says it is awful that people who speak up and try to protect animals are arrested and thrown into jail cells. She believes as long as we don’t give up and keep fighting, there is hope for animal liberation soon!
Activists continue their protest and chant demands to Cal Poly to stop slaughtering animals. “Stop the slaughter, stop the pain.” “Where is Justice?” Hopefully one day, thanks to the actions of individuals like these, the slaughterhouse on this campus will be closed down. Hopefully other campuses will follow suit if they have similar programs. Cruelty will have no place in education or in our world if we all demand change.
Any representatives or students of  California Polytechnic State University (Cal Poly) are welcome to respond at any time.
More information about the J and G Lau Family Meat Processing Center on the Cal Poly Campus.
See Also
Animal Experimentation

“If You Don’t Go Vegan I’m Not Going To Have A Future” Says Vegan Evan!