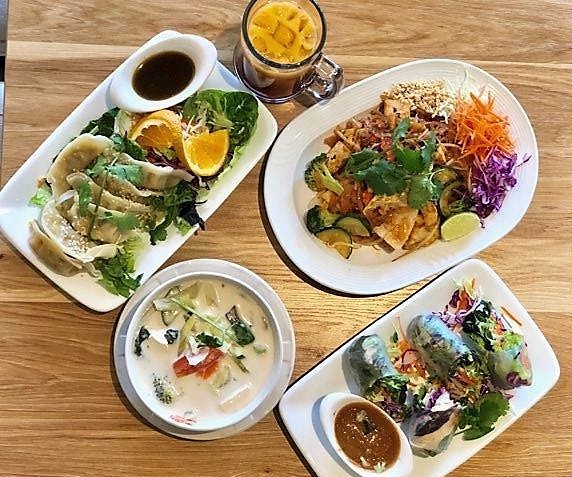 Thai Vegan II on #LunchbreakLIVE in the heart of the Santa Monica Medical Center. Thai Vegan II provides a full plant based, vegan menu to the hospital’s medical staff, its patients, interns, as well as the local community.  Everyone should eat a plant-based diet but if a person is sick, a plant-based just might help them with their ailments. Many doctors are recommending that their patients transition to vegan diets in order to help their conditions. Restaurants like these make it possible for patients to have a great plant-based restaurant as an option to eat nearby their doctor’s office.

Patrizia loves Thai food and she already has her Thai iced tea as she awaits the dishes she ordered. The menu has a multitude of dishes and they are all vegan! The pictures on the menu will make you want to order one of each! Patrizia starts off with a traditional Tom Kah coconut soup that looks amazingly creamy and follows it with some fresh veggie rolls. This place has super fresh vegetables and everything is bursting with flavor! Next Patrizia has the steamed dumplings and follows that with their most popular dish, the Pad Thai noodles, for her main course. Whoever says you can’t enjoy great Thai food after going vegan, needs to try this place!

See their great ratings on Yelp.com

These Vegan Scones Are A Dream Come True

Good Times and Great Eats at the Lowcountry Vegfest!