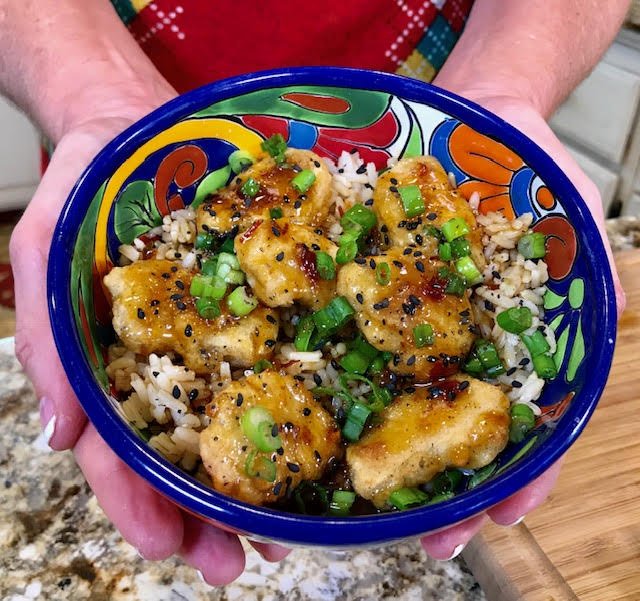 Erin Riley-Carrasco, PETA (People for the Ethical Treatment of Animals)’s Sexiest Vegan Over 50 makes a yummy, quick and easy Mandarin Orange Crispy Chick’n Bowl with a tasty sauce on Brown Rice on today’s #SaturdaySnackdown! All under $10.00!

Erin explains that many people are weary of Gardein products, especially if they are trying to stick to a whole foods diet. Erin also tries to stick to a whole foods plant-based diet at home. But every once in a while with teenage kids in her household, she makes them something out of the ordinary like this Mandarin orange crispy chick’n. Erin adds that there are several nutritious ingredients in the Gardein crispy chick’n like ancient grains, quinoa, and organic soy protein.
Erin jazzes up this package of chick’n with her own flavorful touches. You can also customize your crispy chick’n to your tastes. This is a quick and easy affordable recipe to make at home. Make some brown rice beforehand to make it a crispy orange chick’n bowl. This is a fun fast recipe your family and friends are sure to love! Try Erin’s version at home with the recipe below!
Find the nearest location to buy Gardein products!

DIRECTIONS:
– Place vegan chicken pieces on pan and bake in oven at 425 degrees for 15 minutes, turning over once. If using an Air Fryer, cook for 8 minutes