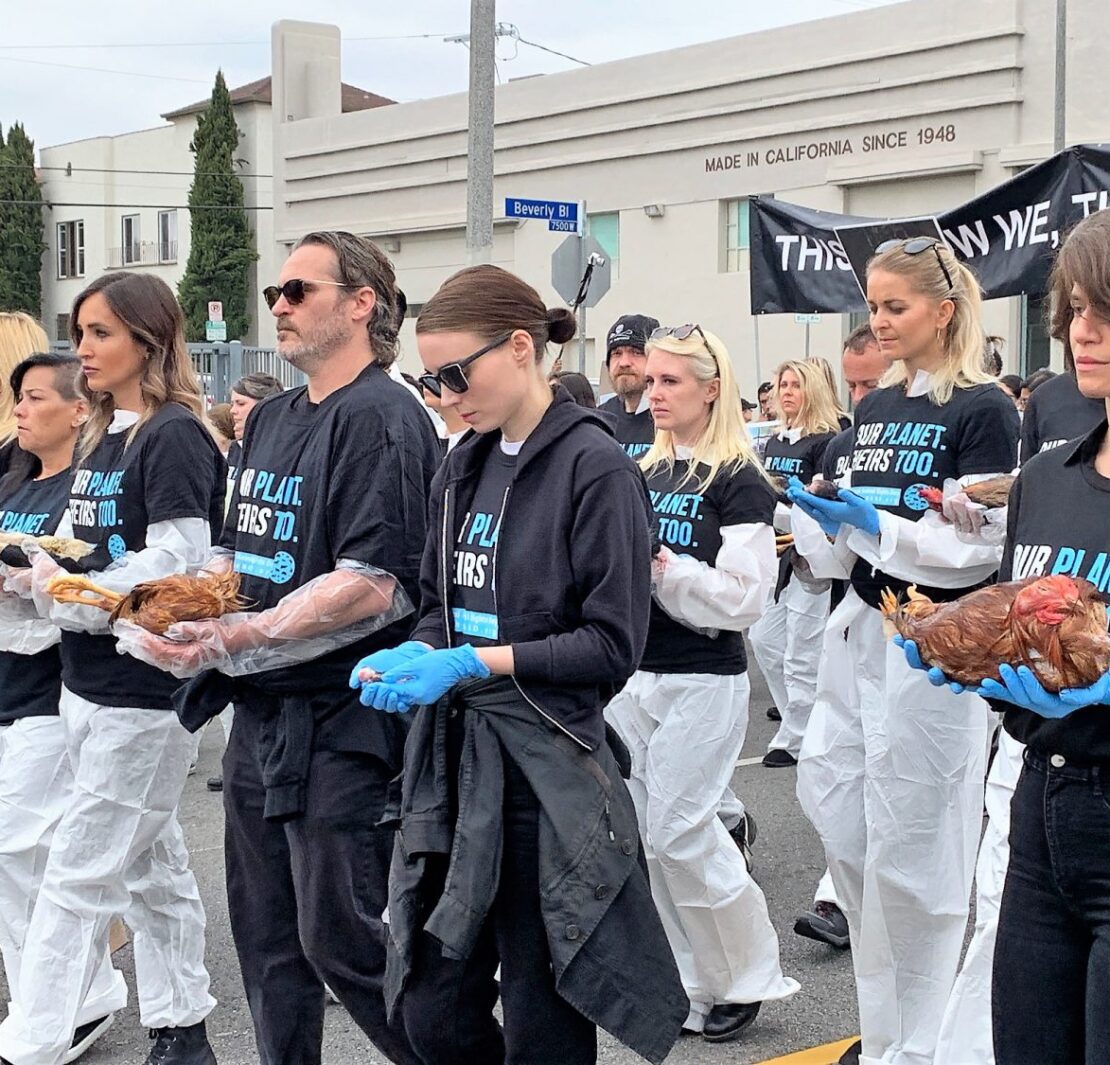 JaneUnchained LIVE at the National Animal Rights Day in Los Angeles, CA. Over a thousand activists, including celebrities Joaquin Phoenix, Rooney Mara, and Earthlings director Shaun Monson are marching and honoring innocent animals by carrying their dead bodies while walking. They’re supporting this event to urge everyone to quit eating and wearing animals and to end all animal exploitation. All those present are standing in solidarity with the animals of our planet who are exploited and killed for food, clothing, experimentation, and entertainment. We are their voice! We have the power to stop this! Please, if you’re not already, Go Vegan for the animals, for your health, and for our planet. The time is now!

National Animal Rights Day known by the acronym NARD was established by the nonprofit “Our Planet. Theirs Too.” in 2011. This day’s events are practiced in several countries worldwide on June 2nd.  JaneUnchained contributors reported from NARD in Los Angeles, New York, Portland, and Berkeley alone. As part of the NARD ceremony, participants hold a funeral procession with the bodies of several species of animals to symbolize the victims of human practices. They also read and sign the Declaration of Animal Rights. The goal is people will participate or observe the event and become aware of their actions so they can change them in order to save other animals from suffering and death. The nonprofit also promotes a vegan lifestyle as part of the change that people can make in their own lives to save countless lives of animals.

This year in Los Angeles NARD held the first march for this event making a historical twist. During the march, activists held the bodies of over a dozen animals, as well as signs displaying animals suffering and pro-animal rights messages. March goers were able to walk in the street to the busy intersection of Beverly Blvd. and Fairfax Ave. There is no doubt the march gained the attention of several people walking or driving by.  We hope that this year’s NARD event leaves a lasting impression on those who participated and or saw the display. Hopefully, it will lead people to align their actions and promote peace and freedom for our fellow sentient creatures.

Huge thanks to the NARD Main Organizers: Aylam Orian, Kim Delgado-King, Christina Ku,  Kirsty Lingman, John Hays, Rob Adams, and Sarrie Collins to name a few who made this event a success!

JaneUnChained is LIVE at the National Animal Rights Day (NARD) event at Pan Pacific Park in Los Angeles California following the silent march down Beverly Boulevard with activists carrying deceased farm animals, domestic animals along with photos of animals exploited for human use. Now we have a memorial service for the deceased animals who were carried in the march.
Lisa Karlan reporting for JaneUnChained New Network.

JaneUnChained is LIVE at the National Animal Rights Day (NARD) event at Pan Pacific Park in Los Angeles California following the silent march down Beverly Boulevard with activists carrying deceased farm animals, domestic animals along its photos of animals exploited for human use. Now Jory Rand from ABC News is our MC for the presentations including Amy Burke, painter, artist, animal lover, and humanitarian who performs Pulse Live Art.  Blooming Fire Band, a brother/sister fronted alternative vegan band from Los Angeles performs their music to inspire bring a voice for mother earth, equality, and justice. Those Annoying Vegans, Ana Valverde and Brian Ruppenkamp, will discuss their activism as co-organizers of the cow and chicken vigils with LA Animal Save. Comedian Sean Hill also graces us with his motivational words. This demonstration was much more than a funeral, it was a celebration to promote change for the sake of all beings. Thank you to all of you who participated and took a stand for our species victims in hopes to end their suffering.

All photos courtesy of Lisa Karlan.