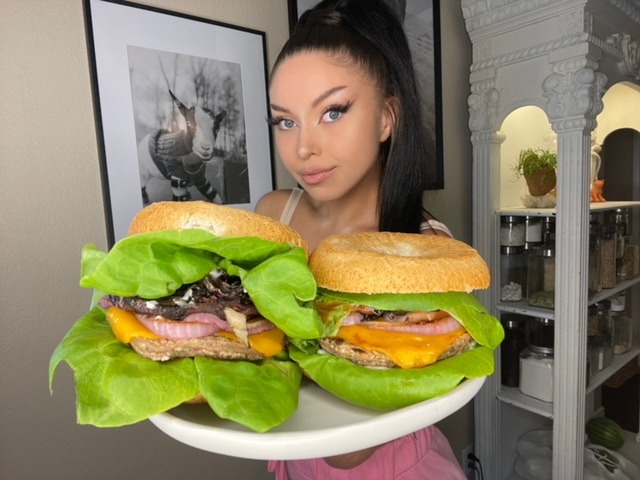 The secret to making astounding vegan mushroom jerky burgers revealed in this episode of #LunchBreakLIVE! Guest chef Sorsha Morava, will show us how to make these decadent delights.  The recipe is simple and the flavor is off the charts.  Let’s see how it is done.

MEDIA MAVEN IN THE VEGAN WORLD

Sorsha Morava is both a human and animal activist, voice actor, health nerd, fitness enthusiast, and a vegan of 10 years for the animals. She’s passionate about using her voice to bring characters to life in voice-over work in both animation and commercial as well as use her voice to be an activist for humans and animals. She’s found a creative outlet on TikTok creating fun videos by finding the humor in veganism, relationships, and that gym life. Along with empowering women and men as well as educating people on the importance of veganism. Her Instagram stories are filled with vegan food, minimal waste tips and tricks, vegan activism, trips to the grocery store, her adorable dogs, and bringing awareness to human rights. Sorsha loves learning and being a better version of herself so that she can help and serve others. Keep up with her on Instagram, TikTok, YouTube, and Facebook for more!

MUSHROOM JERKY ON A BURGER?

Putting mushroom jerky on a burger is super creative and I imagine would taste incredible.  The burger is layered with cheese, lettuce, grilled onions, mayo, BBQ sauce, and of course, mushroom jerky!  There is so much yum to be had in every bite!  Making this burger is so dang easy, pretty much anyone can do it.  It’s all about building the burger with all sorts of flavor via toppings and dressings, and the mushroom jerky adds some extra flair to every bite.  Give it a try. 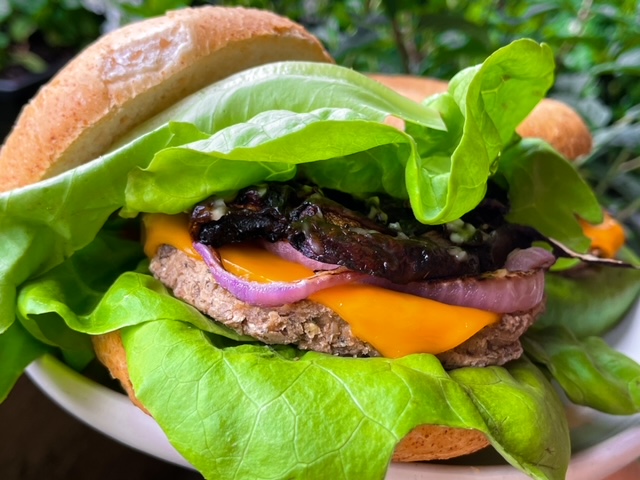 Looking for a quick, flavorful vegan burger to throw together? This mushroom jerky BBQ burger is the bomb and will satisfy you with every messy bite!
Print Recipe Pin Recipe
Course Dinner, Lunch
Cuisine American
Servings 1 burger

THANKS FOR JOINING US FOR LUNCH!

There is nothing like a good vegan burger to fill your belly!  This one is awesome with its unique twist, adding mushroom jerky in the mix.  I can imagine the flavor is incredible, dripping in BBQ sauce, vegan mayo, and all the fixin’s.  Give it a try and let us know how you liked it.  If you are looking for other plant-based meal ideas, be sure to stop by the #LunchBreakLIVE page where we have a ton of recipes to sift through and try.  Until next time, keep cookin’!