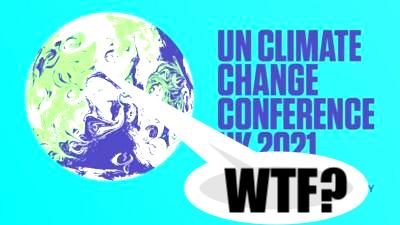 Can you say Cop26 Cop-Out? Or maybe it’s #CopOut26! We don’t often quote this extensively from another publication, but this insightful Washington Post story deserves a chunky quote. It notes, “The menu in Glasgow is getting skewered for the apparent carbon trail some dishes have left behind. How do people know? It’s right there where you order. Listed next to choices of meat, dairy and fish — and vegetarian and vegan options — is the carbon footprint figure of each meal. Want a Scottish beef burger? It’s unclear what that will set you back calorie-wise. And who’s to say if you’ll get darting glares from vegans dining nearby. But the burger had been calculated to have a 3.9kg Co2e rating (more on the numbers in a second). That’s much higher than, say, the Scottish beetroot and broccoli salad (0.2)…”

One recipe featured Haggis, which is defined this way. “Haggis, the national dish of Scotland, a type of pudding composed of the liver, heart, and lungs of a sheep (or other animal), minced and mixed with beef or mutton suet and oatmeal and seasoned with onion, cayenne pepper, and other spices.” That is so offal… I mean… awful.

THE PROSECUTION RESTS, YOUR HONOR!

As the Washington Post article cleverly points out, the very act of listing the carbon footprint next to each dish actually highlights and proves that meat dishes have a much higher carbon footprint than vegan dishes. In other words, it was like a vegan was prosecuting the case against meat and placed a series of posters in front of the jury to prove that meat is the climate change culprit. Open and shut case. But, the real idiocy was then describing that menu as “A Recipe for Change.” Wow! How about calling it “A Recipe for Disaster.” Literally.

Meanwhile, at #COP26Glasgow, here’s the best speech yet and its main point is: food is climate. We can reverse climate change with diet change. Dr. Sailesh Rao, of Climate Healers, delivered a powerful speech at the global climate summit in Glasgow, Scotland. It was written by popular actor/animal activist Peter Egan whom you may know from Downton Abbey and many other television shows and films. Despite his fame, Egan could not get into the conference, so Dr. Rao delivered his speech for him. Here is the main part of it. Powerful.

The REALLY Inconvenient Truth!  Al Gore Asked to Sign the Plant Based Treaty!

#UnChainedNews was also LIVE with a panel from Glasgow, Scotland. And, we discussed how this craven move to serve meat, fish and dairy boomeranged and turned the whole summit into a punchline. One hilarious meme compared the COP26 menu to a drunk vowing to give up alcohol by 2030! Anita Krajnc of The Save Movement and the Plant Based Treaty is joined by Lia Phillips of the Plant Based Treaty, Dr. Sailesh Rao of Climate Healers, youth activist Vegan Evan and his mom Shannon Blair, our COP26 correspondent Jill Carnegie and moi (Jane Velez-Mitchell) moderating.

This is the book that Dr. Sailesh Rao was able to hand to former Vice President Al Gore. Food Is Climate lays out why a global shift to a plant-based food system can reverse climate change and save us from an environmental apocalypse.

Vegan Tamales Just In Time For The Holidays!