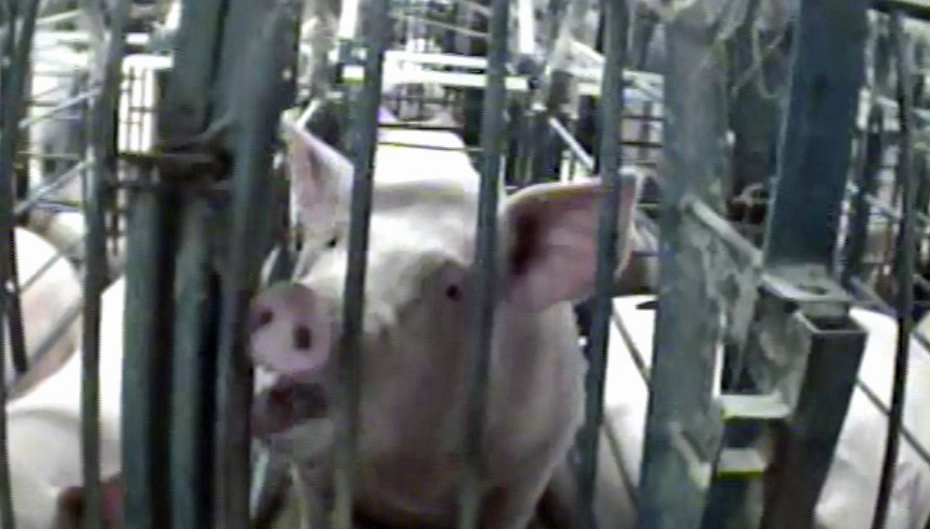 URGENT! ACT NOW! Animal lovers in America, we need you to take action NOW! PLEASE Contact your 2 U.S. Senators and your member of Congress immediately and say: VOTE NO on the EATS ACT! Make sure to give them the bill numbers: Bill H.R 4999 for the House and S.2619 for the Senate. Mercy for Animals has a link to make it easy here.   In Defense of Animals has also issued this call to action! Click here to sign. It’s quick and easy. IDAUSA says 5,000 of its supporters have signed, thereby sending a message to their legislators. This and more is needed from everyone who loves animals!

The EATS ACT is a dangerous new piece of Big Ag legislation barreling through Congress. It aims to undo legal protections for farmed animals. With its friendly-sounding name, it’s trying to pass itself off as some healthy-eating bill. It’s NOT!  If it passes, it will be a nightmare for animals. The anti-animal EATS ACT would spell continued torture for billions of factory-farmed animals whose hope for some relief in their miserable lives will vanish.

If You Really Love Animals: Call, Email, Share out NOW!

Mercy for Animals has made it SO easy for you to send the message to your U.S. Senators & representatives in Congress. Just CLICK HERE NOW!

Los Angeles City Councilmember Paul Koretz is always championing animal causes, like the ban of fur in L.A. and his very important Wildlife Corridor’s Program. Now, he’s sounding the alarm to warn the animal rights community about the deceptive anti-animal EATS ACT. He explained to Jane Velez-Mitchell why this bill is so sneaky:

“The bill is made to sound benign, to make it easier for people to get bacon on their tables. People don’t realize it would directly contradict all the anti-cruelty legislation, which in California the overwhelming majority of voters passed.”

KORETZ IS PUSHING A RESOLUTION CONDEMNING THE EATS ACT!

Councilmember Paul Koretz is so worried, he’s even introduced a resolution in L.A. Council to oppose and denounce The EATS ACT. He is asking L.A. citizens to call/email their councilmembers by clicking here and urge them to support resolution!

“We have a resolution that I introduced in opposition to the EATS Act. I think everybody in Council is likely to support my resolution. Our greatest danger is just the slow bureaucratic pace in which such resolutions move through the process. So, if Council members are hearing from you, they are more likely to make sure that this moves quickly. And I think the impact of the second-largest city and the country opposing this legislation will certainly make a number of folks in Congress take notice.”

The EATS ACT Will Wipe Out Farmed Animal Protections!

The EATS ACT stated purpose is: “to prevent States and local jurisdictions from interfering with the production and distribution of agricultural products in interstate commerce, and for other purposes.”

This bill aims to crush all the hard-won victories animal lovers have achieved by passing laws that improve the living conditions of factory-farmed animals. If passed, it would nullify some states’ animal protection, such as California’s Prop 12, which is supposed to go into law at the start of 2022!  This progressive law bans hideously cruel pig gestation crates, veal crates, and hen battery cages. If passed, the EATS Act will roll back farm animal protections across the U.S.

More than twelve states have passed legislation to protect animals from some of the most egregious cruelty in the industry. In November 2018, 63% of Californian voters approved Prop 12 (the ballot entitled Farm Animal Confinement Initiative). Proposed by many animal non-profits, it establishes minimum space requirements for confining certain farm animals. It also prohibits sales of meat and egg products from animals confined in a noncomplying manner. Prop 12 survived several legal challenges by the National Pork Producers and the American Farm Bureau Federation. It is set to be fully implemented next year.

However, the meat and dairy industry has not given up. Their attempts to stop Prop 12 failed in the courts. So, critics say they are now trying to sabotage Prop 12 in Congress. Right now, the deceptive Anti-Animal EATS ACT is trying to slip its way through congress unnoticed.

Every animal lover should call and email their representatives warning them about this bill and urging them to vote NO! Councilmember Koretz explains why this is so important:

“Unless you let your members of Congress or senators know that it’s not something benign, they may not realize. We really want to get their attention.”

“It’s very important. I could tell you, as someone that’s held several different levels of government positions, that what really impacts you is to hear from your constituents in large numbers. And if you weren’t aware of the bill, it makes you think and look, and say: ‘Oh my gosh, I can’t believe this is actually before us, and I need to get cooking too’. Otherwise, it could even be voted on by anti-cruelty members of Congress that aren’t paying that much attention, when there are thousands of pieces of legislation to track.”

If You Really Love Animals: Call, Email, Share out NOW!

Your task is simple: click now to go to the Congress and Senate websites, enter your zip code to find your representatives in both. Then call them and email them!

We Can’t Let This Nightmare Legislation Become Law! We Must Act NOW!

In the words of Mercy for Animals: “The Bill threatens the most basic protections for farmed animals and was just introduced in Congress.  The act is designed to wipe out existing state laws that ban the cruel confinement of egg-laying hens, mother pigs, and baby calves used for veal. If passed, it could also destroy hundreds of other protections for animals and people.”

“If everybody that gets this message not only makes the call themselves but ask their friends that care about animals to do the same, I think we can have a huge impact on this.” -L.A. Councilmember Paul Koretz