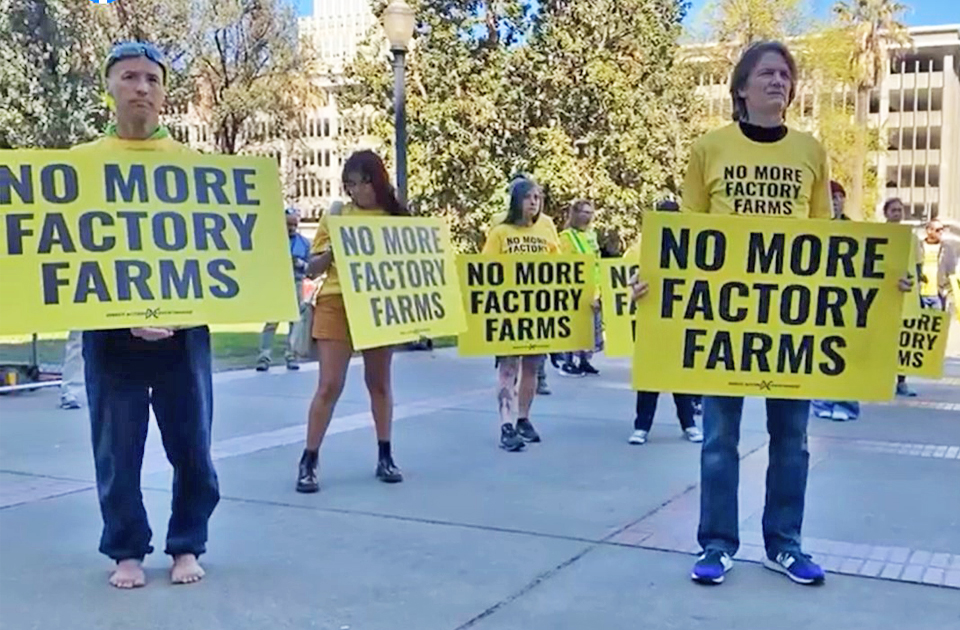 A new bill (AB-2764) would place a moratorium on the construction and expansion of factory farms and slaughterhouses in California. The proposed law would also put a halt to the growth of CAFOs, Concentrated Animal Feeding Operations. Assemblymembers Adrin Nazarian (D-Van Nuys) and Alex Lee (D-Milpitas) introduced this bill on February 18th, 2022. It will go to a committee on March 21st. More than 56,000 people have already visited nomorefactoryfarms.com and signed a petition to support AB-2764. Others are calling and emailing their assemblymembers in Sacramento.

The bill is also gathering the support of a wide range of animal welfare, environmental and workers’ rights organizations. If passed, this bill would have a huge impact, considering that California has become one of the biggest animal agriculture states in the nation.  California has surpassed Wisconsin as the state with the highest number of dairy cows. It produced $7.47 billion worth of milk in 2020.

Tanner explained what this bill will specifically do if passed:

“It is the first step towards phasing out the destructive animal agriculture industry in California. Hopefully, that would spread to the rest of the country, and the rest of the world. It prevents any new facilities from being built or any existing facilities from expanding. Right now, it applies to any sort of commercial animal farm, or slaughterhouse, that makes over $100,000 in revenue. So, this is really comprehensive. It is targeting almost every type of farm. We might see that revenue limit change in negotiations as we try to get this actually passed through the legislature. But, essentially, it is putting a halt to the growth of this industry. Eventually, we would like to see no factory farms at all. No animal farms, and no slaughterhouses. The first step towards doing that is actually just making sure we don’t keep building new ones.”

“A lot of people are really surprised to find out that new farms, and new slaughterhouses, are being built in this day and age in California despite… knowing that it exacerbates the climate crisis, it brews disease, it exploits workers, and, of course, obviously abuses animals. Not only are they being built, California as a government is actually funding this expansion by giving these places sometimes millions of dollars to expand.”

“It would ban any new slaughterhouses over a current revenue threshold. So, maybe not the tiniest ones, but most ones and certainly any mega slaughterhouses. We’ve kind of shortened the bill text into a good slogan which is ‘no more factory farms’ but it does apply to slaughterhouses as well.”

On March 9th, 2022, a large group of Californians rallied in support of this bill at the capitol building in Sacramento. One of the speakers said:

“75% of emerging human diseases come from animals. Early last month, the USDA reported outbreaks of highly pathogenic avian influenza on a turkey farm in Indiana and, since then, outbreaks have been identified in flocks across the United States. Infected birds are killed en masse in often brutal ways that not only cause significant welfare concerns for the birds but moral distress for the people involved in this devastating process. And nothing is stopping this disease from coming to California.”

Tanner commented on the rally:

“The rally yesterday was amazing. We had a hundred thirty, maybe even more people, come. Various organizations. It was a coalition event. Direct Action Everywhere, Compassionate Bay, the Climate Movement with Extinction Rebellion and Sunrise. We had PETA there. We had Our Honor there, which is a group of veterinarians speaking out against animal abuse. So, it was a great event, and we had the Sacramento Bee cover the rally before it even happened, which is great because that is a paper that a lot of legislators read.”

“People who don’t like this bill would love for nobody to pay attention to it. So, it could just quietly die. But we are going to make sure that it does not quietly die. That’s why we had so many people come out yesterday.”

“I think that this is a bill that everybody should get behind. It’s literally one of the ways that we’re going to be able to save our planet.” – Almira Tanner, DxE

Tanner highlighted some of the reasons to stop building and expanding these types of animal facilities. Zoonoses (diseases transmitted between non-human animals and people) is one:

“We’re brewing these diseases in the US in factory farms. Right now,  we’ve seen avian flu that’s spreading across the country… Currently, it isn’t a huge danger to humans but a couple of mutations down the line, who knows? Time again people are warning us that the next pandemic is coming. 75% of the new infectious diseases are zoonotic, meaning they come from animals, and so I think people have seen the writing on the wall for this.”

Another reason the bill’s supporters want to ban new factory farms and slaughterhouses is the huge amount of water used by animal agriculture in a state that has historically grappled with drought.

“Water is very salient for people in California, not just the drought but also the lack of clean drinking water, and the wildfires that are happening — which, of course, are all related. Wildfire season feels like it’s almost all the time now in California.”

Along with signing the petition to support AB-2764,  there are other actions the bill’s supporters are urging Californians to take. Says Tanner:

“Going to nomorefactoryfarms.com and signing the petition will ensure that you get on our mailing list and find out about future calls to action. And, if you’re really motivated and you want to be on the ground, coming to rallies, maybe doing outreach to constituents… You can actually join a chat that we have where you can find out all of the alerts that happening. We use a Messenger app called Signal.”

“If you live in California you can call your legislator. Right now, we are focusing on the Assembly because that is where the bill is going to be voted on first, and you can call your Assemblymember and say, ‘hey, have you seen the recent investigation just happened?’”

“Every single person in the Assembly is going to have to vote on this. Call your assembly member.” – Almira Tanner, DxE

There has been disappointing news regarding the progress of this bill. On 1 April 2022, Direct Action Everywhere sent this statement to its supporters: “Against the will of so many Californians who fought for a factory farm moratorium, Asm. Nazarian’s office has officially decided to turn AB 2764 into a study on animal ag instead. This is incredibly disappointing given all the hard work so many people have put into advocating for AB 2764 as a factory farm moratorium. Because of these changes, the bill will not be voted on April 6th, but will likely be on the agenda at the second Ag Committee meeting in late April. We will still be showing up to Sacramento on April 6th to protest and will be updating that event page soon to reflect these changes. Obviously, you’re still welcome to promote that protest, but having hundreds of people there is not as important now. While this may very well be the end of our support for AB 2764, I hope it is not the end of the No More Factory Farms campaign. Please let me know if you have any questions or feedback!”

Get Your Tofu Scramble On!