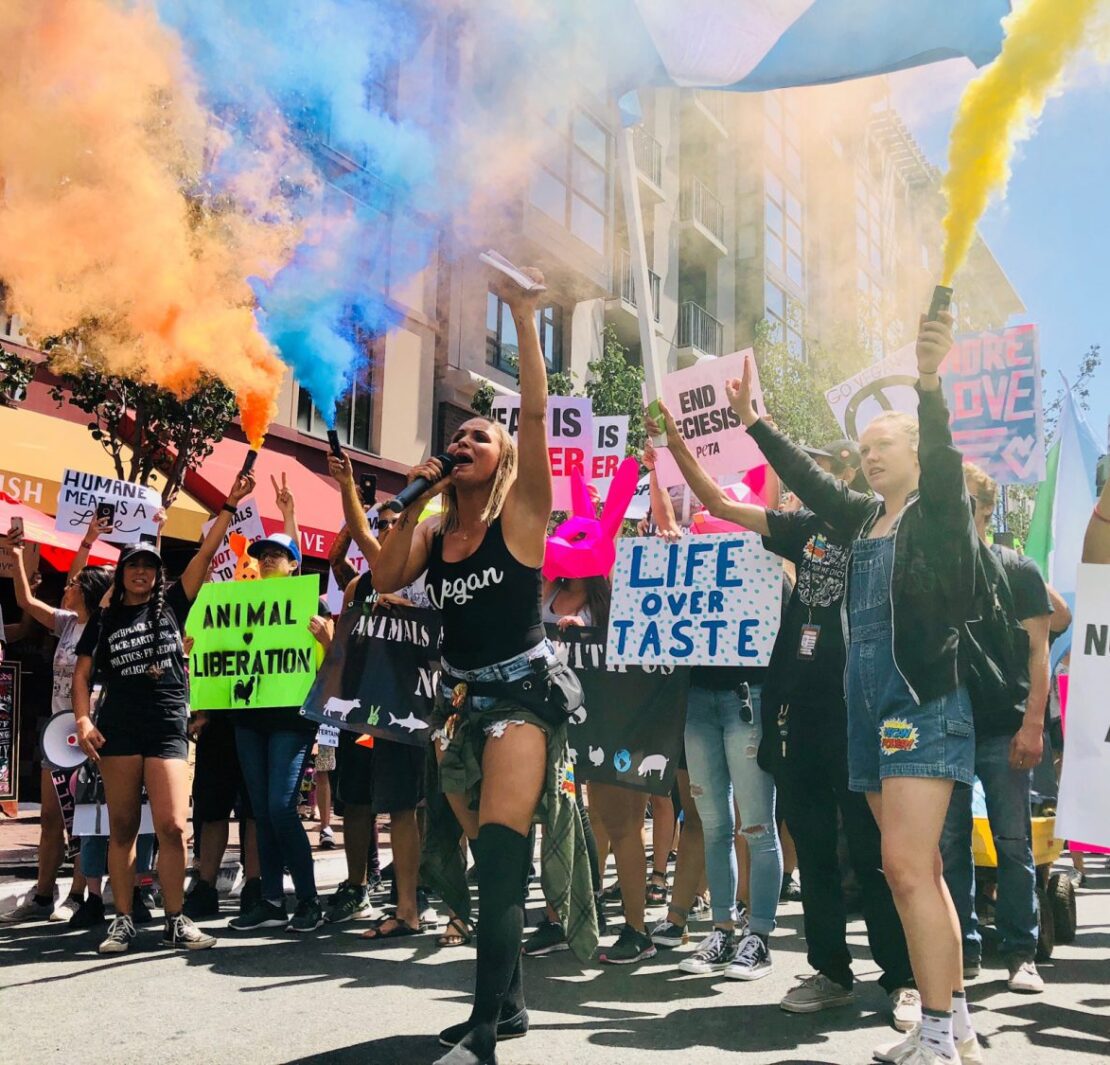 #JaneUnChained LIVE in #SANDIEGO at the Official Animal Rights March! Activists peacefully walk the streets to spread awareness and demand justice for animals! The march commenced with a great welcome speech from Brianna Martelozzo. She explains that San Diego was discouraged from hosting this march but they rose above the criticism and were ready to make every bit of an impact for the animal rights movement that they possibly can! She takes a moment of silence to remember the thousands of animals die within the time she completes each sentence. What an extremely powerful thought. We should all partake in a moment of silence daily to reflect on the millions of animals’ lives that are lost every day throughout the world.

“The Official Animal Rights March is an annual vegan march founded by UK animal rights organization Surge. The march began in London in 2016 with 2,500 vegans and in 2017 the march doubled to 5,000 vegans marching for animal liberation through London. In 2018, we’re bringing The Official Animal Rights March to San Diego, once again, to spread the message of animal liberation across the globe.”

Activists take to the streets in San Diego chanting a variety of animal rights messages. “Humane meat is a lie, animals do not want to die,” is just one of the many chants that rang out loud and clear in the streets of San Diego. “Their bodies, Not ours,” which looks forward to a day for all animals to live freely and not be property of our species. There is no doubt that marches like these will help facilitate all animal’s rights to live well and be free. “Animal Liberation Now!”

The march culminated in a large “die in” by the marchers. The “die in” demonstrates the suffering and death of all animals simply because they were born the wrong species. Activists fall to the ground in order to demonstrate unity with animals and the denial of their rights and their lives. The “die in” demonstration was also accompanied by an amazing speak out by Melanie Arce. She explains what the “die in” means, and she also goes in depth about the cruelty animals endure on a daily basis. “There is no humane way to kill someone who does not want to die.” Very well said Melanie

#JaneUnchained LIVE getting people’s reactions after the Official #SanDiego Animal Rights March. The time is now for animal liberation! End #Speciesism. Erin speaks to a handful of activists from co-organizer Brianna Martelozzo to a vegan marine, who is vegan because he loves animals. She also speaks to woman who participates in dog rescues and she believes in coming to the assistance all animals regardless of species. Erin ends the broadcast with the adorable girls in ballerina costumes asking for peace and people to go vegan for the animals. They also wish everyone a “loving day” or night, depending on the time. They are too sweet for words! Thank you to all of you who came out to take a stand for animals and marched through the streets of San Diego to raise awareness of their plight!