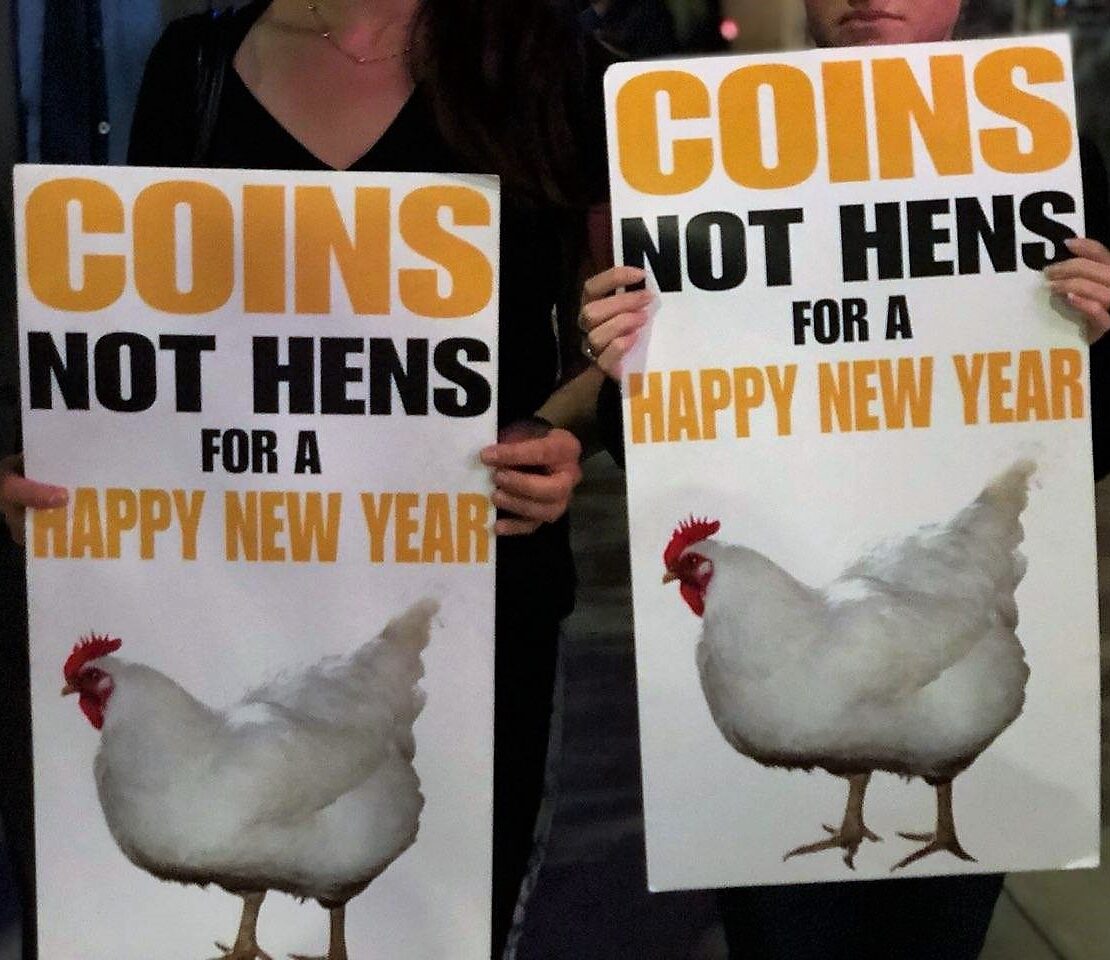 Jane Unchained News Network reports at a Los Angeles protest against a controversial religious ritual called Kapparot that involves killing chickens. Critics, including many rabbis, say it’s cruel and unnecessary because coins can be used instead. A large contingent of police set up a mobile van and fan out around the center where the ceremony is taking place.  Protesters face off against those taking part in the ritual! JaneUnChained reached out to those guarding the center seeking a response to critics but got no comment. The center is invited on any time to respond!

Patty Shenker, the woman who coined the phrase “Peace Begins on Your Plate,” argues that Jewish law prohibits the inhumane treatment of  animals. Cory Mac of Progress for Science, who helped organize this protest, explains the tradition and how ritual attendees use chickens. Rabbi Jonathan Klein further explains that the ritual was controversial from the beginning. He is organizing a fundraiser called “Coins Not Hens,” in which they raise money, instead of using hens, to give to charity.

The police say they’re unable to intervene to stop the slaughter of chickens because it’s the ritual attendees’ First Amendment right to kill these animals as part of a religious ceremony. They dismiss activist Lisa Karlan’s accusations of animal abuse, and insist they cannot enter or investigate further without a warrant. The police tell protesters they must shut down a projector light, powered by a generator, used to beam a message onto the ritual area. The police also object to a bullhorn used by demonstrators trying to get their message across as extremely loud music blares from inside the fenced ritual area. Until there is a time when all animals have rights, alongside humans, practices like these can continue. If dogs, cats, or humans were being tortured and sacrificed that day, the officers’ reactions would have been different. The ceremony would undoubtedly have been halted. “Farm” animals have almost no rights.

Jane Unchained News Network reports from the Pico-Robertson area of Los Angeles where Kapparot protestors are marching in a residential neighborhood.
Activists contend that these chickens are what are known as “spent hens” and are bought at a low price because they are no longer able to lay enough eggs to be profitable. Protester Lisa Karlan talks to police and argues that many of the chickens used in such rituals have weakened bones from laying eggs their whole lives. She tells the officers that when the chickens are handled their bones can break, literally shattering.  Gina, another activist at the protest, argues that you cannot legally kill a chicken in your home and wonders why this same rule doesn’t apply to the center.

In the next video Rabbi Jonathan Klein holds a peaceful Kapparot ritual using coin offerings to benefit the hungry instead of using chickens. Please watch and share these videos!

Jane Unchained News Network reports at a Compassionate Kapparot in West Los Angeles, California where Rabbi Jonathan Klein is conducted this service observed by some members of the Jewish community, in the days prior to Yom Kippur using coins and NOT hens.
Rabbi Jonathan Klein  describes the ritual and its origins. Kapparot means atonement. The ritual involves using an object to wash away your sins in a symbolic charitable act. Some perform the ritual with the use of animal, mostly chickens, and then slaughter them.  Most do not partake in the use of chickens. The idea of Kapparot is repentance and charity and when the chickens are killed they were supposed to be given to the poor. Under the compassionate Kapparot practice, a coin is used in place of a living, sentient being. The money is later donated  to charity.
Lisa Karlan reporting for Jane Unchained News Network.

Get your Mac Down in LA Sunday, September 23rd!