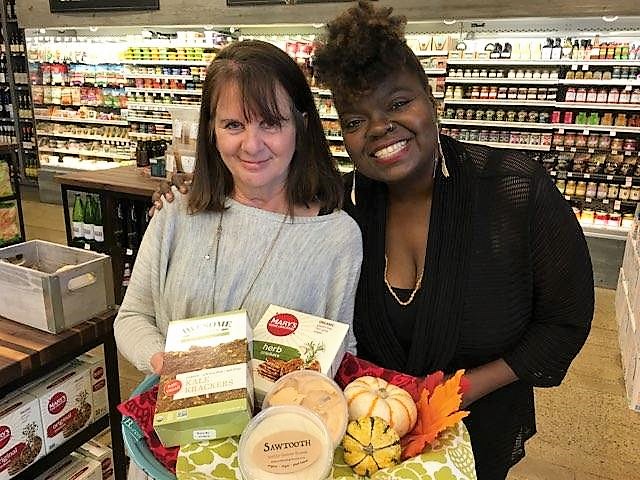 Reporting for #LunchBreakLIVE at Erewhon Market in California with the fabulous Gwenna Hunter, creator of VegansOfLA, influencing over 80,000 people with her uniquely curated events for vegans, plant-based, and pre-vegan people who just wanna have some fun! Next up is this Sunday’s Mac Down Los Angeles, brought to you by Vegan Outreach and Factory Farming Awareness Coalition (FFAC), taking place at Pollution Studios, Sunday, September 23rd at 12:30-4PM. Twelve different chefs will represent their best Mac-n-cheese! Seriously scrumptious!

Sawtooth Provisions is a family-owned business. It is all natural, vegan, and organic. Julia Muccia’s husband is the chef, and he creates their cheeses and other products. They found that there was a demand for vegan cheese after they started supplying a few markets with their products. The markets kept asking for more, so they started producing more cheese to meet the demand. Now Sawtooth Cheese is carried in several supermarkets in the Los Angeles area, and hopefully in New York soon! Julia had a hard time giving up cheese and butter, so her husband helped her by making her vegan cheese. They also have a line of vegan granolas, which was their original product. Be sure to try those too!

Come out to Pollution Studios this Sunday to attend Mac Down Los Angeles! The tickets are selling out so get yours asap! There will be many different vegan cheese companies and chefs coming to make the best mac and cheeses you may every have in your life! There will also be other amazing people at the event. John Salley is confirmed to be there as a judge! Get your tickets and come have a great time while trying some amazing Mac-n-cheese!

Tickets for Mac Down Los Angeles!

Singing For Animal Rights! The Liberation Song at The Hague!