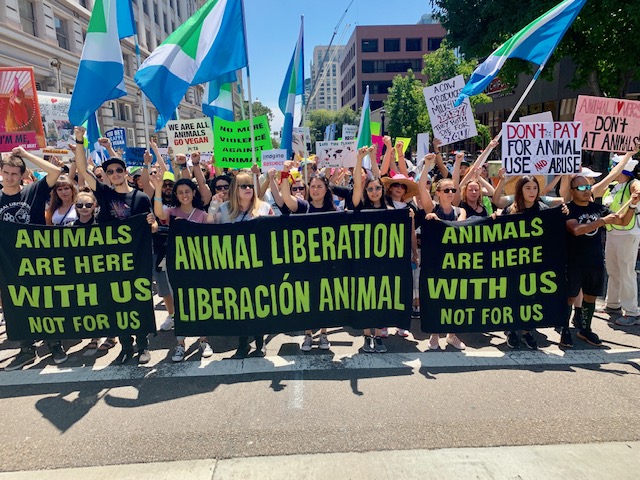 JaneUnchained reporting LIVE from The Official Animal Rights March in beautiful Downtown San Diego. Speaking now is Clifton Roberts, the Humane Party candidate and the amazing Jennifer Sale of Sale Ranch Sanctuary, an incredible sanctuary that rescues animals discarded from the food industry as well as special needs animals. Directly following the speeches we will be marching 3 miles throughout downtown San Diego with a message of peace and veganism! Our planet and the innocent sentient beings that inhabit it are being destroyed by climate change caused by animal agriculture and the needless slaughter of 70 billion animals annually, who are bred into existence for food. The time to go vegan is NOW!

Clifton Roberts has “selfishly” been a vegan for 22 years after being diagnosed with asthma. Since that time he has dedicated his political platform to fight against animal cruelty by promoting plant-based diets. Many people have asked him why he doesn’t join the Democratic Party instead of the Humane Party. Simply put, when he searched other party’s websites there were one or zero references to animals, whereas on the Humane Party’s website there were several. He refuses to compromise his values saying it would not be a victory for him if he campaigned under a party that did not focus on the issues that affect nonhuman animals.

Jennifer Sale shares her compelling experience when she witnessed the animal cruelty at a live animal auction. Her sanctuary, Sale Ranch Sanctuary, specializes in animals with illnesses. That day she rescued a baby calf, Baby Faith, that was so ill she could not stand. She was labeled a “freemartin” which is a twin female calf that may be sterile if she shares hormones of a male twin. Jennifer explains that animal sanctuaries have a vital role in the animal rights community. They not only provide a therapeutic outlet for activists to see “the happily ever after,” but they also provide a place for the general public to come to connect with the animals and their stories. People transition to veganism because of those stories alone. Please support sanctuaries and the incredibly hard work they do as part of this movement!

JaneUnchained reporting LIVE from at The Official Animal Rights March in Downtown San Diego! Our movement is taking off! Plant-based options are going mainstream. Burger King to Subway and beyond, many fast-food chains have jumped on the plant-based wagon and are offering plant-based options! Still, billions of cows, pigs, chickens, cows, turkeys, and lambs are bred into existence, tortured and slaughtered on factory farms and in labs all over the world! Let’s save them all and save the planet in the process by taking a stand! Vegan is the future! Jane Unchained contributor, Paige Parsons Roache, explains how important and powerful this event is!
“The Official Animal Rights March is an annual vegan march founded by the animal rights organisation Surge in 2016. The purpose of the march is to unite the vegan community globally and to inspire vegans to speak up for animals in their everyday lives and get active in their local communities.

In 2018 we had over 28,000 attendees marching in 25 cities across the world, demanding an end to all animal oppression. London surpassed over 10,000 attendees, a 400% increase in attendance since the first march in 2016.

TOARM is community-driven, with the mission of taking the animal rights movement directly to the streets in the thousands, united against the industries who exploit and use animals.” -The Official Animal Rights March Website

JaneUnChained LIVE at the Official Animal Rights March in San Diego, with Melanie Langston-Bazzell animal rights activist organizer for SD Animal Save, AV, Kind Heart Coalition and a Contributor with JaneUnChained News! She shares her speech calling for the end of profits from the suffering of animals for human gains. She shares that it is our duty to “bear witness” to their suffering and share the truth with everyone you know! Paige catches up to Erin who herself has started a spectacular nonprofit rescue called ALMA, Animals Lives Matter…Always. JaneUnchained contributor, Tracy Childs, is also spotted chanting along with hundreds of other activists as they march through the streets of Downtown San Diego!

A “speak out” is a few moments where an activist takes the spotlight and raises their voice to share their message about the issue they are there to end. In this speak out, the march pauses while an activist shares her powerful descriptions of the abuses animals experience as part of the dairy and egg industries.  Take a stand for all animals by joining these incredible activists by marching for equality for all beings. Take part in any activism you can from marches to demonstrations wherever and whenever you can. Most importantly raise your voice for those who cannot speak for themselves. You have the power to end their suffering and save our planet. Share, share, share the truth on your social media!
This event was organized by Brianna Baer, Melanie Langston-Bazzell, and several other amazing hard-working animal rights activists!
Visit The Official Animal Rights March website!

The animal agriculture industry is invited on to respond at any time.