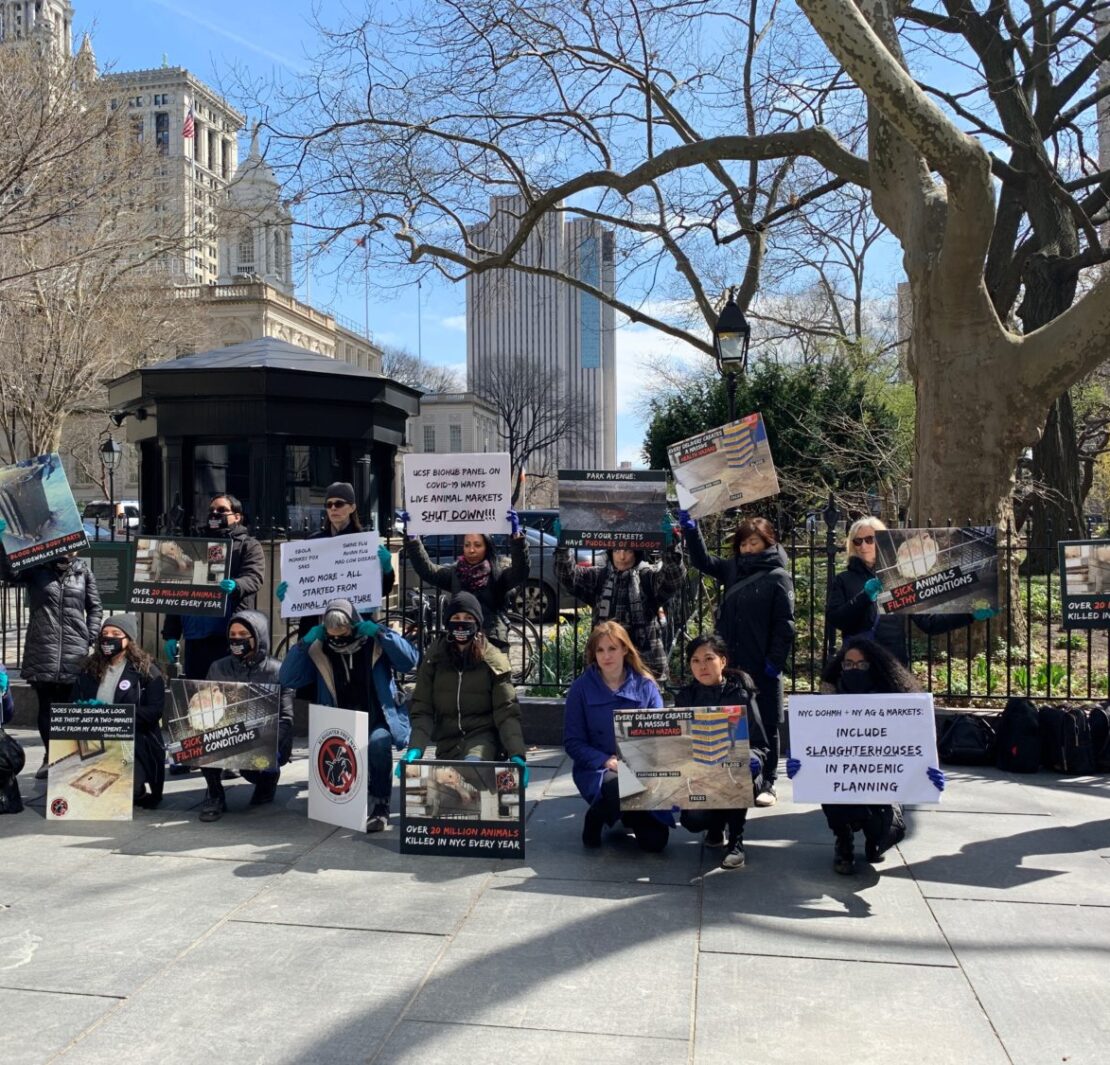 On Monday, March 16th, more than a dozen concerned New Yorkers protested outside New York City Hall demanding the city’s 85 live meat markets be closed down in the wake of the coronavirus, which began at a live meat market in China. The news media was informed of the protest in advance. Not one traditional media outlet showed up to report on the demonstration. So, Donny Moss, of TheirTurn.net, produced this report and accused advertiser-based mainstream media of willful blindness when it comes to the hazards and horrors of animal consumption.

JaneUnChained News, a 501c3 non-profit, has been doing a series of

Plant-based nutrition activists Lindsey Baker and Lisa Karlan point out that the news media also ignores the fact that animal agriculture is a leading cause of preventable, lifestyle-based human diseases. Heart disease kills one out of every four Americans and is generally caused by artery clogging cholesterol, which only exists in animal products.

Now, it is time we ask ourselves: what is the cost of ignoring this essential aspect of the coronavirus story? If we do not learn from this monumental calamity, could we be bound to repeat it? Through our society’s willful ignorance, could we be setting the stage for something even deadlier? It’s not the first time a virus or disease linked to food animals has wreaked havoc. Remember mad cow disease? Remember swine flu, which is still ongoing in China, decimating millions of pigs before their body parts can be consumed. Remember the avian flu?

There is a dangerous societal aversion to discussing the origins of the catastrophic coronavirus. While you may hear news hosts make oblique and passing references to “wet markets” that – obviously – does not tell the full story. The real story is: the virus has been traced back to a “live market” – aka a local slaughterhouse – in China. The real lesson is that the abuse of animals in the food system is at the heart of this global crisis that is fast destroying our economy, killing a growing number of people and forcing millions of others to live in isolation! An expert in zoonotic diseases described it as “nature’s revenge.”

There are some exceptions to the ‘nothing to see here’ coverage. The National Review has a headline that reads, “The Chinese Wild-Animal Industry and Wet Markets Must Go.” Their article points out that, in the wake of this pandemic, China has banned live animal markets. But the publication adds, “After the SARS outbreak in 2003, which was traced to a wet market in the southern Guangdong Province, a temporary ban on wet markets and the wild-animal industry were put in place. In July of that year, the World Health Organization declared the SARS virus contained, and in August the Chinese government lifted the ban.” In other words, the National Review is saying: China’s government did not learn the key lesson posed by SARS. That leads to the question: are we learning the lessons offered by the coronavirus?

The New York Post did tell it like it is in their investigative story about live meat markets just like the one in Wuhan, China, where this pandemic began. Here is their description of the average “live market,” aka meat market.

“In stall after stall, a mix of live and dead animals, which run the gamut from the known (pig, ox, duck, chicken) to the rare or unknown due to the condition of the carcass — stare back at you. In the wet areas of the market — usually reserved for fish and sea creatures and where the ground is slick with water and often blood — the stink is worse. The animals that have not yet been dispatched by the butcher’s knife make desperate bids to escape by climbing on top of each other and flopping or jumping out of their containers (to no avail). At least in the wet areas, the animals don’t make a sound. The screams from mammals and fowl are unbearable and heartbreaking.”

New York Post acknowledges the suffering of the animals involved. Why are we not hearing similar, accurate descriptions from news anchors at the major networks? To talk about a global pandemic without consistently discussing its origins is like holding a murder trial and rarely mentioning the defendant.

Some news hosts have discussed – in-depth – the administration’s dismantling of government response structures, which left us crippled as this crisis blossomed. How hard would it be for them to also address the root cause of the problem? If we, as a global culture, were already plant-based, this crisis would never have happened because those animals would not have been inside that cesspool of disease called a wet market. If we were a plant-based society, meat markets would not exist.

Experts believe that the virus originated in bats in China, animals ripped from the wild, kept in horrific conditions and then killed to be eaten. Here’s how NPR described it: “Patients who came down with disease at the end of December all had connections to the Huanan Seafood Market in Wuhan China. The complex of stalls selling live fish, meat and wild animals is known in the region as a ‘wet market.’ Researchers believe the new virus probably mutated from a coronavirus common in animals and jumped over to humans in the Wuhan bazaar.”

Why isn’t advertiser-based mainstream media consistently connecting the dots between this virus and the killing of animals for food? Their advertisements for meat, dairy and pharmaceuticals happen to represent the very industries that would be very adversely impacted if consumers starting thinking realistically about the cruelty and bloodshed that goes into producing the ribs, burgers, wings, eggs, milkshakes and bacon that they purchase. Are American slaughterhouses much better than Asia’s live markets? Slaughter, by its very definition, is a business that involves blood, feces, etc.

So, with the exception of some great special reports by NBC’s Richard Engel and 60 Minutes Australia, the news media continues to dance around the primal issue at the heart of this catastrophe, the likes of which we have never seen. News hosts question expert panel after expert panel, without ever having a full blown conversation about the horrific conditions at these markets and how meat markets are a global phenomenon and, therefore, a global problem. There are dozens of live meat markets in New York City, for example. Some might argue… well, they don’t sell wild animals. But, do we really know that’s true? Frogs, turtles, rabbits… they’ve all been spotted at some of New York City’s live markets. Could those be wild animals? Why is the media so afraid to touch this subject?

The philosopher George Santayana famously said, “Those who cannot remember the past are condemned to repeat it.” That philosopher also said, “All living souls welcome whatever they are ready to cope with; all else they ignore…” Right now, we – as a culture – are still ignoring the truth staring us in the face: the killing of animals for food is having a devastating impact on our world. It’s a leading cause of human illness, meaning heart disease and cancer. It’s a leading cause of climate change, habitat destruction, wildlife extinction, water pollution and water scarcity. It’s a leading cause of human world hunger because animals eat so much more than they produce as meat or dairy. Now, add to the list, it is causing the most disruptive virus of our lifetimes.

When will the mainstream media have this conversation? Hopefully, before it’s too late.

Dr Sailesh Rao, a systems analyst who was instrumental in the development of the Internet, who founded ClimateHealers.org, and who is the focus of the documentary “Countdown to Year Zero” on Amazon Prime, has a suggestion. As we cocoon, let’s think about how we can evolve to a world of non-violence and natural abundance. The answer is on our plate.

Coronavirus = Second Hand Meat Virus. Does our survival depend on veganism going viral?

17 Reasons Why You Need This Vegan Recipe In Your Life.