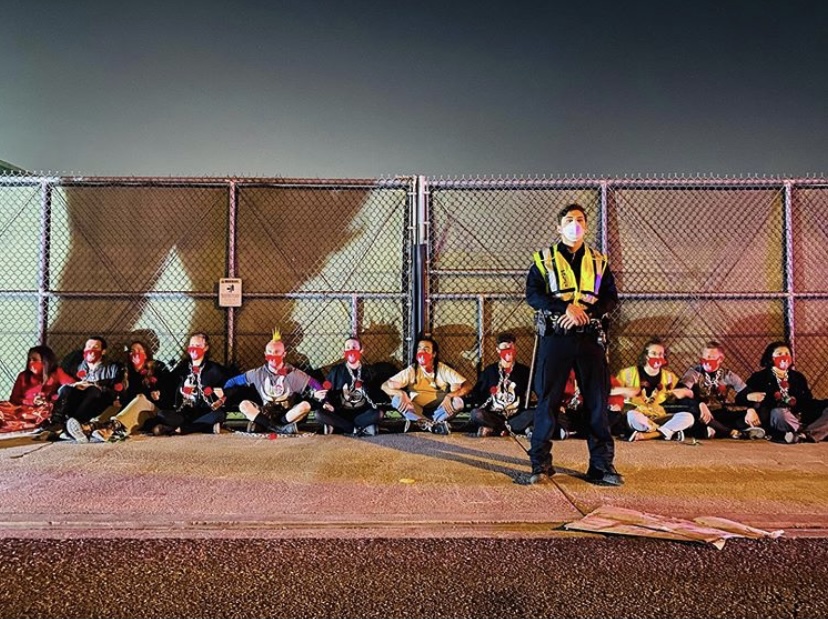 For animal rights activists, there is no greater victory than the satisfaction of shutting down slaughterhouse operations, even if it’s only for a few minutes or an hour. That’s exactly what activists say they did, in the final days of September, at a sprawling pig killing facility that lies just a 10 minute drive from downtown LA in the industrial city of Vernon, California. This death factory is called Farmer John, owned by Smithfield, which is in turn owned by a Chinese conglomerate.  The pigs, whose throats are slit by the thousands daily, are turned into – among other products – Dodger Dogs.

Animal lovers and vegan activists, outraged by the industrialized killing of pigs, converged upon the slaughterhouse for a what they called “an action” that lasted for more than three days. The highly organized event was designed and carried out by the rapidly growing Berkeley-based animal rights group Direct Action Everywhere. Dxe has been described as one of the leading threats to the meat industry. Thousands watched LIVE on Facebook as events unfolded. Check out the livestream here.

A Series of Dramatic Actions

In the wee hours of Friday morning, cops say they got a call from the pig killing facility saying some animal rights activists had gotten inside the building. The DxE operation involved activists, in hard hats, using a gurney to attempt to rescue a pig from the death house. But, the activists were spotted and found the doors closing in on them.  “Two subjects were determined to be inside the livestock yard and five subjects fled on foot,” said a Vernon Police Sgt, adding, “They [the five subjects] were then detained by officers nearby. Due to the pandemic, they were cited at the scene and released.” In that chapter of the multi-day action, 7 activists were cited for alleged trespassing.

But, what DxE soon revealed is that their organization had left the building with more than 80 hours of undercover footage showing exactly what goes on inside the pig killing plant, footage DxE said has never before been seen.  DxE then released a stunning video recap of the attempted pig rescue.

That action alone was enough to generate headlines that would last for days. But, for DxE, it was only the beginning of their slaughterhouse convergence. Over the weekend, the streets outside the sprawling killing facility were packed with animal lovers who’d erected tents and were busy holding signs and engaging with the slaughterhouse workers coming and going.

Here’s how DxE described the series of riveting events. “On Sunday (9/27) 150+ activists started an occupation outside Smithfield’s Farmer John slaughterhouse in LA. We’d just released footage of an attempted rescue from inside the facility and from a hidden camera that had been placed on the slaughter line. Police and security presence were high but by Monday evening, activists had successfully re-entered the facility, shut down the slaughter line, climbed onto the roof to unveil a giant banner, and chained themselves to the two entrance gates to prevent trucks from entering.”

Here’s how an eyewitness took in the scene as the action moved to its climax on Monday evening, nightfall being the time when trucks filled with pigs often roll in, one after the other.

“Just before the first truck of pigs rolled up to the slaughterhouse, I saw bold activists scaling the side of Farmer John’s.”

“They dropped a Rose’s Law banner  across the sickening lie of a mural that depicts happy pigs frolicking in a green pasture. As the activists sprayed colored smoke bombs from the roof, another activist informed the group that activists had locked down on the kill floor.”

“Maybe we can take a moment to think about the term ‘kill floor,” says an individual named Cameron on the DXE livestream. “Because it’s not a slanderous word that I’m coming up with, it’s an actual location. It’s a location that exists en masse, all over the planet.”

Activists Chain Themselves to Kill Floor

The activists who chained themselves to the kill floor criticized their treatment by private security.  “We were just sitting here, feet away from the victims of Smithfield who are about to be slaughtered,” says Raven on the DXE livestream. “I was screaming in pain. Tom was choking because our necks were locked. And they were blaming us for what their aggression was doing.”

And, as all that was going on, there was more drama outside. As the trucks pulled up carrying pigs, many of whom activists said appeared exhausted, dehydrated, confused and frightened, 20 activists rushed to the gate to chain themselves in front of the slaughterhouse. The group sang with roses in their hands as more and more police began to appear on the scene.

More than 20 activists were reportedly arrested. But, DxE is used to arrests and charges being lodged against their team members. Overall, the activists considered the action highly successful, saying the killing operations were severely disrupted at Farmer John’s, at least for a little while.

“A Smithfield facility in Vernon, Calif., was recently targeted by an extremist animal rights group that has no regard for the law. In this instance, after a criminal break-in, the activists endangered the safety of personnel and violated standards of animal care. These tactics are aimed at forcing a vegan agenda on Americans in a smear campaign that disregards facts, relies on a false narrative and promotes a slanted agenda aimed at eradicating animal agriculture. This criminal behavior is despicable.”

“When Farmer John’s had, this past Spring, what appeared to be perhaps the largest coronavirus outbreak in a nonresidential setting in Los Angeles County, can they really say they care for the safety of their personnel?” one activist demanded.

Calls for Moratorium On Killing

California Governor Gavin Newsom recently signed an order banning the sale of non-electric cars by 2035. Newsom knows that the planet is suffering, and is taking action. But what about the animals? What about the impacts of animal agriculture on the planet?

Smithfield claims that activists are disregarding facts and pushing a false narrative. But, that mural outside of the slaughterhouse is the real lie. Anyone from Farmer John is invited on JaneUnChained any time to respond to the protesters.