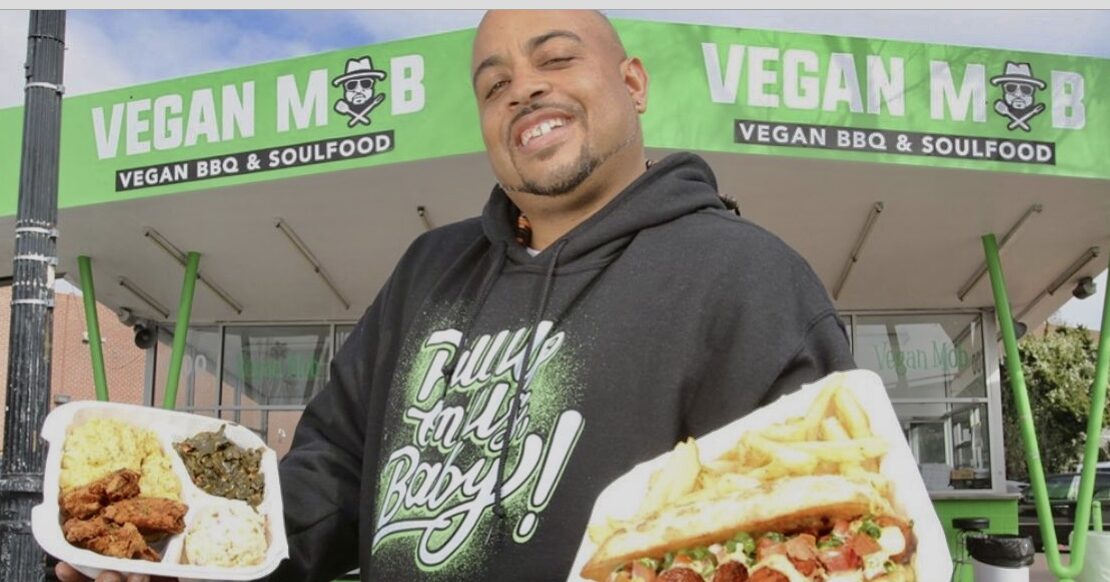 Vegan restaurants are everywhere nowadays.  Seems like there is a new one opening up on the daily.  The Bay Area has many great choices when it comes to plant-based cuisine, but if you are looking for a unique BBQ joint, Vegan Mob is just that.  It is a blend of plant-based barbecue, soul food, and Creole food, incorporating influences from Asia and Latin America.

On this episode of #LunchBreakLIVE, the owner of this restaurant, Toriano Gordon, shares with us a few of his most popular menu items, including Vegan Mac & Cheese and Vegan Ribs!  Let’s take a closer look…

Vegan Mob:  How It Came To Be

Toriano Gordon is a San Francisco native and spent his childhood hanging around his grandfather’s restaurants, Nob Hill Café and Rue Lepic. He is the chef and owner of Vegan Mob, a BBQ joint in the heart of Oakland. He always knew he wanted a restaurant of his own, but it took him three and half decades to get there–the pull of rap was stronger. At just 14 years of age, he recorded and released his first album, selling it out of his high school locker. The next year he got a deal with a local label and released a second album. He spent the next 20 years recording and performing, both as a solo act and with the group Fully Loaded.  At 38 he started a graduate program in music therapy but kept coming back to that restaurant dream. So, he left graduate school and took the plunge.

He knew it was going to be a BBQ spot because an uncle from Texas had once claimed the Bay Area didn’t have any good BBQ, a statement Toriano knew to be wrong, but wanted to disprove just the same.  The added challenge was to make that BBQ vegan since Toriano had changed his diet three years prior. He started Vegan Mob out of his truck, selling to Farmers’ Markets. The response couldn’t have been more absolute. He opened the brick and mortar just 6 months later. On the first day, with lines around the block, he sold out his entire menu within 3 hours. Wildly popular, and already a fixture of the community, Vegan Mob serves Toriano’s own brand of vegan fusion, a blend of plant-based barbecue, soul food, and Creole food, incorporating influences from Asia and Latin America. Toriano is a dedicated husband and the father to two girls. He lives in Oakland.

This vegan BBQ and Soul Food looks incredible.  The perfect kind of comfort food, especially during the winter months!  I love a good plate of warm vegan BBQ and Mac and Cheese on a cold day.  Oh yum!  The Mac and Cheese looks perfectly delicious, swimming in all that vegan cheese.  And the BBQ looks perfect in taste and texture.  If you find yourself in the Bay Area anytime soon, I highly recommend you give Vegan Mob a try.  It is such a popular place, and loved by the community so definitely worth the stop.

Thanks so much for joining us on this special restaurant edition of #LunchBreakLIVE.  I sure did enjoy this vegan BBQ filled episode.  The food looks so tasty!  It is so simple to be vegan these days, there are vegan restaurants popping up everywhere, and loads of plant-based options in the grocery stores now in much of the world.  I just love trying all the new food options and restaurants!  If you are looking for other great vegan restaurants, be sure to check out our restaurant’s section.  Until next time…