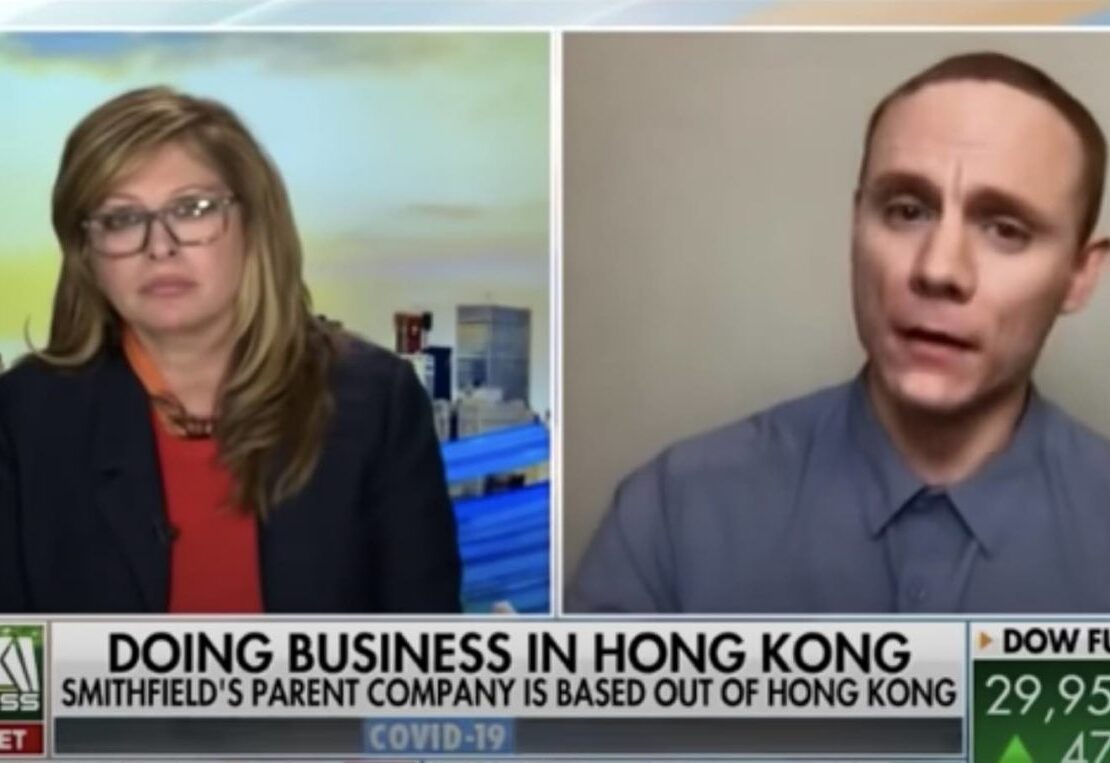 It lasted six excruciating, yet hilarious, minutes. Matt Johnson, with the animal rights group Direct Action Everywhere, posed as the CEO of Smithfield Foods, the world’s biggest pig killer, in a surreal interview on Fox Business Wednesday, December 23rd. Keep in mind, Fox Business is a major cable television network and the host who did the interview, Maria Bartiromo, is a nationally recognized TV anchor. After the interview ended, and the network realized they’d been punked, Bartiromo issued a public apology. Now, listen to Matt Johnson reveal to JaneUnChained how he pulled off this brilliant stunt.

Media Not Interested As “CEO” Confesses to Pandemic Petri Dish!!!!

During the TV interview, Matt, posing as the Big Meat boss, indicted animal agriculture in general and the pig industry in particular, calling it a petri dish for disease and future pandemics. You’d think that would raise the eyebrows of any journalist. Wait a second, the head of the world’s biggest pig slaughter company says his industry is brewing the next pandemic! That’s a blockbuster news scoop! But, no, Maria skates right by it, demanding to know how this executive will assure Americans their pork is safe. The mainstream media assumption is always, the pork will be eaten, not… should we eat the pork?

This Stunt Reveals How Mainstream Media Shills for Big Meat

This interview perfectly illustrates the Carnist blinders that the news media wears when it comes to anything involving animals, factory farming, meat or dairy. The sad truth is, virtually the entire advertiser-based mainstream news media relentlessly shills for Big Meat. Why? Look at the cable TV news commercials, largely fast food and pharmaceuticals, the two industries that would collapse if humans went vegan.

A Desperate Attempt to Sound the Alarm

For those who might say DxE’s stunt is a hit below the belt, activists counter that mainstream media is ignoring the threat of future pandemics posed by animal agriculture, whether it be in wet markets or factory farms.  The recent swine flu outbreak in China and the bird flu outbreak in England have been downplayed. Animal activists in New York City have run a long campaign to close the dozens of retail animal slaughter markets inside the city. The media refuses to report on their protests. Instead of talking about how the PREVENT the next pandemic, they talk about how we should TREAT the next pandemic.

The next pandemic, if it emanates from a factory farm, where animals are bred to be genetically similar and where they are kept in terrible conditions in massive numbers, could be much more virulent. This is a life or death issue for the entire human race. And, yet, we push it down. This stunt is a desperate attempt to get the media and the public thinking about the threat of future pandemics and the destructive role animal agriculture plays in many areas. It is a leading cause of climate change, habitat destruction, wildlife extinction, water pollution, human world hunger, and human diseases, including heart disease and cancer.

What is Direct Action Everywhere?

We invite Fox Business, Maria Bartiromo and Smithfield Foods representatives on any time to respond. We would LOVE to dialogue with them. We do agree with Smithfield’s response that, “A simple Google search for a photo of our CEO would have prevented this from happening.”