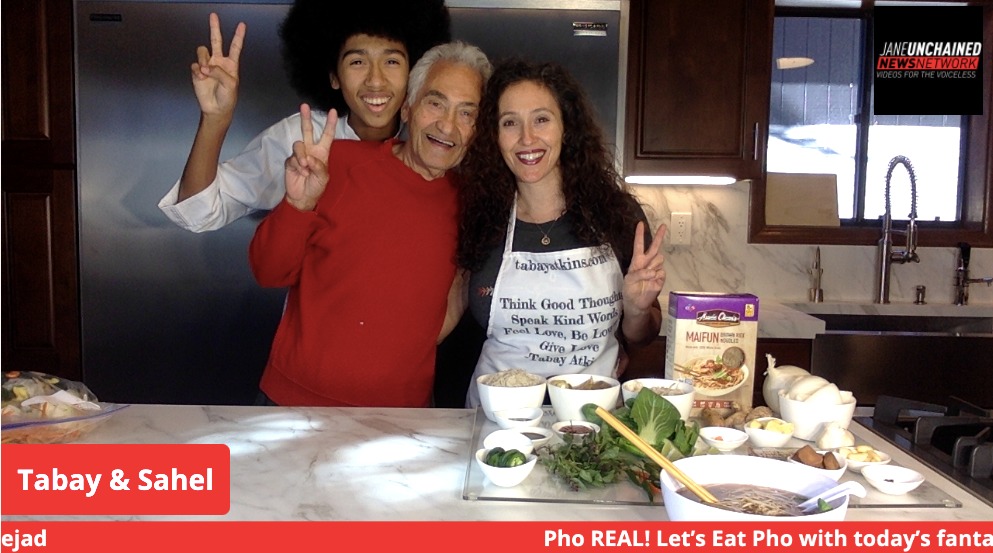 Pho REAL! It’s time to eat Pho with today’s fantastic vegan chefs Tabay Atkins, America’s youngest vegan Yoga Instructor, and his mom Sahel, cooking up a delicious Pho recipe for us.  It is vegan, healthy, and absolutely delicious.  Pho is one of my favorite comfort dishes on a cold night.  I can’t wait to see how young Tabay makes his.

Who Is This Special Young Chef?

Tabay Atkins is the youngest certified yoga teacher in America and a vegan chef.  He got his 200-hour Vinyasa certificate at the age of 10 and became a 500 hour certified Vinyasa Teacher at the age of 14. He is now 15 years old and has 12 specialty yoga certificates. Tabay has joined his mom, Sahel, on her long list of specialized yoga teacher training from all over the world. Tabay splits his time living on both Maui, Hawaii, and Orange County, California.

Up to date, Tabay has given 100% of all the money he has made, to help people who have cancer.

He teaches all over the world for events, at schools, retreats, conferences, private classes for celebrities and at people’s homes, at beaches and parks, for birthday parties, at hotels, and classes via zoom.

Tabay’s journey with yoga started when his mom was just 2 weeks cancer-free and he was just 6 years old and she got into a 200-hour Vinyasa Yoga Teacher Training. After having cancer and going through intensive chemotherapy treatments, she could barely walk on her own. She was broken down physically and emotionally. Tabay was by her side during her training and noticed how much yoga was helping make her feel better both physically and mentally. In just a short couple of months, she was able to walk again on her own and was happier and healthier than even before she had cancer. He knew right then and there that he had found his dharma and wanted to become a Yoga Teacher so that he could help heal others the way he saw yoga help heal his mom.

He has since been on numerous television shows, radio shows, magazines, and newspapers, teaching for Deepak Chopra and hundreds of his guests, celebrity clients, featured on the cover of the Yoga Journal Magazine, and so much more.

Tabay and his mom soon after became vegan, and have since started sharing their culinary skills with people around the world by teaching vegan cooking classes, both in person as well as on his online yoga and vegan cooking subscription series, tabayatkins.com

Tabay has accomplished so much in his young life, including graduating from High School 3.5 years early, at the young age of 14, with straight A’s, and a 4.0 GPA.

His dream is to continue teaching and sharing yoga and veganism all over the world, to write a cookbook and a book about his journey with his mom, to have a vegan cooking show, and to continue to inspire people, and spread love, peace, happiness, and good health to as many people as he can, and to continue to help cancer patients and survivors.

The mantra that Tabay lives by and shares by ending all of his classes with is:

Feel Love, Be Love, and Give Love”

Please visit and subscribe to his online yoga and cooking series, http://www.tabayatkins.com

Time For The Best Pho Recipe

This Pho recipe is so special, filled with many interesting ingredients and flavors.  It has white onion, cinnamon sticks, fresh chopped ginger, garlic, cloves, anise stars, fresh turmeric, and more.  I love the idea of adding cinnamon sticks to Pho soup, I imagine it brings great flavor to the soup.  And I can’t wait to try it.  Pho soup is also very easy to make, it’s all about the flavors you add to the soup and the toppings, and Tabay and his mom nailed it. 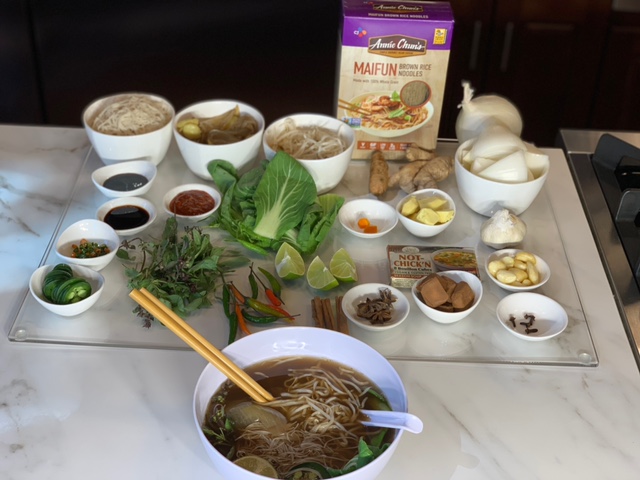 This Pho soup is filled with so much flavor, it is sure to bring you comfort on a cold winter night.
Print Recipe Pin Recipe
Course Dinner, Lunch
Cuisine Japanese

Thank You For Joining Us For Some Yummy Pho!

What a fun episode with the special young Chef Tabay and his lovely mom!  This is an easy and fun recipe to make, so give it a try and let us know how you liked it.  If you want more easy vegan recipes to try, jump over the the #LunchBreakLIVE page where we have a ton of easy vegan recipes to choose from.  Until next time…keep cookin’!