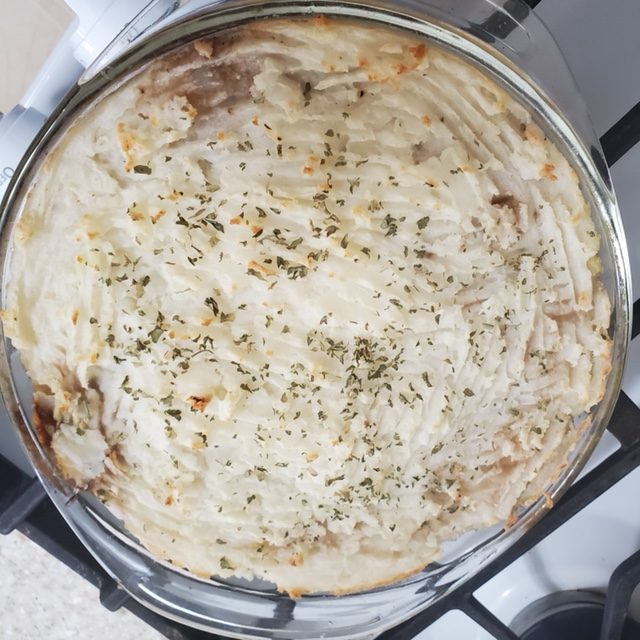 Vegan Shepherd’s Pie That Will Wow Anyone Who Tries It

Are you ready for some vegan Shepherd’s Pie on this episode of #LunchBreakLIVE with Kim Delgado making a traditional English dish, that is 100% plant-based! When Kim’s not cookin’, she’s hanging with her rescue cats, hiking her neighborhood, volunteering or working with the Los Angeles Chapter of Vegan Outreach, organizing for The National Animal Rights Day – US New Day New Chef or supporting the #JaneUnchained News team!  Some of the great products that were featured on this show are OZO Foods, Lightlife, Beyond Meat, Boca, Chobani, and Simple Truth. All of these are available in many grocery stores in the U.S. – some in the freezer, some in the meat section, and some in the refrigerated section.  Let’s take a look at how this incredible vegan meal is made…

Kim went vegan in 2014 and quickly delved into animal rights activism. Her two daughters were raised vegetarian but as young adults chose to go vegan too. Kim works for Vegan Outreach in their Los Angeles chapter, is an organizer with NARD, and helps JaneUnchained behind the scenes, with office administration. See more about Kim and the last LunchBreakLIVE she did with us where she made vegan quiche.

Have You Ever Had Vegan Shepherd’s Pie?

It is easy to make a Shepherd’s Pie vegan and Kim proved that today.  Shepherd’s Pie is traditionally a ground meat pie with a crust or topping of mashed potato. The recipe can have many variations, but the defining ingredients are ground red meat cooked in a gravy or sauce, and topped with a layer of mashed potato before it is baked. But today Kim took out all the animal products (and cruelty) and turned it into a delicious vegan version, that tastes better than ever.  The animal meat can be replaced with any plant-based beef crumble you like, and there are so many to choose from these days.  My favorite is made by Impossible Foods, but I also love Boca, Beyond Meat, and even the Trader Joes Beefless Beef brand.  Any version will work perfectly.  Let’s take a look at how Kim’s turned out. 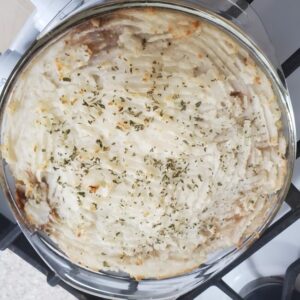 So you thought you couldn't have Shepherd's Pie as a vegan? WRONG! This is a delicious vegan version of the classic dish, packed with plant-based meat alternatives that will fool any non-vegan who tries it.
Print Recipe Pin Recipe
Course Brunch, Dinner, Lunch
Cuisine English

I don’t know about you but I am ready to make this dish, so I am off.  Thanks so much for joining in the fun.  If you are looking for more vegan recipes to try, be sure to stop by the #LunchBreakLIVE page, where we have a ton of recipes to choose from.  Until next time…keep cookin’!