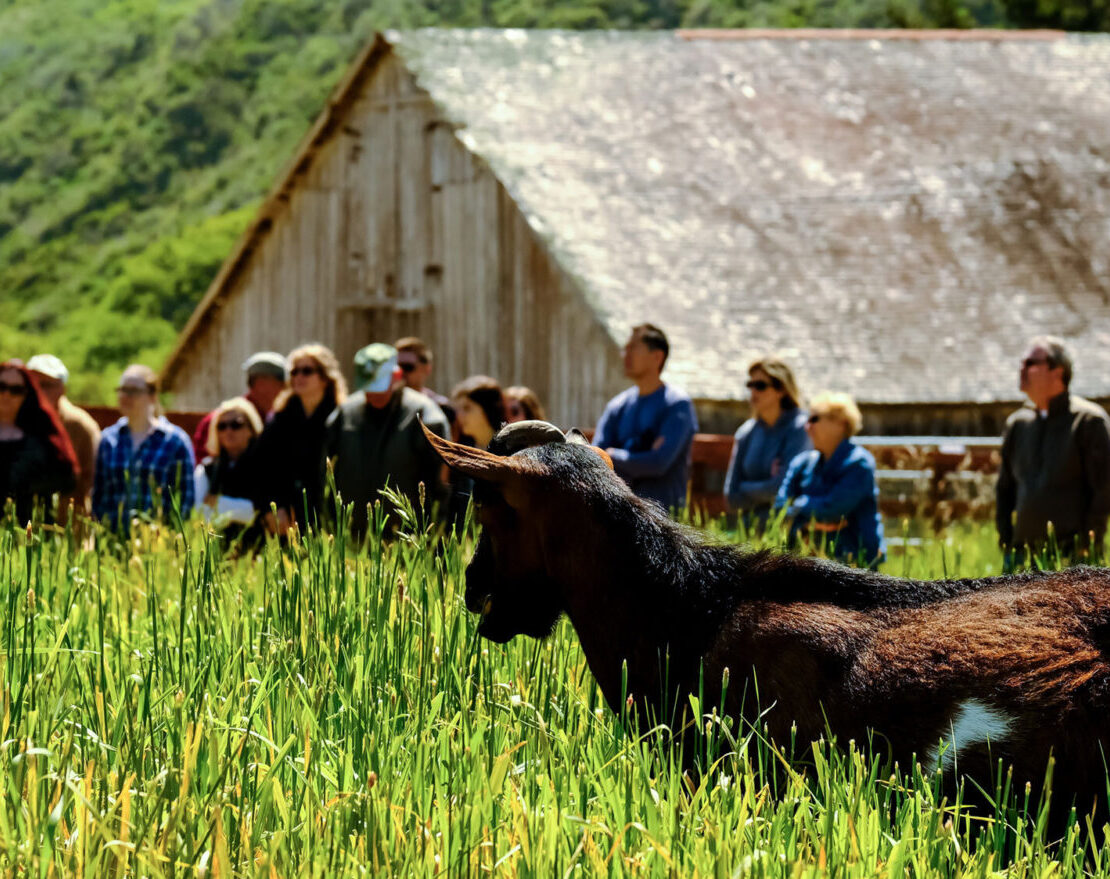 What happens if you mix a nuclear engineer, a vegan farm, and an animal sanctuary? Something quite exciting and pioneering. Something we could call Veganic Tech. Anna Sweet is the CEO of a video games company. Nate Salpeter is a nuclear engineer with a background in climate technology. When these two tech experts became vegan six years ago and decided to move into a farm outside of San Francisco, interesting things started happening.

Elysabeth Alfano from PlantBased Business Hour interviewed Nate. At the end of this article, you can watch the full interview: “Getting Animals Out of the Supply Chain: Nate Salpeter of Sweet Farm on AgTech”.

Anna and Nate created Sweet Farm, a 20-acre animal sanctuary that keeps more than 150 rescued farmed animals, such as pigs, turkeys, cows, hens, and goats. It is also a 2.5-acre farm that grows more than one hundred crops.

Sweet Farm is also an AgTech non-profit researching and investing in new technology programs. They are supporting start-ups that are working to make our food system more compassionate and sustainable on a global scale. Sweet, right?

Veganic Tech Is a New Form of AgTech

We are using the term AgTech (short for Agricultural Technology) a lot these days. But what is it? Nate explains: “AgTech is traditionally defined as technologies to increase productivity and yields…. creating a system that can feed the next two billion people that will be on the planet in the next thirty years.”

Almost like a mantra, Nate keeps repeating these three words: Planet, People, and Prosperity. They are the backbone of this project, which started in a very special place:

“One of the things about Sweet Farm is that we are in a very unique location. We are just outside Silicon Valley. We do not want to lose sight of that. But we are also in California. Big agriculture state. Our impact verticals are: education, inspiration, and innovation. Educate around what are the issues and why they are important,  inspire action and change. The third component is innovation.”

“We seek to developed innovative products and technologies that make a change in people’s daily lives, or a change in the corporate world, or the farming world. That really aligns triple-bottom-line practices: prosperity, planet, and people. If you can align those things, it’s such a powerful motivator and agent for change.” – Nate Salpeter, Veganic Tech expert

Veganic Tech will Be Part of Veganic Farming

Veganic farming is growing vegetables with the minimum input from animal products. For instance, without animal manure or pesticides.  This can be done in different ways, and different official veganic standards exist in several countries. In the US, however, most veganic farmers are not certified following any such standards. They are therefore freer to experiment. By using a small amount of cruelty-free products of animal origin, this is what Sweet Farm has been doing. Nate explains:

“A lot of people that have even been plant-based or vegan for their entire adult lives don’t realize that plant-based agriculture, especially organic agriculture, is largely propped up by animal agriculture. Fertilizers, for instance, largely come from bone meal, blood meal, feather meal, fish meal, or manure. And those commodity products come directly from animal exploitation.”

“What Sweet Farm does is Veganic Agriculture. It is a practice that was largely codified around twenty years ago. We are working with different organizations to incorporate sanctuaries into this. Because at the sanctuary, of course, our animals are producing manure. It would be a huge waste of resources as well as carbon positive to ship it off to the dump. So, we do incorporate that back in. But it’s not our primary nitrogen source. We get that from other biocyclic processes.”

As with most veganic farms, during the off-season, they plant legumes and other nitrogen-fixing crops, as a substitute for fertilizers. But, their use of manure from sanctuary animals would not allow them certification under any official international standards of veganic farming. This is because such standards do not allow animal manure of any type.  However, in the US, most veganic farmers are not certified veganic either, so they can try new things.

The Veganic Tech of Composting

Sweet Farm is pushing the envelope beyond normal veganic practices not only incorporating waste from sanctuaries’ animals but also humans:

“We do have a robust compost program out here. We integrate in the shavings from our barns, the animals have bedding, as a carbon source. And we also integrate in biochar. You take the biomass out of the wastewater treatment, you burn it at a very high temperature with very low oxygen content. And it turns 100 tones of biomass into one ton of biochar, breaking down all the pharmaceuticals, all the pathogens. All of that becomes carbon, nitrogen, phosphorus, etc. Constituent elements, benign elements at that point. And the carbon source becomes a great water retention device. We integrate it into the soil. It absorbs nitrogen from the compost pile and then releases it more slowly.”

“We have a pond where we have a whole bunch of rescued ducks and geese. A bunch of wild birds live on it as well. They all poop into the pond, which, of course, increases nitrogen and phosphorous content in the water. If you increase that content too high, you ‘eutrophie’ the water. It basically causes an algae bloom, which then leads to oxygen disparity, and it can’t support the life in that water. It’s called duckweed. We started doing some research, and we realized it is now recognized as a high nitrogen source. We are now intentionally growing it. Extracting it from the pond at a prescribed rate and integrating it into our compost program. It boosts nitrogen levels. It boosts the moisture content in it…and these floating plants cover the surface thus reducing evaporation.”

Animal agriculture creates many problems, among them farm animals who need to be rescued and looked after in sanctuaries. Plant agriculture can also cause problems by using pesticides and the erosion of soil. Industrialization drives global heating. Sweet Farm is trying to address all this.

“We are doing a number of field trials. Our first one was about five years ago. This was a little bit more on the sustainability tech than on the AgTech, but it’s a really cool project. It’s set around water conservation. We were doing research here on the farm with the most advanced fog collectors in the world. When the fog comes in off the coast, you have all these water droplets in the air. But unfortunately, in northern California, they are not falling down into the ground in a meaningful way.  So, what we did is work with an organization and we got the most advanced system that leverages biomimicry. Mimicking a specific type of sub-Saharan African beetle called the Namib beetle. Basically, these nets collected water droplets on the filaments, condensed them out, and we collected that water.”

“We work with amazing companies doing field trials. We do pilot projects out here at the farm with these companies. And then we also do a lot of things like pitch events. We want to bring in investors that don’t necessarily know about this space.”

“We have a very nimble agile team that we can adapt to new incoming projects very quickly. And execute them in a meaningful and impactful way.” – Nate Salpeter, Veganic Tech expert

Sweet Farm Helps the Next Generation of Innovators

“One of the big things we do is incubate companies and provide low-barrier entry of opportunities for them. In some cases, companies want a deeper level of engagement, and my wife and I also do some advising for these companies as well. And then there is investing as well. On that front, my wife and I have been angel investors on a number of companies. These companies are like platforms. Enablers of broader change across industries.”

New tech can work as a flashlight illuminating our path to the future. It enlightens us so we can overcome the darkness of uncertainty. With such frontline access to this light, Nate may be able to have a good view of what’s to come:

“Three years from now, we will of course see the continuation of a plant-based trend. We will see more things come into the market in the cellular agriculture and fermentation-based spaces.  There is excitement in the investment community. But I think one of the biggest trends we will see is companies that are really centered around culturally or geographically relevant foods.”

“In the AgTech space, there will be a surge in companies that focus on data generation. Companies that are solving a problem but simultaneously generating vast quantities of data. Learning about plants, and microclimates. And increasing productivity by just better understanding what land does. How it behaves in the context of certain crops. But, then, there are companies that are doing automation out in the field, and others in the warehouse. ‘OnePointOne’ is a company doing vertical farming heavily automated in collecting information along the way.”

Technology is neither good nor bad. Its ethical implications depend on who has it, who uses it, and with which intentions. If we want a vegan world, we should not allow those who work against it to have dominion over technology. Vegans should lead the new technological revolution. Veganic Tech should drive systemic change. People like Anne and Nate are working on that:

“The food system is a system. Our whole organization is built around driving systematic change by creating a system here on the farm. And we can actually use that as a showcase, and as a platform, and as an incubator for amazing technologies as well”

We need all the tools available to us to build our true, compassionate, and just vegan world. AgTech is one of them. Elysabeth summarizes it very well: