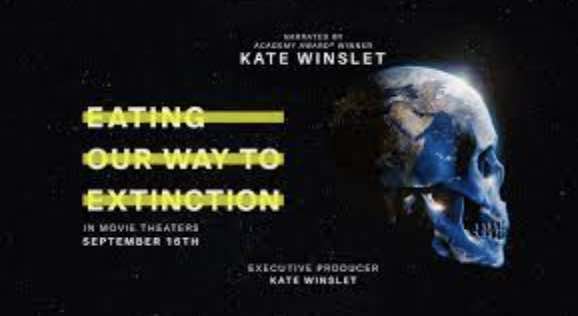 Oscar-winning actress Kate Winslet’s name has been used quite heavily to promote Eating Our Way To Extinction.

The star’s involvement not only brings global attention to this new vegan movie, but her calm narration throughout the film gives the real stars time to shine.  That’s right, it’s the scientists who are, quite rightly,  the real focus.

#JaneUnchained previewed the film in a previous article and we’ve also laid out the horrific impact animal agriculture has on the climate in this recent piece.

We got a sneak preview of the finished film. And it really does live up to expectations. Tickets are STILL AVAILABLE FOR THE ONE NIGHT IN THEATER SHOWING ON THURSDAY, SEPTEMBER 16th! Click here!

Eating Our Way To Extinction opens with an idyllic rainforest shot. However, the ominous rumblings of a chainsaw are audible in the distance… Of course, one of those beautiful trees is soon sent crashing to the forest floor. It’s this contrast that sets the tone for the whole movie.

Director Otto Brockway serves us an array of colorful and beautiful nature shots. However, we are also presented with a barrage of desolation and depressing destruction.

Eating Our Way To Extinction: 4 Years in the Making!

It delivers expert after expert taking animal agriculture to task for the mindboggling amount of wreckage this violent industry is leaving in its wake.  But this is no exercise in baseless opinions. So much research has gone into this project.

“Our diet is taking us to an abyss.”

This quote comes from the President and Founder of the Foundation on Economic Trends Jeremy Rifkin. You see, Brockway has carefully collected credible voices from the scientific, political and economic sectors to present his arguments as strongly as possible.

Infographics, dramatic maps, and graphs are powerful illustrations used throughout the film. Each one simplifies a dramatic data point. This information arms the viewer for future debates with those who doubt the link between animal agriculture and climate change.

Kate Winslet’s narration throughout Eating Our Way To Extinction is sublime. She is never unnecessarily dramatic or over the top. And her matter-of-fact delivery works perfectly. It doesn’t distract from the stark reality presented brilliantly on the screen.

I found the most hard-hitting scenes in Eating Our Way To Extinction came from the horrific conditions in fish farms.  This film busts the myth that changing from eating meat to eating fish is better for the planet.

The planet has lost 90% of all large fish since the 1950s. That’s a scary statistic. Especially when viewed alongside the cruelty of fish farms.

Brockway never shies from balancing the argument with voices from those who support subsidies to animal agriculture. In fact, we even hear from the director of the Head of Norwegian Directorate of Fisheries. The age-old omega 3 argument is also dealt with swiftly. Of course, you don’t need to eat fish to get a natural dose of this vital nutrient. Plastic gets a mention too – it’s discarded fishing gear that’s the real culprit in this case.

We also see other myths destroyed by statistics and simple facts. Organic meat is no better climate-wise than factory-farmed meat and 90% of chicken is intensively farmed globally. And, most shocking to me, 75% of antibiotics produced around the world are given to livestock!

The film is brought up to date as it discusses pandemics caused by our toxic relationship with animals and then it offers us some hope.

It isn’t all doom and gloom thanks to…  vegans! That’s right, veganism and plant-based diets have risen dramatically over recent years. Eating Our Way To Extinction proves that we are having a positive effect on the planet.

Remember, Eating Our Way To Extinction is at cinemas on Thursday, September 16 and after that, you can stream it online. You can also check out the website.

Eating Our Way To Extinction is the latest must-see vegan film. See it and spread the word. It’s as fact-heavy as the Game Changers and is as important as Earthlings. Watch it. Share it.

Vegan Bacon Minus The Pig!