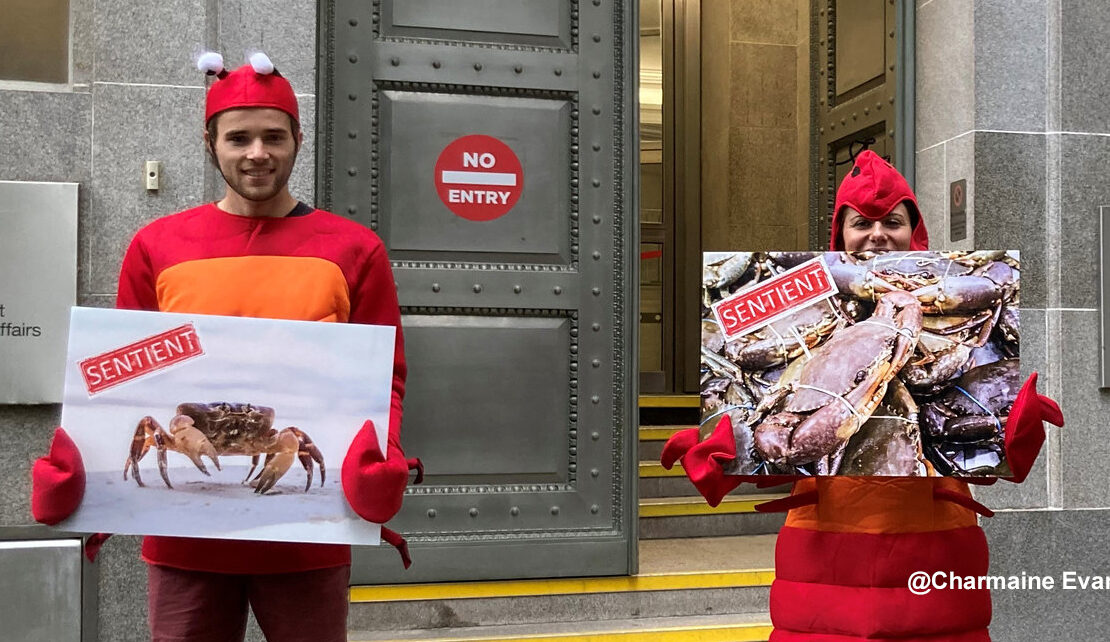 Good news for our ten-legged friends. The capital of the Netherlands has just announced another important victory for the protection of lobsters and crabs. From 2022 on, it will be illegal to sell live lobsters and crabs in any of Amsterdam’s 34 markets. And that’s not all. A ban on selling fur has been added for good measure too!

This has been achieved by Amsterdam’s progressive coalition government in power since 2018. It pledged to ban live lobster and crab sales in its coalition agreement. Victor Everhardt, deputy mayor for economic affairs, said in a press release: “In the interests of animal welfare, there will be a ban on the sale of fur and live crabs and lobsters, and it will be actively enforced.”

The Partij voor de Dieren (Party for the Animals) had proposed to improve the protection of lobsters and crabs back in 2018. It seems that now the Office of the Mayor and Aldermen of Amsterdam has agreed to take it forward. And it has already started a public consultation to implement it.

It’s not the first animal-friendly measure they have taken. The city discourages animal exhibitions and has banned the use of animals for advertising purposes. The city’s catering is also vegetarian by default since 2019.

Why Protecting Lobsters and Crabs?

Given all the different animals sold in markets, why only this ban on live lobster and crab sales? While animal activists believe all animal sales should be banned, here’s the reasoning. Lobsters and crabs are kept in captivity after capture and sold while still alive in these markets. This adds a considerable amount of suffering to their ordeal, which includes:

There is an increasing recognition that decapod crustaceans, the type of invertebrate to which lobsters and crabs belong, are sentient beings.

Yes, They Feel Pain and Suffer!

Many scientists, including me, know that crustaceans, insects and other invertebrates are sentient beings. But, a lot of people simply refuse to believe it.  Many animal protection laws in the world only include vertebrates. However, in recent years, the increasing evidence that some invertebrate animals are as sentient as vertebrates has led to putting cephalopods (octopuses, cuttlefish, and squid) and decapod crustaceans (lobsters, crabs, crayfish and shrimp) on some protected lists.

The hit film My Octopus Teacher, a 2020 Netflix Orginal, was a breakthrough event when it comes to helping the public evolve on this issue. The filmmaker Craig Foster forms a friendship with a wild common octopus in a South African kelp forest.  It won an Oscar for Best Documentary Feature.

The evidence that decapod crustaceans feel pain is overwhelming. They react to harmful situations, tend to their injuries, and give up important resources to avoid pain. They also respond to painkillers, suffer stress, and learn from painful experiences.

Before being boiled alive, people often break lobsters’ legs and tails off while the animals are fully conscious. In the boiling water, they agonize for at least 3 minutes before losing consciousness.

Which Nations Already Grant Some Protection to Crustaceans?

Canada, Australia, Italy, UK, and the Czech Republic have laws that protect octopuses and squid but not yet crustaceans. However, several countries have already given some level of protection to lobsters and crabs.

In Switzerland, the Animal Welfare Ordinance 2008, secondary regulations of the Federal Food Safety and Veterinary Office, protects decapods.  In 2018, they included specific protection from boiling as a means of killing

The New Zealand Animal Welfare Act 1999 protects crabs, lobsters and crayfish from being killed by inhumane methods. In 2021, the Parliament’s Regulations Review Committee released a report agreeing with the Animal Law Association’s position that freezing lobsters before slaughter was not consistent with the objectives and intentions of this act. Now the National Animal Welfare Advisory Committee plans to amend the law regarding the freezing of lobsters for commercial slaughter. They must be effectively stunned first and killed by mechanical methods.

Decapods are also included in the Norwegian Animal Welfare Act 2009.

The UK may improve the protection of lobsters and crabs

The UK protects cephalopods from certain experiments under the Animal (Scientific Procedures) Act (Amendment) Order 1993.  But not decapod crustaceans yet.

However, the Animal Welfare (Sentience) Bill is currently being debated in Parliament to cover the protection of animals lost after Brexit. Among other things, it could give protection to decapods from being boiled alive.

Many citizens are now lobbying politicians urging them to include decapod crustaceans in the Bill. In 2018,  55 leading experts and professional bodies plus 41 animal welfare organizations supported the Crustacean Compassion’s campaign  in an open letter to protect decapods. The British Veterinary Association has publicly accepted their sentience and supported the principle of humane stunning before slaughter.

Also, the Scottish Animal Welfare Commission recently issued a statement on animal sentience. It recognizes the sentience of decapods and cephalopods.

To lobby for the protection of crustaceans, here is a petition for UK citizens to sign.

“1.2 million decapods a day in the UK may be subject to practices which would be considered completely unacceptable in a vertebrate animal”